Catholic Priest in New Zealand: “The CCP Is Against Humanity and God. It Will Meet Its Doom”

(Minghui.org) New Zealanders commemorate Waitangi Day as a national holiday on February 1 each year. From Saturday, January 30 through Monday, February 1, 2021, to raise awareness of the ongoing persecution in China, Falun Gong practitioners held activities at two major tourist cities on the North Island, Taupo and Rotorua; at two business districts in Auckland; and at a market in Auckland's seaside suburb of Mission Bay. They also organized car tours with messages exposing the brutalities committed by the Chinese Communist Party (CCP).

“The CCP Is Against Humanity and God. It Will Meet Its Doom” 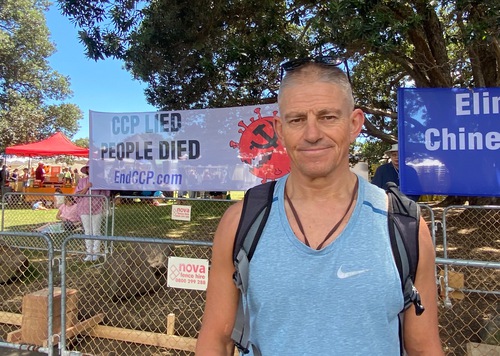 Antony Sumich, a former professional athlete who is now a Catholic priest, stopped to chat with practitioners at an information booth.

“The Western world is asleep because they think communism is just a different economic system,” he said. “But it is 100 percent evil, a product of Karl Marx’s evil ideology that was subsequently promoted by Stalin, Lenin, and Mao Zedong. These people are murderers. We think Hitler was bad enough, but the CCP is 10 times worse. It is the most dangerous thing on the planet today.

“We learn from textbooks that communist ideology is an acceptable social system but that’s all lies. It is extremely evil. I feel sad for those seeking religious freedom in China, because the regime has never stopped suppressing and persecuting all religious followers, including Falun Gong. Falun Gong practitioners are simply practicing a form of sitting meditation yet they are regarded as an enemy, a threat to its power. To my knowledge, the CCP has detained and killed many Falun Gong practitioners. They are locked up in concentration camps, their organs removed without consent, put through re-education and other forms of torture. I have been following these issues.”

Antony expressed admiration for Falun Gong practitioners’ courage in exposing the CCP's atrocities. He said: “I am very happy to see you standing on the streets today. You step out to oppose the CCP as Chinese people. We must continue to do what we should do. The evil hopes that we will be silent, it doesn’t like us protesting, so it is most important that we keep on doing this.

“I have been to Africa. I am aware that the CCP has invested in basic infrastructure in Africa and the Pacific region. One day, if these small countries are unable to repay their debts, it is very likely the regime will take over and control their countries. It will be very terrible indeed.”

He said before parting ways: “No matter what happens, I believe the CCP will be destroyed in the end because when it expands to a certain degree, it will be the start of its destruction. I hope all Chinese citizens will stand up and oppose the regime because tens of millions have lost their lives under its rule. The CCP has started a war against humanity and God. The truth is, they waged a war with God right from the beginning because it is atheist and therefore they will meet their doom.”

Let Us Fight Against Communism Together 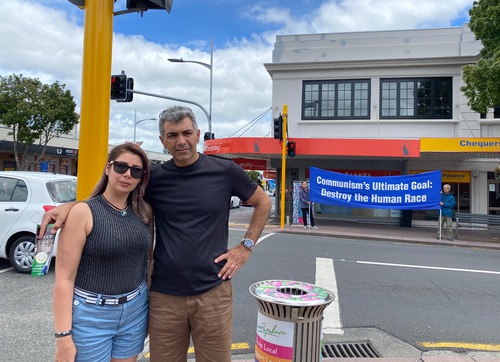 Habib Boroun and his wife Khatereh totally agree that the goal of communism is to destroy humanity.

Habib Boroun owns a paint company and his wife Khatereh is a hairstylist. They were driving past an information booth in Papakura, Auckland, and stopped to sign the petition after seeing a banner with the message: “The ultimate goal of Communism is to destroy humanity.”

Hubib said the CCP has infiltrated New Zealand and every country in the world. Communism is everywhere, so this is not a “China” problem. It is something the whole world has to face.

“We come from Iran, which is also a totalitarian government,” Hubib said. “It has close ties with the CCP because they have similar political systems. Communism manifests in various forms. In Iran, politics and religion are one. This is the same thing, the same goal as China’s Communist Party and Hitler’s Nazism. Their ultimate goal is to destroy humanity.

“Because the CCP supports Iran’s dictatorship, all Iranians dislike the Chinese. This is not right, because the bad things are done by the CCP not the Chinese people. Today, I’ve learned from you that the CCP is carrying out forced organ harvesting. That is worse. We must take part and support movements like yours. Let us fight against communism together,” he said.

Richard Kennedy-Walker is a marketing manager for a non-profit organization. He said, “I know you have done a great job. I am aware of the bad things done by the CCP. You are standing up for human rights. This is wonderful. You must let people know what is happening in China. You should express your opinions and views and share the truth with people in public spaces like these.

“The CCP organ harvesting in China is horrifying. I hope the New Zealand Government can do more to help you and stop the regime from violating human rights. I hope you continue to hold such activities in the future so that people can learn the truth,” he said.

“The Turning Point for a Woman with Chronic Hepatitis”