(Minghui.org) Today's news from China includes incidents of persecution that took place in 14 cities or counties in 9 provinces, where at least 28 practitioners were recently persecuted for their belief. 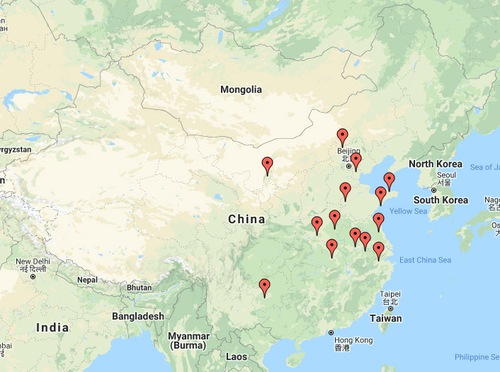 Officers from the Dongchangfu District 610 Office, the Domestic Security Division, and the Liuyuan Police Station ransacked the homes of Ms. Zhang Shuping, Ms. Wang Qin, and Ms. Guo Jinlan on the evening of November 26, 2020. They confiscated paper bills with Falun Gong facts written on them and cell phone memory cards worth about 20,000 yuan.

Ms. Wang was arrested and sentenced to three years in prison in December 2020.

Unbeknownst to Ms. Zhang, her electric car had a monitoring and positioning device installed. She recently discovered it when her car was repaired, and she now rarely drives it. A few days later, her home was ransacked.

The observers had to show their ID cards to enter, and each family was limited to one person in the observers' section. The trial started at 10 a.m. and ended at about 1 p.m.

Ms. Shi Meilan, Ms. Yu Dezhen, Ms. Chen Xiuping, and Ms. Liu Cuimei from the Huinong District were tried via video link in the No. 1 Tribunal of the Dawukou District Court on January 12, 2021. It was not clear what decisions the court reached.

Mr. Zhu Qunqun was arrested by Panhuang Police Station officers on October 25, 2020. He was transferred to a hotel the following day. Deputy head Xu Zhiliang of the Yandu District 610 Office and other officers interrogated him.

Mr. Zhu was taken to the Yancheng City Detention Center on November 3. He was officially placed under arrest by the Dafeng District Procuratorate on December 9.

Elderly Ms. Yu Quanzhen from Sheqi County was arrested by officers from the county 610 Office and the local police station on January 9, 2021. A few days later, her family found out that she was in the Nanyang City Detention Center.

Ms. Chen Daoyu was sentenced to eight months at the end of July 2020. She was transferred from the Wuhu City Detention Center to Hefei Women’s Prison on October 13.

Since February 1999, Ms. Zhang Rongxiu has been detained three times and sentenced to prison. She spent about ten years in detention centers and prison. From 2005 to September 25, 2011, she was held in Tianjin Prison.

When she was released on September 25, 2011, Beichen District 610 Office agents arranged for her to stay in Dongditou Village. They promised to give her daughter a minimum living allowance and find her a job, but they did not.

Over the past two years, officer Liu from the Xiditou Police Station and others have harassed her many times. They ordered her to give up her belief, but she refused.

At the end of December 2020, three people from the town management office and officer Liu pressured her to sign three statements and threatened that if she did not sign, it would adversely impact the future of her child.

On the morning of January 6, 2021, director Ji of the management office again pressured her to sign three statements, warning her that, if she didn’t, she would not be allowed to live in the nursing home.

Ms. Zhao Yonghong and Lu Zhentao (gender unknown) were reported to the police for distributing cards with QR codes for circumventing Internet censorship on January 10, 2021. They were arrested by officers from the Shenzhen Road Police Station in Laixi City.

The police station used facial recognition technology to identify them. Both practitioners were released right away.

Officers from the Xiangfu Police Station arrested Ms. Qin Yun while she was teaching her class at Hushu School at around 9 a.m. on January 14, 2021. She has been placed under criminal detention.

Train officials found 20 currency bills with Falun Gong information printed on them on a practitioner traveling to Xinjiang Autonomous Region in September 2019.

Under pressure, the practitioner admitted that she got the bills from Ms. Sun Shulan. The police ransacked Ms. Sun’s home and confiscated Falun Dafa books, copies of Minghui Weekly, and broken, outdated machines. Ms. Sun was released on bail for health reasons.

The Guyuan County Domestic Security Division notified Ms. Sun to go to the Zhangbei Court to process paperwork on January 13, 2021. Officers went to her home to check on her physical condition and took her blood pressure, which was high. They videotaped her and left.

On January 14, the Zhangbei County Court delivered the Zhangbei Procuratorate’s indictment to her. Under pressure, family members signed paperwork for her extended release on bail.

Ms. Zhao Mei was arrested while posting Falun Gong materials in the countryside in August 2019. She was released on bail for health reasons. Zhangbei Court personnel went to her home on January 14 and got the signature for her extended release on bail.

A fire broke out on the fourth floor of the 79-year-old Ms. Hu Guizhen’s home. She was not at home and her neighbor called the fire department. Firefighters rushed over to put out the fire and cleared out a full set of Falun Dafa books and photos of the founder of Falun Gong.

That afternoon, the local police threatened Ms. Hu, “If not for your age, we would arrest you.”

Ms. Liu Fengmei was arrested and taken to a brainwashing center by people from the Hefei City Police Department, the Yaohai District Political and Legal Affairs Committee, the 610 Office, and the Longgang Town government on December 19, 2020. She has returned home.

Although Ms. Zhou Zhijun’s period of detention has ended, the authorities are still keeping her in custody.

On January 11, 2021, her family went to the Development Zone Police Department. The police said that they had already filed the case and were waiting for the court decision.

Ms. Zhang Zhifen, in her 70s, and Ms. Xie Junmei, in her 80s, were reported to the police for talking to people about Falun Gong and distributing Falun Gong materials on January 8, 2021.

They were arrested and taken to the Wanjia Police Station. The officers took pictures of them and interrogated and threatened them. During that time the officers ransacked their homes and confiscated Falun Dafa books.

After over five hours, the police got nothing. They secured the practitioners’ fingerprints and notified their families to pick them up.

Ms. Wang Juan from the Qinggong Kindergarten was arrested on January 11, 2021. She was taken into custody in the Qixia District.