“In the Darkest of Times, You Radiated Light”

(Minghui.org) In a recent interview with Minghui.org, Ruan Jie, the owner and chief editor of the Melbourne-based newspaper Tiananmen Times, explained why the Chinese Communist Party (CCP) persecutes Falun Gong and discussed his optimism for Falun Gong’s future.

Falun Gong, also known as Falun Dafa, is a meditation practice based on the principles of Truthfulness, Compassion, and Forbearance. Due to its immense popularity, the CCP launched a nationwide campaign against the practice in July 1999. Then CCP leader Jiang Zemin vowed to eradicate Falun Gong in three months. When that didn't happen and many Chinese were actually supportive of Falun Gong, Jiang and his accomplices staged the self-immolation incident to frame Falun Gong.

However, with the staged incident repeatedly played on TV, it successfully garnered disgust, hatred, or fear toward Falun Gong among the Chinese people. The resulting hostility toward Falun Gong in China facilitated the escalated persecution of Falun Gong.

“When the self immolation hoax happened on Tiananmen Square in January 2001, we didn’t know much about Falun Gong because of the CCP’s strict censorship. We didn’t take it as seriously as we should have,” Ruan recalled the incident from 20 years ago.

Ruan later learned the truth of the persecution from practitioners in Australia. “They continued to spread the truth and many Chinese began to learn what really happened. We knew that the CCP had staged the incident to demonize Falun Gong and created an excuse to crack down on the practice. The CCP forged the event.”

Ruan’s understanding of the CCP’s actions deepened after he read the Nine Commentaries on the Communist Party. “I had a clear view of the CCP’s nature after witnessing the self-immolation farce it directed.” 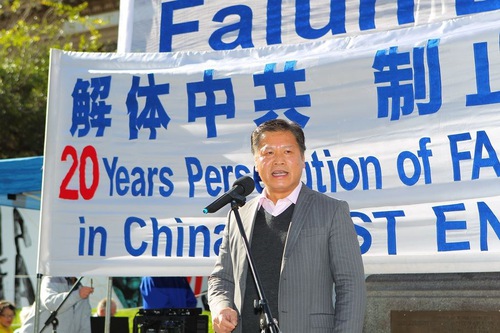 The self-immolation incident took place on the eve of the Chinese New Year. For the next 20 years, many Falun Gong practitioners risked their lives exposing the lies about the staged event, only to be arrested, incarcerated or tortured to death.

Ruan further shared his view on the CCP’s fraudulent nature and why it staged the self-immolation hoax.

Falun Gong teaches the principles of Truthfulness, Compassion, and Forbearance. “One of Falun Gong’s principles, Truthfulness, went head-on with the CCP’s fraudulent nature. That is why the CCP had to take out Falun Gong,” said Ruan.

“To protect the lie upon which the CCP based its survival, it then created a million other lies. Lies built upon lies, that is what the CCP is.”

“Many people failed to see the biggest achievement of Falun Gong in China: a just force to reshape the moral standard of society. If the principles of Truthfulness, Compassion, and Forbearance become everyone’s belief, whether one practices Falun Gong or not, there will be no place for the CCP. China will head to civilization and prosperity. Falun Gong is playing a tremendous role in bringing back traditional values.”

Ruan went on to thank the founder of Falun Gong. “Though I am not a practitioner, I am grateful to Mr. Li Hongzhi, who founded the practice. I believe that everyone should thank Mr. Li, especially the Chinese.” “For many years the practitioners have tirelessly fought and spoke for building higher moral standards and conscience in Chinese society. The nation should thank them.”

Ruan was optimistic about Falun Gong’s place in history. “History will remember Falun Gong practitioners as a light and righteous force in the darkest of times in communist China; they paved the path to return to traditional values.”

“New Understandings of the Current Situation through Memorizing the Fa”