(Minghui.org) Today's news from China includes incidents of persecution that took place in 15 cities or counties in 8 provinces, where at least 60 practitioners were recently persecuted for their belief. 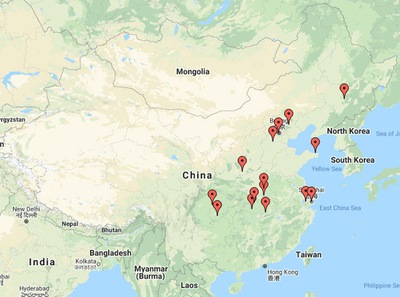 Ms. Chen Shunying was sent to Hankou Prison in Wuhan. Hankou Prison was formerly a male prison and now it has been changed to a female prison. All female practitioners from Jingzhou City were taken there.

Ms. Lu Guohua, over 70, was tried by the Wujiang District Court on the afternoon of January 12, 2021. The details are unknown.

Ms. Lu was arrested on the morning of February 7, 2020, for clarifying the truth. Her home was ransacked. She was later released on bail pending trial.

Ms. Wang Cuixia, 48, lives in Zhangjiapo Village, Beixin Township. She was arrested by officers from the Linyi County Domestic Security Division on November 9, 2020, and was under official arrest on December 6, 2020. She is currently detained in the Yanhu Detention Center in Yuncheng City and has been on a hunger strike.

Ms. Wang Guili, Ms. Qu Xiumei, Lao Jiang (gender unknown) and Ms. Liang Yudi, were arrested by officers from the Chengshan Town Police Station on January 21, 2021, for clarifying the truth in a market. They were taken to the police station around 10 a.m. and all their truth-clarifying materials were taken away from them. Ms. Wang Guili and Ms. Liang Yudi were released at 3:15 p.m. that afternoon. Ms. Qu Xiumei was released after 5 p.m.

Ms. Wu Koudi, 71, from the Yangpu District, was harassed at home by two officers around 8-9 a.m. on April 24, 2020. They threatened to take away her Dafa books and the photo of Falun Gong's founder in order to trick her into admitting that she distributed the truth-clarifying materials. Ms. Wu fell into the trap. She was then taken to the Wujiaochang Police Station and detained there for two days. She was transferred to the Yangpu Detention Center on April 26, 2020. Ms. Wu was released on May 22, 2020.

After Ms. Wu was released home, she was harassed once a week by officers from Yangpu District 610 Office around ten times.

Ms. Wu Koudi was tricked into going to the Wujiaochang Police Station by the local community member in July 2020. Her personal information such as fingerprints, blood samples, handwriting, and photos were taken.

Ms. Wu was harassed again in September 2020 by three people from the Yangpu District 610 Office.

Ms. Wu received a harassment call in December 2020 that requested a home visit. Ms. Wu said that she was not at home.

Ms. Jiang He and her parents, Ms. Yang Bo and Mr. Jiang, are currently all detained in the Xicheng District Detention Center. Ms. Jiang He has been detained for nearly two months. She is now under official arrest.

Her parents were arrested and detained by officers from the Yuetan Police Station around January 10, 2021. They were taken to the Xicheng District Detention Center on January 15, 2020.

Hao Ruihua has been arrested by officers from Niu Street Police Station on March 19, 2020, for distributing the truth-clarifying materials. Hao was released on bail pending trial for one year. Hao's salary has been suspended.

Ms. Ma Lixia and Mr. Liu Jinsheng live in Donggang Village, Chaluhe Town. They were harassed at home multiple times by officers from the Yongji County 610 Office and the the Domestic Security Division in November 2020. They were ordered to sign the guarantee statement and were taken to the Jilin City Brainwashing Center.

Ms. Zhang Xiuzhen has not been heard from since January 15, 2021. She lives alone and has been harassed and arrested multiple times.

Ms. Tan Guohua was taken from her home to the Luanping County Procuratorate by Yan Zhende, deputy of Longhua County Domestic Security Division, and the Party director of Taiying Village around 10 a.m. on January 22, 2021. Ms. Tan was previously arrested for distributing and mailing truth-clarifying materials. She was interrogated at the Procuratorate but she refused to cooperate. She was sent back home.

Some practitioners were forced to resign their jobs; some were forced to leave their homes. Some had their pensions reduced or suspended. Some of their children were implicated, losing their jobs or were unable to attend school.

Ms. Huang Xiaobo from Xinyang City was arrested by officers from the Weigang Township Police Station in Huangchuan County on September 12, 2020. She was taken to the Zhumadian City Detention Center on September 24, 2020, where she is still detained.

Ms. Qiao Donglin and Ms. Qiao Chunlin are sisters. Their parents have been harassed repeatedly by Geng Yuze, Party director of the Fuping Township Government who is very active in the CCP’s “Zero-out” Campaign. The sisters’ father was harassed and threatened in his workplace and may lose his government job. Under the high pressure, the father beat and scolded his daughters. He broke their relationship and drove the daughters out of the family home.

Ms. Ma Yonghua was subjected to forced labor. After she was released she was harassed for years. Her husband passed away after living in fright for several years.

Now there is a surveillance camera installed in front of her house. Her children and her relatives all live in fear.

Mr. Zhu Shiqi and his wife Ms. Jiang Shuyun live in Sibaihu Village, Daliang Township, Wuqing District. They were harassed around 10 p.m. on December 20, 2020. Led by Zhao Liankui, mayor of Daliang Township, several people tried to break into the couple’s home. The couple stopped them.

The next morning, these people returned to Mr. Zhu's and Ms. Jiang's home. They tore off the couplets at the gate. The village chief Yang Guoqing threatened to stop the payment of land transfer fee in order to force the couple to sign the guarantee statement. Mr. Zhu firmly refused him.

Ms. Yang Jieling and her daughter were arrested by officers from the Pingyu County Domestic Security Division on October 25, 2020. They are detained in the Zhumadian Detention Center.

“As Long as Our Mind Is on the Fa, Master Will Help Us”

“The Testimony of a Renowned Chinese Calligrapher and Artist (Part 1)”