(Minghui.org) Falun Dafa practitioners from Whanganui were invited by several organizations to celebrate Chinese New Year. The local people were able to experience traditional Chinese culture and values, while also learning about the preciousness of Falun Dafa.

The Chinese New Year activities were hosted by the Multicultural Council of Whanganui, the Education Center of the Pacific Islands and Universal College of Learning in New Zealand. 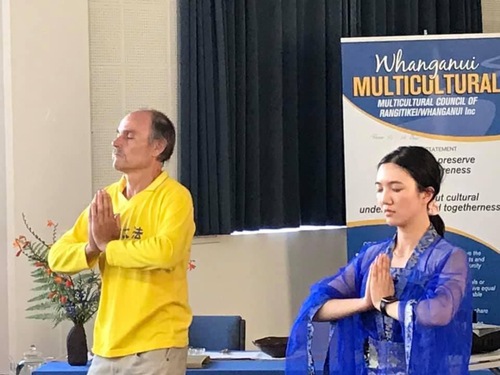 Practitioners have prepared many rich and meaningful activities including introducing Chinese culture, demonstrating the five sets of Falun Dafa exercises, tea ceremonies, making dumplings, calligraphy, and showcasing traditional Chinese dress. Their activities were enjoyed and acknowledged by the public and the event organizers. Falun Dafa's universal values of Truthfulness, Compassion, Forbearance made an impact on the hearts of the locals. When local residents were made aware of the persecution in China, many became even more supportive of Falun Dafa and expressed how much they treasured Dafa, as this cultivation practice brings hope and blessings to the world. 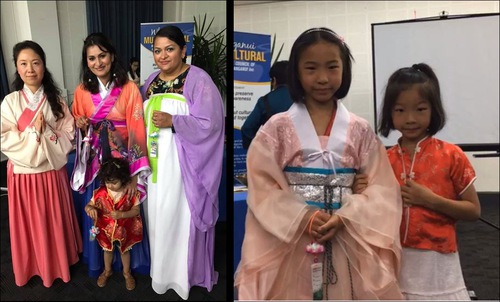 Sisters from India (left) and from Singapore (right) enjoyed the Chinese traditional costumes, and accepted the little paper lotuses that symbolize good luck.

Teachers and children at school learn how to write the Chinese characters for Truthfulness, Compassion, Forbearance.

Ms. Amihi said that she was very interested in calligraphy and Chinese traditions. After learning that Chinese culture and cultivation practice was passed down from the divine, she said that she looked forward to the Falun Dafa exercise demonstrations.

Students from the Universal College of Learning learn how to write the Chinese characters for Truthfulness, Compassion, Forbearance.

During the celebration, Falun Dafa practitioners spoke of the essence of traditional Chinese culture, and how it was destroyed during the Chinese Communist Party's (CCP) Cultural Revolution. People also learned about the cause of the current pandemic. Practitioners shared that the only way hope and opportunity could be found is by returning to tradition.

Jayson, a local activist and business management counselor, was also the Maori spokesperson during the Chinese New Year celebration. He stated that Chinese New Year symbolizes “excellence.” He said that it represented a high degree of civilization, which is also a model for the world to follow. After listening to the presentations by Dafa practitioners, Jayson said he felt that this excellence has disappeared under the current Chinese regime, and he understood how the CCP has destroyed Chinese culture.

Jayson said that he realized that a group of Falun Dafa practitioners are leading people worldwide to return to tradition. He thanked the practitioners for their contributions to the community and said that Truthfulness, Compassion and Forbearance will definitely bring hope and confidence to people during these uncertain times. 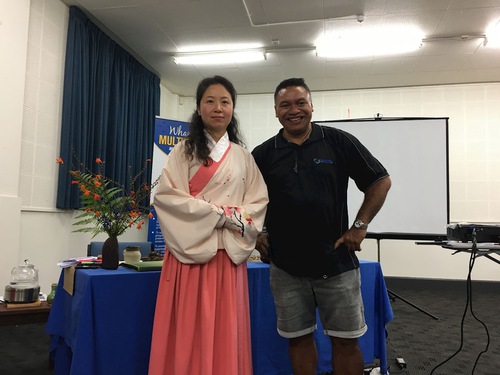 A Falun Dafa practitioner and Jayson, a local activist and Maori spokesperson for the Chinese New Year celebration

“75-year-old Retired Teacher Sentenced to Prison for His Faith”

“Listening to Master, Cultivating My Heart, and Saving People”