(Minghui.org) Today's news from China includes incidents of persecution that took place in 8 cities or counties in 6 provinces, where at least 15 practitioners were recently persecuted for their belief. 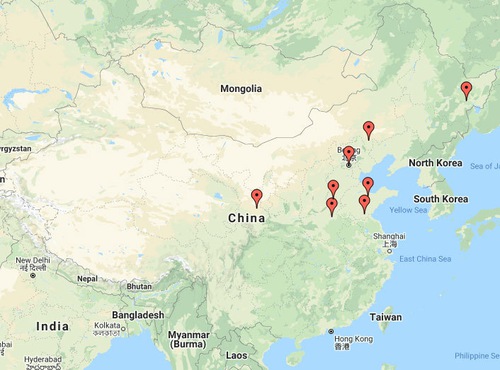 Mr. Song Baoyu from Yuanbao District was reported to the police while talking to people about Falun Gong in the Yuanbaoshan Power Plant on July 5, 2020. He was arrested and taken to the Power Plant Police Station. After clarifying facts to the police, he was released.

On July 15, the police station officers cited the incident to summon him and detained him for 5 days. On the afternoon of the release day, the officers said that there was paperwork that he had to sign. Mr. Song was tricked into going to the police station, where he was arrested instead and taken to the detention center.

Later Mr. Song’s case was turned over to the Yuanbaoshan Procuratorate. It was reported in recent days that he was sentenced to three years in prison.

Practitioner Wang Yuanmei (gender unknown) from Ji County was arrested by officers from the Pingcheng Police Station on January 19, 2021.

Wang’s family members were frightened. They cooperated with the police. Further details about them are not clear.

Six officers from the Ji County Police Department went to Ms. Li’s home on January 25 and pressured her to sign paperwork. She refused to cooperate and gave them kind advice. The group of officers soon left.

Mr. Zhang Mingzhou from Tailiu Village, Wenjia Sub-district, was recorded by video surveillance cameras when he was hanging Falun Gong banners on February 2, 2021. He was arrested and his home ransacked by officers from the Wenjia Police Station.

Ms. Ding Huaping and her husband Mr. Meng, and Ms. Ren Yanqin from Wu’an City were reported to the police by epidemic checkpoint personnel while talking to people about Falun Gong on February 1, 2021. The three practitioners were arrested by officers from the Majiazhuang Police Station.

When Ms. Ding was forced to press her fingerprints by officers, she suddenly fell down and lost consciousness. Toward the evening, she was taken to the Majiazhuang Township Health Center. Because of her extraordinarily high blood pressure, the health center refused to admit her for treatment. Officers brought the couple home at around 10 p.m. Ms. Ren was released at 5 p.m. the following day. The couple’s car was impounded.

On the morning of February 5, the police station summoned the three practitioners to the police station. They took Mr. Meng to the hospital for blood tests. The officers took his fingerprints in preparation for his detention.

Officers ransacked the homes of Ms. Ding and Ms. Ren that afternoon and did not find anything they wanted. The police station prepared to detain and fine the three practitioners.

Director Chen Yang of the Xinzhuang Township Police Station and other officers went to elderly Mr. Li Shouzi’s home and lied that they were just paying him a quick visit on March 19, 2020. As soon as they entered, they ransacked his home and confiscated a computer, a printer, and printed materials. Domestic Security officer Zhang Xiaoping ransacked Mr. Li’s home again that evening.

Mr. Li was cuffed to a tiger bench in the Xinzhuang Township Police Station for half a day and then overnight for interrogation. They also threatened him. Mr. Li was released on bail for one year due to the epidemic situation.

During the “zero-out” campaign in April 2020, practitioners and their families were pressured to write three statements. In October 2020, personnel from the 610 Office and director Chen of the township police station went to Mr. Li’s home and harassed him again.

In February 2021, officers forced Mr. Li to apply for a designated cell phone card. They also turned over his case to the Baiyin City Procuratorate. They also asked him to hire a lawyer.

At the same time, practitioner Zhang Keyin (gender unknown) was called back from out of town and pressured to write three statements by the police.

Ms. Zhang Shuzhi, in her 60s, was arrested in January 2020 for talking to people to recite “Falun Dafa is good; Truthfulness-Compassion-Forbearance is good”. She was sentenced to two years in prison later and transferred to Inner Mongolia Women’s Prison.

Division head Liu Chuanbo and other officers from the Fei County Domestic Security Division ransacked Ms. Gao Xiaolan’s home on January 14, 2021. They confiscated photos of the founder of Falun Gong and printed materials.

Mr. Wang Zongcai and his wife Ms. Wang Rulan from Dongyantou Village, Mulin Town, were arrested by seven or eight officers from the Zhaoquanying Police Station, Shunyi District at around 8 p.m. on February 4, 2021. They confiscated photos of the founder of Falun Gong, Falun Dafa books, and keepsakes.

The couple are both 73 years old. They were interrogated at the police station. They did not cooperate with the officers. On the evening of February 6, officers notified their family to take them home.

Ms. Jin Yuhong was tried by the Taoshan District Court at a detention center on November 5, 2020. She was sentenced to four years in prison. She appealed to the Qitaihe City Intermediate Court. Her case was brought to the intermediate court on January 18, 2021.

“Henan Woman Sentenced to 3.5 Years for Talking to People about Her Faith”

“I Finally Understand Why I See Other Practitioners’ Shortcomings”