(Minghui.org) Today's news from China includes incidents of persecution that took place in 19 cities or counties in 8 provinces, where at least 37 practitioners were recently persecuted for their belief. 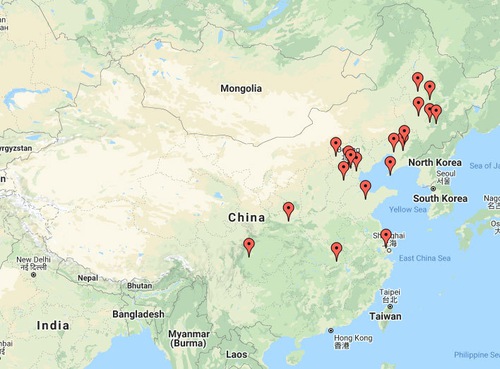 Mr. Du Yongfeng was arrested by Pulandian police on July 11, 2021. Police ransacked his home and seized all printers, Falun Gong materials, and other items. It was said that he was sentenced to nine years in prison, and he had appealed. Mr. Du is being held at the Pulandian Detention Center.

The Twelfth Ward, also known as Jiaozhi Ward, Liaoning Province Women’s Prison, is an evil ward where practitioners have been persecuted.

Ms. Zhang Xiuying of Benxi City refuses to be transformed, and has been tortured daily by wheel strategy, i.e. persecutors take turn to harass her without giving her any break in between. Guard Zhao Wenjing beat her.

For refusing to renounce Falun Gong, Ms. Jiang Wei of Chaoyang City was deprived of phone access and family visits. Guards set up “death action group,” assigning two inmates as personal monitors. The two monitored her 24-7, and restricted her from taking any unauthorized move or speaking aloud. Guard Hu told the two monitors to seal her mouth with seals and make her unable to speak if she made any unauthorized move.

Ms. Wu Juan of Dandong City, for refusing to renounce Falun Gong, has been watched by two personal monitors. The two claimed to be taking her to “study”every day. Actually they beat her in a place where no one else could see.

Ms. Gao Xiulan of Fushun City became emaciated because they intentionally starved her and forced her to stand each night.

Ms. Wang Xiangli of Linqu County was arrested in her son’s home in Nanjing City on February 26, 2020 by officers from the Pancheng Police Station, Nanjing City. She was sentenced to three and a half years in prison and fined 35,000 yuan by the Xuanwu Court, Nanjing City. She appealed.

Ms. Shen Yinglan and Ms. Xu Yafen were imprisoned in the Liyang Prison in the end of August 2020.

Ms. Huang Cui’e was arrested around 2:00 p.m. on December 12, 2020 by officers from the Jinshandian Police Station after her son Chen Zhengshun and her husband Chen Wanqin reported her to police. The officers seized a picture of the founder of Falun Gong and two media players. She was released after 9:00 p.m.

Ms. Huang and her son Mr. Chen Zhengxing were arrested by officers from the police station around 1:00 p.m. on December 13, 2020. Mr. Chen was released after interrogation and two hours detention. His cell phone was confiscated. Ms. Huang was taken to police department. Officers took her pictures and fingerprints, then forced her to undergo physical exam in a hospital, including collecting blood samples and nucleic acid test. She was taken to a detention center, but was not admitted because of her high blood pressure. She was released around 10:00 p.m.

Ms. Huang and her son have stayed away from home.

Ms. Yang Lixia was scheduled to be tried in the Third Court, Nankai Court on the morning of January 15, 2021.

Ms. Tan Yulin received a harassing call from an officer from the Beishan Police Station. The officer ordered her to report to the police station and sign a guarantee statement promising not to practice Falun Gong. She refused.

Officers from the Xiangshan Police Station and the Haidian District Police Department illegally searched the homes of Ms. Wang Chunping and her daughter, Ms. Zhen Miao around 2:00 p.m. on January 14, 2021. Ms. Wang, about 70, Ms. Zhen, around 40, and Ms. Zhen’s husband, Mr. Zhang Shida, were arrested and taken to the Qinghe Police Station. Ms. Zhen’s twelve-year-old daughter was arrested and taken to the police station at the same time. The daughter had epilepsy and very sensitive to abnormal surroundings. She witnessed the home ransacking and parents’ arrests, and was deeply hurt.

Zhou Fengyun (gender unknown) was harassed at home on January 5, 2021 by Wei Ruijun and others from the Ximalin Town government. The harassers ordered her not to say or post any thing related to Falun Gong while outside her home. They seized a copy of Minghui Weekly and a copy of an article by the founder of Falun Gong.

The homes of Ms. Liu Jialan and Ms. Zhu Minglan were ransacked by officers from the Senlin Police Station around 2:00 p.m. on January 13, 2021. The two practitioners were taken to the police station for interrogation. The interrogators tried to force them to admit to distributing Falun Gong flyers in residential buildings. They were released at 1:00 a.m.

Mr. Zhao Shaotang, 83, was arrested by officers from the Yangquanzi Town Police Station on the morning of January 13, 2021. Seven or eight officers came back to his home with him to ransacked the place in the afternoon. They seized several Falun Gong books. When they were about to leave with him, Mr. Zhou’s wife, who was in her 80s and had high blood pressure, suddenly could not move any more. Mr. Zhou also dropped on the ground weakly. His family blocked the officers from taking him away. After three or four hours standstill and a call to their supervisor, the officers left without Mr. Zhou.

Ms. Guo Lirong, who has been detained beyond time limit, was tried online in the Pi County Detention Center by the Chenghua District Court, Chengdu City, on October 20, 2020. She pleaded not guilty for herself. But the judge sentenced her to 20 months in prison on false charges. She has appealed.

After communicating with the court, their families learned the trial was suspended because none of the seven practitioners agreed to online trial during pandemic in the court. The trial will resume after the pandemic.

Five officers falsely claimed that they were neighbors and entered a practitioner’s home around 8:00 p.m. on January 13, 2021. They brought out an unfilled but stamped summon notice, and took the practitioner away.

After having been detained for 24 hours in the Tianningsi Police Station, the practitioner was taken to the Xicheng District Detention Center on January 15, 2021 and was detained for three days there.

Six practitioners, including Mr. Li Weitao, were tried by the Baita District Court on November 6, 2018. Mr. Li was sentenced to five years in prison. His relatives and friends have not heard anything about him since then. They suspect that he is imprisoned in Shenyang.

Someone noticed recently that his home was locked and on a list of owing electricity bills posted downstairs dated January 4, indicating that no one was at home.

The Renqiu Procuratorate called Ms. He’s family and ordered her to go again on January 8. Ms. He left home on January 8. But agents of the procuratorate said they did not see her. The officers from the Suning County Domestic Security Division went to her workplace on January 12, and said they would issue an arrest warrant if she no longer showed up.

Ms. Wang Jianhui was arrested for her faith in Falun Gong.

“Perpetrators Behind Staged Self-Immolation Deceived Others and Harmed Themselves”