(Minghui.org) Ms. Liu Yu, a resident of Hegang City, Heilongjiang Province, has been detained in Hegang City Detention Center for more than two months since her arrest on December 11, 2020, for practicing Falun Gong.

In the past 20 years, Ms. Liu has been arrested multiple times for her faith and detained in labor camps and a brainwashing center. Ms. Liu said that despite the persecution she has suffered, her biggest wish is for those who have participated in the persecution of Falun Gong to understand the truth and choose justice and conscience.

Ms. Liu is honest, kind, and dignified in appearance. She started practicing Falun Gong in 1995 at the age of 24. She strove to follow the principles of Truthfulness-Compassion-Forbearance to become a better person. Her depression that resulted from being robbed and beaten at her shop a few years ago was gone immediately.

Soon, her headache was healed. Her other diseases such as nosebleeds and skin allergies also disappeared.

Ms. Liu went to Beijing to appeal for Falun Gong on July 22, 1999, two days after the onset of the persecution. She was detained for 15 days when she returned home. Since then, she has been the target of harassment, which cast terror in the hearts of her husband and mother-in-law.

In late April 2002, a group of practitioners in Hegang City intercepted TV signals and broadcasted the truths about Falun Gong. The police had a big sweep across the city, and Ms. Liu was one of the practitioners arrested. Her husband was also arrested hours later and was extorted 5,000 yuan for his release. As their daughter was only 11 months old at that time, the police allowed Ms. Liu to serve her three-year forced labor term at home.

On February 15, 2010, Ms. Liu took her daughter to skate at Zhenxing Square. She was reported and arrested by the police when she was telling the venue’s owner about Falun Gong. Her daughter was scared and burst into tears. She was first detained in the detention center and then taken to Harbin Women's Labor Camp to serve a one-year term.

On July 1, 2010, the labor camp launched a new round of persecution against practitioners who refused to renounce their faith. Ms. Liu was forced to stand between two bunk beds for two days, with arms spread out in a line and cuffed to the beds, and then handcuffed in the back to a chair for four days. 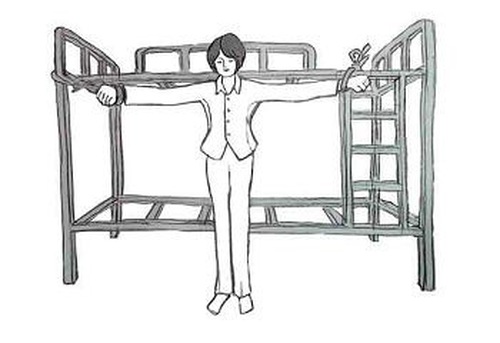 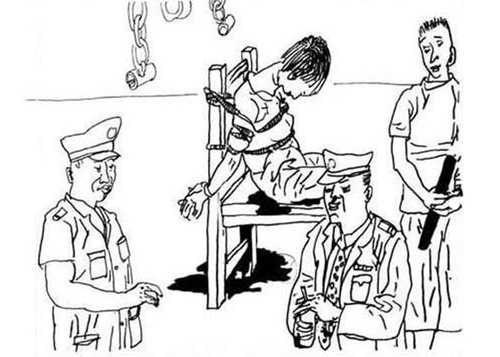 Torture illustration: Handcuffing behind the Back to a Chair

Every day, she was fed two steamed buns. She was menstruating during that time, which made the torture even more excruciating. The torture caused both her hands and legs to be severely swollen. Her arms were numb and her shoulders hurt all the time. When the handcuffs were taken off, she could not move her arms at all.

The labor camp extended Ms. Liu’s term for one month with the excuse that she refused to renounce Falun Gong. On March 16, 2011, when the additional one-month term also expired, Ms. Liu was taken to the newly opened Hegang Brainwashing Center for further persecution.

Gu Songhai, the director of Heilongjiang Province 610 Office, spent one afternoon talking to her and tried to persuade Ms. Liu to give up her belief. When the tactic failed, they forced her to stand for hours and threatened that she could not get sleep if she did not give up Falun Gong.

Gu also ordered her to watch videos that slandered Falun Gong and read derogatory books. When Ms. Liu refused, she was slapped with a book and forced to stand for one whole day. Under both physical and mental persecution, she was forced to sign the renouncing statements against her will. Only after signing the statements was she allowed to sleep.

Ms. Liu declared that her statements were null and void the next day. Gu was angry and slapped her hard in the ears, causing drumming in her left ear for three months.

Later, another guard Zhang Zilong handcuffed her hands behind her back, with her left hand up and right hand down. He brutally kicked her and slapped her. He also forced her to tear her solemn statement and sign the renouncing statements again. 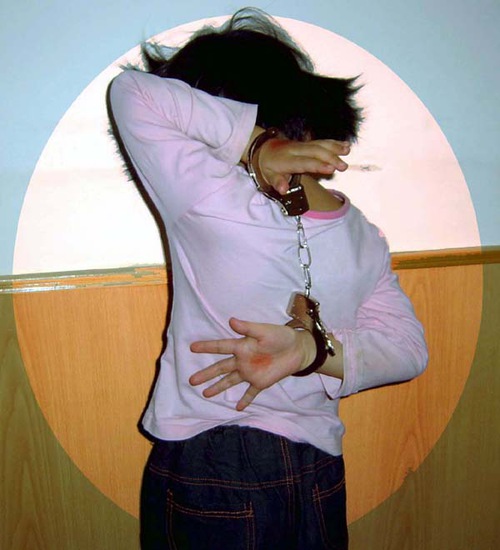 Torture Reenactment: Handcuffing Behind the Back

Ms. Liu was detained in the brainwashing center for 55 days and denied family visits. She was still harassed by the local 610 Office six months after she was released. The harassment severely affected her family life, causing her husband to divorce her.

Ms. Liu was arrested one more time in 2015 and detained at Hegang Detention Center.

She found a one-month temporary job as a maternity matron in Beijing and was about to start working on August 15, 2016. She visited her younger sister in Changchun beforehand and planned to take a train from there to Beijing on August 15.

The police, however, tracked her down and drove to her sister's home on August 14. They didn't leave until they confiscated her ID and made sure she had refunded her train ticket. They returned the next day and gave back her ID. Since Ms. Liu wasn't able to travel to Beijing on August 15, she lost the job and suffered a financial loss of 24,000 yuan, which she'd have earned from the job.

“Seven in an Extended Family Detained for 1.5 Years for Their Faith, Still Awaiting Verdicts in Custody”

“Saving Sentient Beings During the Pandemic by Ordering Takeout”