(Minghui.org) Today's news from China includes incidents of persecution that took place in 17 cities or counties in 10 provinces, where at least 92 practitioners were recently persecuted for their belief. 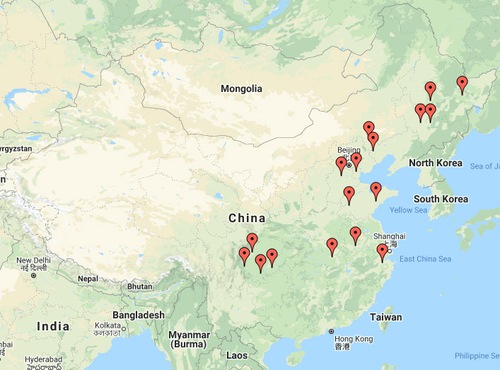 Ms. Su Xiuying, 48, from Pengnali Village, was arrested and detained on October 19, 2020. Her arrest was conducted by police officers from Jining City and Liangshan County, as well as village Party director Pang Wenhai. It was recently learned that Ms. Su has been sentenced to three years in prison and is detained in Shandong Women’s Prison. Her family is not allowed to visit her.

Ms. Qiao Yinglan was arrested by officers from the Xiyao Police Station on October 27, 2019. She is now under official arrest. The case has been transferred to Lingyuan City Court.

Ms. Hu was arrested by officers from the Longquanshan Road Police Station on August 22, 2019, for giving a copy of truth-clarifying materials to a passer-by. Her home was ransacked. Ms. Hu was scheduled to be tried in the Jingyang District Court in April 2020. She was later released on bail for one year, pending trial.

Ms. Li Shihong was followed by two plainclothes policemen and was taken to a car near the gate of a community. Her current whereabouts are unknown.

A tracking device was installed under Ms. Li’s electric bike by officers from the Guanshan Police Station.

Mr. Liu Liankun has been detained in the Beichen Police Station for more than one year. His wife, from Dazhangzhuang Township of Beichen District, was harassed at home on January 11, 2021. Two village officials came to Mr. Liu’s home. They threatened Mr. Liu's family and said that he would be sentenced to six or seven years in prison, but the sentence might be reduced if his wife signed the three statements on his behalf. If she refused, she would lose her pension or even be arrested. His wife refused to cooperate with them.

Ms. Guan Jinmei, 83, had her home raided at around 3 p.m. on January 22, 2021. Five officers from the Baogong Police Station broke into her home. Without showing any IDs, they searched her home and took away her Dafa books.

Ms. Shi Xuehong from Yi County was harassed at home on January 8, 2021. Wei Peng, director of the county urban management office, and village officials came to her home and pressured her to sign the guarantee statement, which she refused.

Ms. Shi was harassed at home again on January 21, 2021. Jing Mingzhong, head of Chengqu Police Station, and Wei Peng came to her home again. Ms. Shi still refused to sign the guarantee statement. Instead she clarified the truth to them.

Ms. Yang from Gaomo Township was harassed at home on January 20, 2012. Ma Changbao, deputy of Gaomo Township Police Station, came to harass her. She was threatened and told that her daughter would be disqualified from taking the civil servant exam if she refused to sign the guarantee statement. Ms. Yang did not cooperate.

Ms. Zhang Jinrong from the Lujiazhuang development zone of Yi County has been harassed multiple times by local village officials and people from the county urban management office. Under extreme pressure, Ms. Zhang’s son signed the guarantee statement on behalf of his mother.

Ms. Zhang said that it was void. They told Ms. Zhang to just say one word in front of the video camera as proof that she agreed. She refused. Now people from the urban management office keep calling Ms. Zhang’s family members, saying that they need to finish the task assigned by their supervisors.

Ms. Zhang Jinfeng and Ms. Liang Ying live in Nanqi Village, Tang Lake Town, Yi County. They were harassed at home by village officials including Jia Chen on January 21 and 27, 2021. They were pressured to sign the guarantee statement.

Ms. Wan Wenxia lives in Wuzhuang Village, Tang Lake Town, Yi County. Her son was harassed by village officials and threatened that his children would be implicated because of his mother. Her son was frightened and had a big argument with his mother.

Mr. Jia Dong and Feng Zhaoyang (gender unknown) were harassed at home on January 22, 2021. The Party director in Xishanbei Township came to harass them. They were told to give up practicing and they would be videotaped.

Mr. Song Guangcai from Taiping Village was harassed at noon on December 31, 2020. Several people broke the lock and entered Mr. Song’s home. They took away all his Dafa related items including books, CDs, media players, etc.

The following day, on January 1, 2021, led by Wang Long, head of the town political and legal affairs committee, four people came to Mr. Song’s home. Mr. Song was ordered to sign the guarantee statement, which he refused.

Mr. Song was harassed again by Wang Long on January 7, 2021. These same people returned and searched his home again but did not find anything. They threatened Mr. Song and said that all three generations of his family would be implicated.

Ms. Xu was tried in the Shengzhou City Court on December 22, 2020. During the trial her family saw that she looked emaciated and very weak.

Mr. Liu Haibo was tortured to death years ago for spreading the truth via TV broadcasts. His youngest sister Liu Ying and his older sister Liu Yan, who began practicing Falun Gong one year ago, were arrested in Songyuan City in September 2019. The sisters were put in Jilin Women’s Prison at the beginning of January 2020. They were later fired by their workplaces.

Ms. Liu Ying has been taking care of their over-80-year-old father, Mr. Liu Haibo’s son and her own son. Both her nephew and her son are in the last year of their high school and are preparing for their college entrance exams.

Ms. Shen Guixiang lives in Tangfang Village, Shuangfu Town. She was arrested by officers from Jiajiang County on January 22, 2021. Her home was ransacked. She is currently detained in the Jiajiang County Detention Center.

Ms. Chang Xiuhua, 52, was harassed by officers from the county domestic security division including Li Xiaolin, head of the division. Her home was ransacked and some personal belongings including two printers, a computer, a drivers license, and truth-clarifying materials were taken away. She was subjected to six-months of residential surveillance. The surveillance camera was installed inside her home.

Ms. Chang was made to pay a one-year bail around August 20, 2020 and her travel was restricted. She cannot leave China. The bail deposit was 5000 yuan.

Her one-year bail was canceled in December 2020. Ms. Change was put under criminal arrest. However, she was rejected by the detention center due to her poor health condition. Her bail was then resumed.

The case against Ms. Change was filed to the Huanan County Procuratorate and was taken to the procuratorate for inquiry by Li Xiaolin, head of the county domestic security division on January 21, 2021.

Nie was harassed on January 25, 2021. Nie was called to the sub-district office about the pension issue but instead was scolded by two men there.

Ms. Jiang Xiaoyan, around 60, from Shuangcheng District, was detained in the Heilongjiang Women’s Prison.

Ms. Jiang was sentenced to 14 years in prison in Shuangcheng District Court on November 13, 2011. She was detained in the Heilongjiang Women’s Prison for nearly two years when her old illnesses recurred. She used to have uterine fibroids and rectal cancer. A large tumor as big as a bowl grew on her abdomen. Her life was in danger and she was allowed to be bailed out for medical treatment. The tumor disappeared after she was released, read the Fa and did the exercises.

She was taken back to prison in October 2017. After the coronavirus began spreading, there has been no news about her current situation.

Ms. Li Jinxia has been harassed and arrested multiple times.

Ms. Li Jinxia was arrested at home by officers from the Kanjia Police Station during Chinese New Year of 2005. Her home was ransacked. She was extorted 6,000 yuan.

Ms. Li was harassed by village officials and police officers in Spring 2015. She was called to the village office and was pressured to give up practicing Falun Gong.

Ms. Li was harassed at home by police officers in July 2020 during the “Zero-out” campaign.

Ms. Li was taken to the Kanjia Police Station by seven officers around 5 a.m. on January 15, 2021. Afterwards, she was taken to a hospital for a physical exam. The detention center refused to accept her because of her high blood pressure. She was released around 8 p.m. on January 6, 2021. For nearly 40 hours, she was not provided with food or water, and she became very weak.

Ms. Wu Zhixue received a summons from the Chuanying District Court, so she went there on December 23, 2020. She was arrested and taken to the Jilin Detention Center.

Ms. Yu Cairu lives in Shuidi Village, Xiajiadian Township, Songshan District. She received a harassment call from Wang Chun from the Shuidi Village Police Station. She was told to sign the guarantee statement, otherwise she must move to another place.

Ms. Yuan Fenghua from Aohanqi was forcibly taken to the local sub-district office on November 24, 2020 while she was walking down the street. Two people held her arm and tried to force her to sign something.

Ms. Liu Yujie in Dalian City received a harassment call from Gong Chanxing in the Aohanqi Police Department. Ms. Liu was told to come to the station to sign the three statements.

Ms. Wu Hongqin was harassed at home on December 10, 2020. Five people from the Sidaowan Town government and the village office came to her home and forced her to sign the guarantee statement. The village Party director threatened her that her land would be confiscated and both her sons' government jobs would be in jeopardy if she refused to sign the statement.

Ms. Tao Qingmei was harassed in early January 2021 and her daughter's job was threatened.

Twenty-eight practitioners from different villages in Cuihuangkou Town, Wuqing District, have been harassed by officials from the village office, the town government and the district government.

Ms. Tan Jiang’e was harassed at home at the end of July 2020. Village official Ren Hongchang came to her home and demanded to know her son's address.

Ms. Wen Xiuzhen and Ms. Tan Jiang’e were harassed at home on October 15, 2020. Village official Ren Hongchang and Liu Fuyuan came and pressured the practitioners to sign the three statements.

Ms. Tan Jiang’e was harassed at home again by twelve people on October 21, 2020. Ren Hongchang and Liu Fuyuan led the district officials and town officials. They pressured her to sign the three statements.

Ms. Wen Xiuzhen was harassed at home again at the beginning of November 2020. Ren Hongchang led several people to her home.

Ms. Wen Xiuzhen, Niu Sutian (gender unknown), Tan Jiang’e were harassed at home on November 23, 2020. Ren Hongchang and Liu Fuyuan threatened the practitioners and said they would cut off their water, electric, and gas supplies.

Ms. Wen Xiuzhen and Tan Jiang’e were harassed at home on November 24, 2020. Ren Hongchang, Liu Fuyuan and the director of the town comprehensive management office came to videotape the practitioners.

Niu Sutian (gender unknown) was harassed at home on December 16, 2020. Five village officials led twelve officials from the district and town government. They went to the practitioner’s home. They took away Dafa books and the photo of Falun Gong's founder. The next day on December 17, 2020, several people returned and pressured Niu to sign the three statements.

Ms. Liu Shuying, Ms. Feng Yuying, and Ms. Han Keting were harassed during October to December 2020. Because they refused to cooperate, the town government officials instigated the village officials to stop their benefits.

Ms. Yu Junping and Mr. Han Jinling were arrested in December 2020. They were detained in the Wuqing District Detention Center for 15 days.

“On Controlling the Pandemic”