Germany: Engineer Thanks Master and Recalls His Cultivation Journey

(Minghui.org) As Falun Dafa practitioners around the world express their gratitude and send greetings to the founder of the practice Master Li Hongzhi during Chinese New Year, engineer Hua Chen also expressed his deep appreciation. 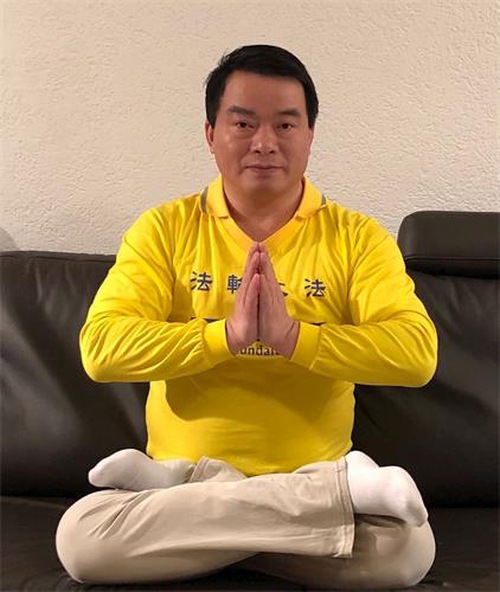 Chen lives in Stuttgart and is a mechanical engineer. He learned about Falun Dafa when he was an undergraduate student in Northeast China in 1996. He began practicing in 1999. As the CCP virus (coronavirus) continues spreading fear, Chen said he has no anxiety. Instead, he is filled with appreciation and gratitude to Master.

Chen said his university roommate practiced Falun Dafa. Chen was curious when he noticed him reading Zhuan Falun every evening. He asked what the book was about and if he could borrow it.

After reading Zhuan Falun, he thought the principles were profound even though he'd never heard of some of the terms. His roommate showed him how to do the exercises. The first time he meditated, he could cross both legs and sit the same length of time as his classmate. He then joined the local morning group practice in a park.

Chen told his girlfriend (who later became his wife) about Falun Dafa and showed her Zhuan Falun. Like Chen, she said she did not understand much of what Master talked about. However, she said she smelled a wonderful fragrance as she held Zhuan Falun.

Chen became very busy—he had to write his graduation thesis and learn to speak German. While he was preparing to study abroad, he stopped practicing Falun Dafa. In 1998, his girlfriend joined him in Germany.

One day in 1999, as Chen’s language class watched the news on TV, he was surprised to see a report about the April 25 peaceful appeal of Falun Dafa practitioners in Beijing.

Chen contacted his former roommate and learned that he'd participated in the appeal. His classmate explained why practitioners went to Beijing.

On July 20, 1999, the CCP (Chinese Communist Party) started to persecute Falun Dafa. The director of the Chinese student association at his university told him that Falun Dafa was banned in China.

Chen said all the Chinese students read the overseas edition of People’s Daily (a CCP state media), which carried negative reports about Falun Dafa. “The newspaper reports I read were absurd and unbelievable,” he said.

“I recalled going to group exercises in the morning. The atmosphere was always very solemn and sacred. It was nothing like the CCP claimed it was,” Chen said.

“Minghui.org was set up. From the website, I learned about the CCP’s brutal persecution and told the director of the Chinese student association.”

Chen no longer had a copy of Zhuan Falun. He found it online, downloaded it, and printed it out. Because he was so busy with school, his girlfriend wondered why he took time to read Zhuan Falun every day.

“Because the CCP began persecuting it, I suddenly understood that Falun Dafa was very precious. After reading the book, I felt better. I also showed the book to my German teacher.

“The CCP always persecutes good things—so I knew the persecution was absurd! I was determined to practice it.

“If Falun Dafa was as bad as the CCP claimed, why did nearly 100 million people practice it? So many highly educated people—professors and people with Ph.D. degrees practiced Falun Dafa. I refused to believe that so many people were ignorant or deceived as the CCP claimed they were. It was impossible. Thus, I felt Falun Dafa must be very good.”

Just before Christmas, Chen called a practitioner in Berlin. “Even though it snowed, two practitioners from Berlin came to our city to teach us the exercises. We set up a group practice site in Magdeburg.”

Chen said practicing Falun Dafa improved his moral standards. He said, “Before I began practicing, I always thought about how I could take advantage of others. I had a hot temper, so I was always ready to fight. I was also addicted to smoking and drinking.”

Practicing Falun Dafa helped him stop smoking and drinking. He became kind and had fewer arguments with his wife. His temper improved. Now the they get along well and seldom argue.

Foreign language students have to pass a German language requirement. “From taking German language classes to preparing for graduation, it was not easy. There were many difficulties. But I followed Master’s teaching that students must study well. I did not stop practicing even when things got difficult.

“I graduated and got a high score of 1.7 (Outstanding. The best score is 0 and the lowest is 6 in Germany). It was not easy. My wife also graduated without a problem. We both got good jobs.”

At work, Chen follows the requirements for a practitioner and completes his assignments on time. He never competes or fights for promotions.

His son was born in 2004. “We educate him by following Dafa's principles of Truthfulness-Compassion-Forbearance. We talk to him so that he can understand and follow them. He excels in all areas at school. He is talented in both his academics and music. He plays the trumpet and won first place in a competition for his age group in Baden-Württemberg.

“Watching our son grow up under Dafa's guidance, we really appreciate Master,” Chen said. “We have lived in Germany for over 20 years. Many of our friends have a hard time educating their children. Children usually follow society's downward trend. Modern technology and electronics are all degrading society and children's morals.”

Chen’s wife was 44 years old when their daughter was born. Pregnancy and delivery are usually a challenge for women that age. Chen said, “Our daughter's easy birth was Master’s blessing.”

Recalling his cultivation path, Chen said, “Over the past 21 years, Master cleansed me and eliminated my karma. I am fortunate to be a Falun Dafa practitioner during the Fa-rectification.

“There are no words to express my gratitude to Master. At this final stage of Fa-rectification, I will study the Fa well, cultivate diligently, do better in clarifying the truth, and fulfill my prehistoric vows. I often remind myself to save more people and follow Master to return to my true home.”

“What’s the Right Solution for the Pandemic?”