Greece: Falun Dafa Practitioners Express Their Heartfelt Thanks to Master 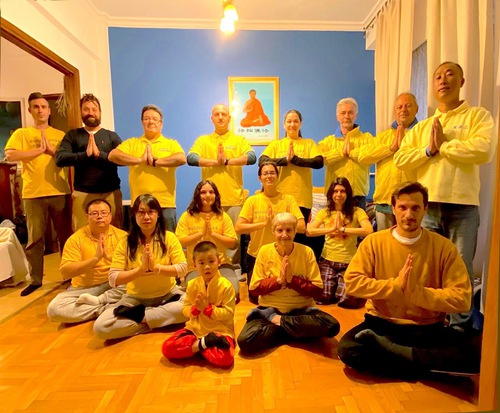 They shared their experiences about how they've improved mentally and physically after they started to cultivate.

Becoming Kind and Tolerant after Abiding by Dafa's Principles 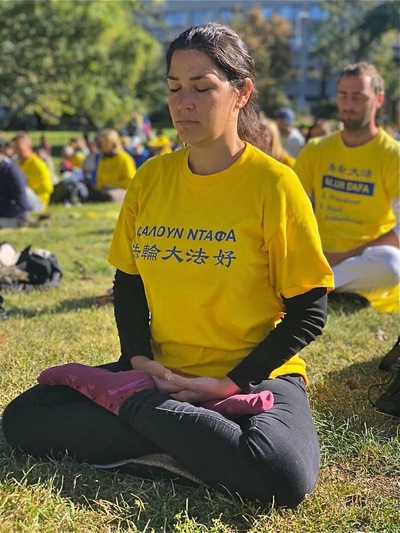 Neli from Athens and her husband George both began practicing Falun Dafa 17 years ago. Neli was searching for something profound since she was 14 years old. She read many books about philosophy and supernatural phenomenon and she even learned martial arts. In 2003, her martial arts instructor demonstrated some of the Falun Dafa exercise movements. Although she had not yet started practicing, she could feel energy and something spinning.

In 2004, when Neli read the book that her instructor recommended, Zhuan Falun, she knew Falun Dafa was what she had been searching for. After reading it, Neli began to follow the guiding principles of Falun Dafa—Truthfulness, Compassion, and Forbearance—in her daily life.

When she began to practice, Neli was still a teenager and liked heavy metal music and movies about combat. Influenced by this violence and the negative trends in society, Neli easily lost her temper and was impatient. She was always ready for a fight—she even dreamed she fought with others in her sleep.

After she began to practice Falun Dafa, Neli learned how to consider others' feelings. She listened and gradually became kind and tolerant. She said, “My mother noticed this and kept saying that she was very happy that I was introduced to Falun Dafa because Dafa saved my life!” Neli's taste in music also changed and she started to like classical music. She said, “No words can describe the gratitude I have for Master for saving me.” 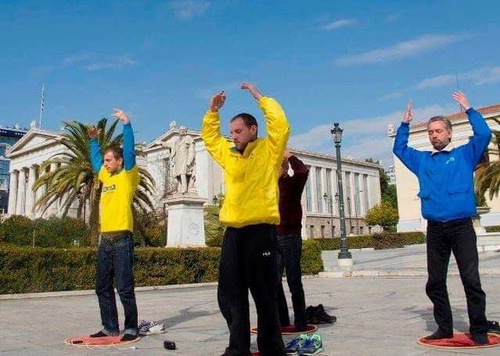 George, who has always been interested in Chinese culture, attended the same martial arts school as Neli. After learning two kinds of martial arts and a qigong practice, George felt frustrated. He wanted to find a practice that cultivated one's inner self. In 2004, at the instructor's recommendation, George found Falun Dafa. After reading Zhuan Falun he understood what it means to be a good person. He started to abide by the Dafa's principles of Truthfulness, Compassion, and Forbearance. After he started cultivating, George no longer wasted time or pursued bad habits. His relationships with his family and friends improved and he no longer got sick.

Because they shared the same spiritual belief, George and Neli often read the Falun Dafa teachings, did the exercises, and discussed their cultivation experiences together. As time passed, they gradually learned more about each other. They married and began cultivating diligently together. They witnessed each other's growth. George said, “Practicing Truthfulness, Compassion, and Forbearance is the best thing a person can do for oneself and one's family.”

The Most Fortunate People in The World 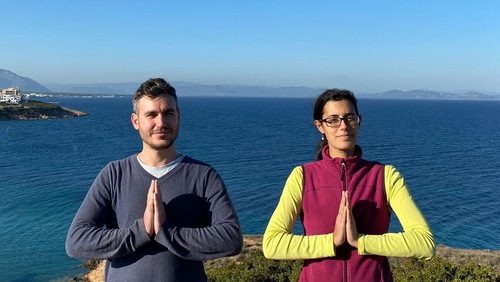 Natalia and Zafeiris from Athens met after they began practicing Falun Dafa.

In 2010, Natalia's friend recommended that she try Falun Dafa. She noticed that the graceful movements were simple but meaningful. The first time Natalia did the exercises she felt very light and happy. She was determined to cultivate diligently.

Natalia used to suffer from anemia. Even though she took iron supplements, she still had dizzy spells that were so bad her vision was affected. Some days she even had trouble getting out of bed. After she began to practice Falun Dafa, Natalia's anemia disappeared and she stopped taking iron supplements. She also quit smoking and drinking. She was determined to adhere to Dafa's principles and become a truly good person.

“When a person's character improves, his health improves,” Natalia said. “The true purpose of life is self-cultivation. Letting my ego run wild was the reason why I was unhappy and had hardships in the past.”

Zafeiris started playing the piano when he was 5 years old. He appreciates classical music and takes his studies seriously. After he graduated from high school, he went along with his friends and started smoking and drinking. He also stopped playing the piano. He listened to rock music and played the electric guitar. As time passed, he became increasingly unhappy. He felt that he was getting further and further away from his true self. In his heart, he hoped for a way to change.

In 2012, 25-year-old Zaifeiris was riding his bike through the streets when he met Natalia, who gave him a Falun Dafa brochure. Zaifeiris was interested in Asian culture, so he was intrigued. He decided to learn the exercises and started reading Falun Dafa's main book Zhuan Falun. He soon distanced himself from modern music and the bad habits he indulged in. His life became better and meaningful.

Through Natalia, Zaifeiris learned that people throughout the world practice Falun Dafa—except for China, where practitioners have been persecuted by the CCP since 1999. However, the media in Greece did not seem to cover these human rights violations. Natalia and Zaifeiris thought this was strange, so they started to contact Greece's independent newspapers and published many articles about the persecution in China. Natalia, Zaifeiris, and other practitioners now run an independent news media in Greece, the Greek language version of the Epoch Times. This newspaper allows millions of Greek people access to true world news.

Natalia and Zaiferis expressed their heartfelt gratitude to Master and said, “We feel fortunate to have the opportunity to practice Falun Dafa and find our true purpose in life!”