(Minghui.org) Today's news from China includes incidents of persecution that took place in 22 cities or counties in 12 provinces, where at least 32 practitioners were recently persecuted for their belief. 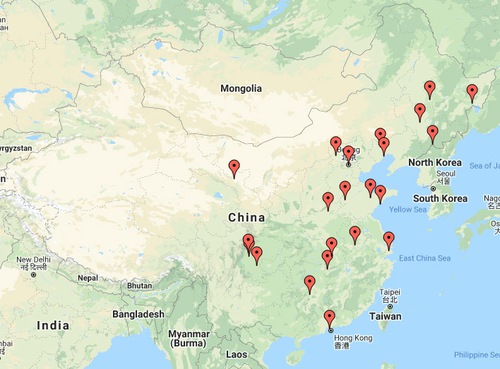 Ms. Yao Guizhen was sentenced to four years and three months in prison and fined 20,000 yuan.

The Jing’an District Intermediate Court upheld her original verdict on November 29, 2020. It is not clear whether she is in the Baoshan Detention Center or in prison.

Ms. Shan Shujiang from the Shunyi District was harassed by four or five officers from the Liqiao Town Police Station and village women’s association staff members on January 7, 2021. They had just finished searching her bedroom and took pictures of Zhuan Falun on the table.

Ms. Shan wasn taken to the police station and then to Shunyi Hospital for nucleic acid testing. Four or five officers ransacked her home again that afternoon and confiscated Falun Dafa books and keepsakes. Ms. Shan was released at noon on January 8.

Ms. Li Jinghua was arrested by division head Shen Youfa of the Domestic Security Division in October 2020. Her current whereabouts are unknown.

Feng Xianlong and other officers from the Erdao Domestic Security Division arrested 74-year-old Ms. Zhao Shanying on November 26, 2020. She is still being held in the disease monitoring ward set up by the police department in Changchun Hospital.

During that time, Ms. Zhao’s son Mr. Zhu Xiaoguang went to the Rongguang Road Police Station to demand her release several times but was not successful. He learned that his mother’s case had been turned over the Erdao Procuratorate.

Ms. Yang was taken to the Changchun City No. 4 Detention Center. Her case was turned over to the Chaoyang Procuratorate.

Mr. Liu Erwa, in his 40s, from the Dongxing District was arrested at his own shop on December 20, 2020, for distributing Falun Gong materials.

Ms. Chen Dechun from the Changqing Company was arrested by the Pengzhou City police on January 19, 2021.

Ms. Zeng Bifang, 67, was arrested by Sanjie Town Police Station officers on December 28, 2020. They took her to the Pengzhou Traditional Chinese Medicine Hospital for a physical exam and then to the police department to interrogate her. She was forced to sit in an iron chair and had a sample of her blood taken against her will.

She was held in the detention center for six days.

When Ms. Wu Yuedi put Falun Gong materials in the basket of an electric car on January 9, 2021, the owner saw her and reported her to the police. She was arrested by Wanghu Police Station officers who then ransacked her home and confiscated photos of the founder of Falun Gong and printed materials. The police came to harass her again over the next few days. She could not return home and was displaced.

Ms. Li Shuxiang from the Weicheng District was arrested by plainclothes officers from the Beiguan Police Station for talking to people about Falun Gong at the intersection of Xiangyang Road and Beigong Street on January 11, 2021.

The police took her for a physical exam on January 12 and made her eldest daughter pay 1,200 yuan for it. They ransacked her home that afternoon and confiscated all her Falun Dafa books and 500 yuan in paper bills with Falun Gong information printed on them. She was taken to the Changyi Detention Center.

Ms. Sun Xiu’e, Ms. Li Guihua, Mr. Chen Jun, and other practitioners were harassed over the phone by officers of the Liaocheng Railway Station Police Station on January 12, 2021. The officers convinced them to come to the police station to pick up security deposits on January 13. Ms. Sun and Ms. Li were taken into custody when they did.

Zhou Shengqiao and other officers from the Dongchangfu District Domestic Security Division harassed Mr. Chen Jun and Lu Fengyun (gender unknown) in the Pipeline Bureau family quarters on the morning of January 13.

Officers from the Yunshan Town Police Station in Pingdu City went to Shanwang Village and ransacked Ms. Li Meijun’s home on the morning of January 19, 2021. They confiscated a printer, Falun Dafa books, and printed materials.

Then they went to Diaoyutai Village and ransacked Ms. Wang Zhongfang’s home. Her son’s home was also ransacked.

Ms. Teng Wenzhi was arrested by Shangjing Police Station officers on the afternoon of December 26, 2020. She was transferred from the police station to the Longgang Detention Center on January 1, 2021.

On January 5, Ms. Teng’s family hired a lawyer to make an appointment for the first time to meet with her on January 11. The detention center canceled the meeting due to a conflict with interrogation schedules. On January 15, the lawyer made another appointment to meet with Ms. Teng, but the detention center refused on the grounds that the lawyer's documents did not meet the requirements.

They also ransacked the home and confiscated photos of the founder of Falun Gong and about 18 Falun Dafa books.

Ms. Zhang Cuiyun’s home was ransacked by Hongqi District Police Department officers at the end of December 2020. Her computer was confiscated.

Ms. Lei Shengli’s pension has been suspended since November 2019. Her pension in 2019 was over 3,800 yuan per month. Based on calculations by the country retirement bureau, Ms. Lei had to return 207,460.69 yuan. Her family borrowed from everyone they could think of and returned 138,243 yuan.

Ms. Lei was sentenced to three years in prison (April 2012 to April 2015) for practicing Falun Gong.

Ms. Tong Li, 43, and Ms. Li Yanxia, 67, from the Hanyang District were arrested for talking to people about Falun Gong on Chuhehan Street, Zhongbei Road in the Wuchang District, on January 1, 2021. They were released at 12 a.m. that night.

On January 12, both of them disappeared and their current whereabouts are unknown.

According to instructions from the district 610 Office, the Human Resources and Social Security Bureau has withheld her pension since September 2018.

She was held in a forced labor camp for two years and spent five years in prison before 2018. Her pension paid to her during those years has also been deducted, totaling over 300,000 yuan.

Ms. Xiao brought charges against the Lingling District Human Resources and Social Security Bureau at the Dao County Court in August 2020 for illegally suspending her pension.

The Dao County Court ruled that the Lingling District Human Resources and Social Security Bureau should pay Ms. Xiao except for the one year she was in prison (from April 2017 to April 2018).

Over ten officers from the Xiangyang Police Department and the Xidayingzi Police Station in the Longcheng District broke into Mr. Tian Guoyou’s home and ransacked it on the morning of January 19, 2021. They confiscated a computer, a printer, and tens of thousands of yuan in cash.

The police wanted to take Mr. Tian’s wife away. His wife was watching their two grandchildren. The police went to where their daughter-in-law worked and ordered her to go home to watch the children.

Someone with the Gongren Residential Community in Suizhong County called Ms. Huang Lihua’s daughter on January 18, 2021. The daughter was pressured to sign three statements on behalf of her mother, but she refused to. She was told to “transform” her mother, which she also refused to do. The caller planned to show up in person.

Officer Wang Liang from the Hexing Road Police Station called Mr. Han’s wife on January 14, 2021, and told her that community staff members would come to her home to take pictures.

Party secretary Han Xianji of Mishan Town talked to Mr. Zhang Yutang and pressured him to write a guarantee statement on December 11, 2020.

On the afternoon of December 17, seven police officers knocked on Mr. Zhang’s door several times, but he did not open up.

Cao Hai, head of the Armed Forces Department of Mishan Town, and six or seven officers from the No. 4 Police Station harassed Mr. Zhang at home at around 9:30 p.m. on December 18.

Mr. Zhang Chuanfu was arrested after work by officers from the No. 4 Police Station in front of his home on December 21. They confiscated Falun Dafa books, two cell phones, two small speakers, and over 2,000 yuan in cash.

They took Mr. Zhang to the police station for interrogation. Mr. Zhang was later taken to the Mishan Detention Center and held for 10 days.

During that time, Cao Hai and others went to the home of Mr. Zhang’s daughter and harassed her several times. They asked her to sign her parents’ names on three statements, but she refused to.

Mr. Zhang’s son-in-law later agreed to sign the statements and they stopped harassing the family. That round of harassment cost Mr. Zhang’s family almost 3,000 yuan.

The police station called her on January 18 and 19, ordering her to come to the station to get her information. They threatened to go to her home if she did not.

“Another Encounter with a Plague God”

“Woman in Her 70s Detained for Two Weeks and Counting, Faces Prosecution for Her Faith”