(Minghui.org) New Zealand’s National Day was February 6, 2021. The celebration event organizers invited Falun Dafa practitioners' Tian Guo Marching Band and the Waist Drum Team to participate in the grand Waitangi celebration and perform on the main stage. Their performances were greatly welcomed by everyone.

The Tian Guo Marching Band performed songs such as ‘Falun Dafa is Good,’ ‘The Sacred Song,’ ‘Triumphant Return,’ while the Waist Drum Team performed dances such as ‘New China March,’ ‘Quit the CCP to Attain Safety and Peace,’ ‘Falun Dafa is Good,’. Before their performances, the emcee introduced Falun Dafa’s exercises and principles. He also explained that practitioners have been persecuted by the CCP (Chinese Communist Party) for more than 21 years.

In February 6, 1840, England and the Maori chiefs signed the Waitangi Treaty. This treaty resolved tribal conflicts and laid the foundation for New Zealand to become an English colony. Since 1974, February 6 has been celebrated as New Zealand’s National Day. The grand event is held on the spot where the treaty was signed 281 years ago at Paihia, a popular tourist destination in New Zealand's northern island.

At 5 a.m. on February 6 the day started off with a flag-raising ceremony which was attended by the Prime Minister, cabinet members and the Maori tribal chief.

Although fewer tourists attended this year's celebrations due to the CCP virus (coronavirus) pandemic, New Zealand residents from around the country crowded the Paihia town and Waitangi Cape. Hotels for miles around were fully booked. 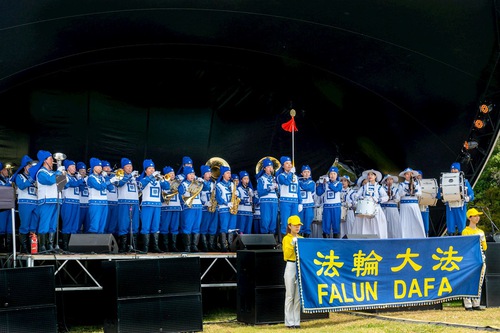 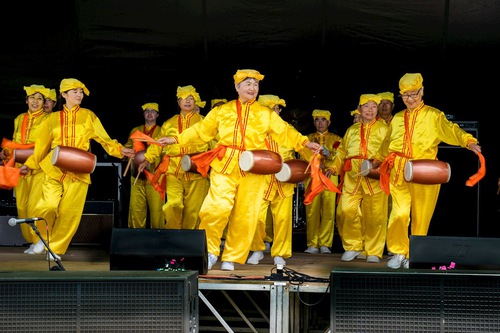 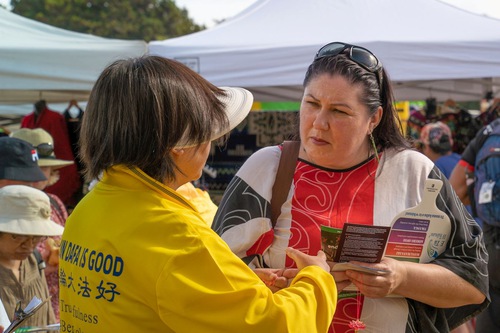 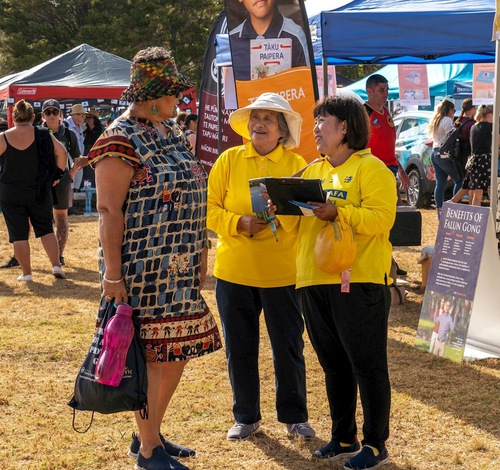 Practitioners tell people about Falun Dafa and the persecution.

Former Company Director: Truthfulness, Compassion and Forbearance are What We Should All Pursue 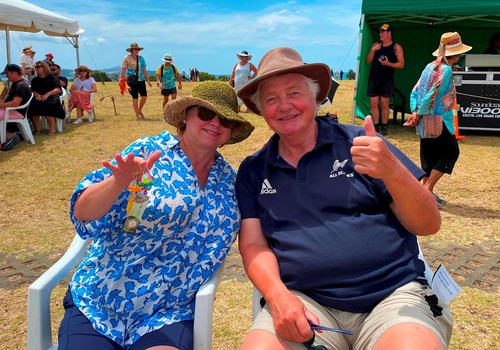 Ray Watkins was the director of a New Zealand company but retired last year. His company set up a processing plant in China more than 20 years ago, so he's visited many cities throughout China. He and his wife loved the Tian Guo Marching Band and the Waist Drum Team's performances. He was surprised that the Tian Guo Marching Band members ranged from 8 years old to over 70 years old. They also liked the Waist Drum Team’s bright and colorful attire and their graceful dance movements.

They were even more appreciative of Falun Dafa's principles of Truthfulness, Compassion and Forbearance.

Mr. Watkins said, “Falun Dafa's principles of Truthfulness, Compassion and Forbearance should be pursued by everyone. That would not only make life beautiful, but it would get rid of hatred, depression, other negative matters and those things that make life unhealthy and fragile. This is the truth that we should all pursue.”

Mr. Watkins said that many years ago he saw people practicing the Falun Dafa exercises and meditating in a park in Beijing. He could not understand why the CCP wanted to persecute them. He said, “All of what's done by the CCP is just to control people. This is very shameful! People should have the freedom to choose their lifestyle which makes them happy. However, the CCP and the Russian Communist Party are the same. They suppress religious groups and do not let people have the freedom to choose their beliefs. They make their citizens be totally loyal to the political party. The Party spirit is the most important thing to them. Stalin killed nearly ten million people during the 1920s. Communism is a very bad political system which is used to oppress and exploit people and deprive their rights so as to control everything.”

Mr. Watkins even said, “Now the CCP is promoting the ‘One Belt One Road’ initiative to construct public roads in many pacific countries. However, many local people did not like it as what the CCP wants is a high level of investment returns and they also make local governments agree to the tax-free condition to let the CCP’s businesses enter their country. Due to the tax-free system, the CCP’s businesses are able to bring down their product prices greatly and cause the local industries to close down. This makes local people very angry.”

Ray Watkins is worried that the CCP’s influence on the world's economy will become a political influence. He hopes that western democratic countries can form an alliance to help developing countries and bring democracy to them.

“The CCP Has 100% Characteristics of a Devil” 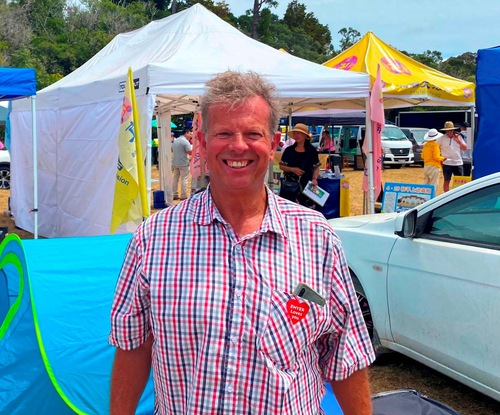 Philip Davies thinks that calling the CCP a devil is correct.

Philip Davies used to work at a China-based New Zealand insurance company. Talking about his experiences while working in China and Hong Kong, Mr. Philip Davies said, “The insurance company was aligned according to the CCP’s government system from top to bottom. People rose in rank based on their loyalty to the CCP. The more loyal you are to the Party, the higher in rank you climb. I observed the CCP can become very ferocious at any time. At first it seems to be friendly and kind but once it has decided that you are its enemy it immediately treats you cruelly and mercilessly, just like how it treats the Uighurs and the Falun Dafa practitioners.

“The most evil part is it will totally deprive you of your human rights as it no longer thinks that you are human. That is the cruelest. To the CCP, you no longer exist. This is the behavior of a devil. Thus, calling it a ‘devil’ is very accurate. The CCP is this evil. Its level of cruelty is the same as the Nazis.”

Mr. Davies thinks that, “New Zealand and other western countries have their own traditional values. When we trade with the CCP, we should think it through properly and not lower our standards of virtues. This form of compromise is very scary. When we compromise too much, we will ultimately be eroded by the CCP. The situation has reached a very critical time now. We do not want to wait until the CCP’s economy and military powers expand to a certain level. If we wait until that happens, it will be too late.”

Mr. Davis said that he read a Falun Dafa brochure many years ago. “Every time I see practitioners protesting in front of the Chinese embassy, I always salute them. I feel that Falun Dafa’s principles are very good, and I am very supportive. ‘Truthfulness’ is so important in this current society. Nowadays, many media are being controlled by a small group of people. They mislead people. They even lie and cleverly mix the lies in with the truth.

Mr. Davies continued, “For example the news reported in a newspaper can be 95% true but 5% of it are lies that are mixed in for a motive. This way, people will think that everything that the newspaper reports is true. Some of this fake news is being mixed in for political reasons. ‘Compassion’ is the thing that we need the most as compassion is love, sincerity, hope, happiness and peace. But for the CCP, it is evil, greed, jealousy, deceiving, hatred and cruelty. The CCP has 100% of the characteristics of a devil.”

Hotel Manager: We Must Persist in Our Values and Find Our True Selves 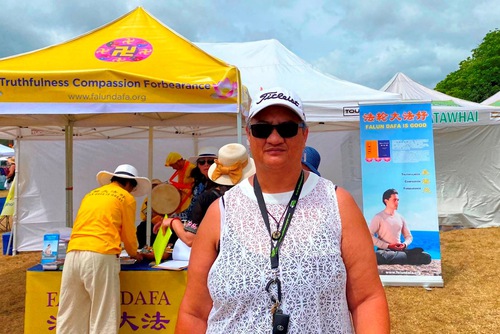 Max Cooper is a hotel manager. She said that she is very interested in Falun Dafa. She said, “I like to meditate. We Maoris have very similar principles. We believe very much in things like energy, spirit and soul. This is the most essential thing that God gave to people. We are just expressing it in different languages and practices. We Maoris really advocate things of the spiritual level and we pray to the creator. This is not a religion and it is also not something that belongs to the human body or mind. It exists in another time and space.”

Ms. Cooper also said, “I feel that the Falun Dafa practice can link up the energy of one’s spirits with one’s body and thus bring forth positive energy to get rid of negativity. We Maoris also talk about ‘Truthfulness’. ‘Truthfulness’ is a true belief in the creator. A person is like a cup. If a cup is full of clean water, there will be no space to hold dirty water. We must also educate our children to not be lured by this materialistic world. We must tell them to persist in their own values and we must return back to our true selves, back to our initial pure souls.”