(Minghui.org) Today's news from China includes incidents of persecution that took place in 14 cities or counties in 8 provinces, where at least 16 practitioners were recently persecuted for their belief. 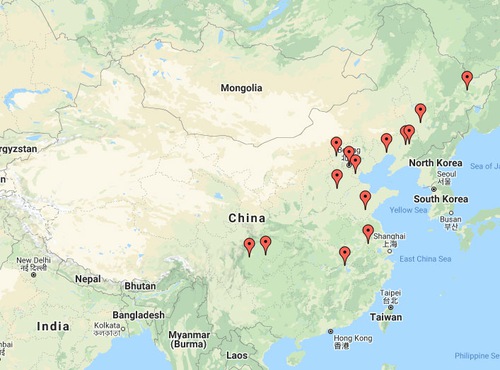 Ms. Li Ping from the Chaisang District was taken away when she went to pick up her son in an elementary school on the afternoon of November 2021. Her home was ransacked the next day. Her Falun Gong books, about 7000 or 8000 yuan in paper bills imprinted with Falun Gong facts, and other personal belongings were confiscated. Ms. Li was detained in the Chaisang District Detention Center for more than 20 days.

Ms. Yao Xiulan from Dadong District, 68, was arrested on the afternoon of July 10, 2019. She was first detained in the Shenyang Detention Center and was later sentenced to two years in prison. She was force fed while detained and lost almost all of her teeth. She was released on July 9, 2021. Her pension was suspended after she returned home.

Ms. Meng Xiangling from Mamuchi Township was taken away by staff members from the urban management department at a market on December 17, 2021. She was released that evening. The next day, local police officers went to her home and pressured her to sign a guarantee statement, which she refused.

Ms. Chen Xiumei lives in Lidu Town, Jialing District, Nanchong City. Li Hong, mayor of Lidu Town, and Teng Xingfu from the local neighborhood committee, went to her home to harass her twice late at night, once in July and once in September 2021. They took pictures of her home.

Ms. Chen received several harassing phone calls from the local Political and Legal Affairs Committee on October 12, 2021 after they learned that Ms. Chen’s daughter and her son-in-law were visiting her. Ms. Chen was pressured to sign the three statements, which she refused.

Around 9 a.m. on October 13, 2021, Li Hong and three officers from the Hantang Police Station went to Ms. Chen’s home. They ransacked her home and confiscated her personal belongings including five Zhuan Falun (three of them were hand-copied), an entire set of Falun Gong books, a photo of Falun Gong’s founder, a recent article, a niche, a lotus painting on the wall, a couplet on the door, a laptop, a MP5 player, two MP3 players, a stereo player, two smart cell phones, 16 amulets, and other items. Ms. Chen was taken to the police station for interrogation and was released later that day.

Twelve people including Feng Ziyang from the Domestic Security Division, Lin Hong, mayor of Lidu Town, and the police officers, went to Ms. Chen’s home around noon on November 2, 2021. They ransacked her home again and confiscated several Minghui calendars.

Two people from the Domestic Security Division went to Ms. Chen’s home on November 19, 2021. They asked Ms. Chen to sign the list of items taken from her home. She refused.

Ms. Gu Yuzhi has been harassed repeatedly by police and local government officials since 2020.

Hu Chunlin and other officers from the Pudong Police Station in Beichen District went to Ms. Gu’s home several times in April and May 2021. They videotaped her and her home and demanded she hand over anything related to Falun Gong.

Police officer Hu Chunlin and Huang Chunmei, director of the local neighborhood committee, went to Ms. Gu’s home twice on November 4, 2021 with the excuse that they needed to check the house registration. They pressured Ms. Gu to cooperate and they videotaped her.

Ms. Gu’s older sister was phoned by the local neighborhood committee on December 19, 30 and 31 respectively. She was pressured to cooperate with them. Afterwards she was unable to sleep and her blood pressure rose. She felt dizzy and was unable to get out of bed.

Officer Hu Cunlin and another officer Wen to Ms. Gu’s home around 8 p.m. on January 14, 2021. They pressured her to sign and be recorded signing.

Ms. Gu’s son was threatened by the district Political and Legal Affairs Committee on February 5, 2021. He was told that his mother would be arrested if she still refused to cooperate.

Ms. Xia Ruimin was arrested at home on the afternoon of December 14, 2021. She is currently detained in the Miyun District Detention Center.

Mr. Yu Heng in his 40s was at his workplace when more than 20 police officers went to his home around 9 a.m. on October 12, 2021. The police did not leave his home until 6 p.m. that evening. His personal belongings were confiscated including four computers, a photo of Falun Gong’s founder, twelve cell phones, and other items. Mr. Yu’s mother, his uncle and aunt were taken to the Chunxi Police Station. Mr. Yu was taken to the police station from his workplace. The three elderly people were released later that day. Mr. Yu is still held in the Chunxi Detention Center.

Three officers from the Sizhilan Town Police Station went to Mr. Wang Mengjiu’s home in Nanqizhuang Village on the afternoon of November 30, 2021. They forcefully took samples of Mr. Wang’s blood.

Ms. Wang Shuyun was tricked into going to the Railway Police Station on December 16, 2021 and was arrested. She was taken to the Nangou Detention Center and placed in a 10-day detention.

Ms. Guo Shufen is held in the Jinzhou Women’s Detention Center. She is in poor condition. Her blood pressure is high at 180 and she suffers from heart disease.

Ms. Tian Guiying was arrested by officers from the Jianshe Square Police Station in the Chaoyang District on December 4, 2021.

Ms. Li Manying and Ms. Lang Dongyue from Huailai County were arrested by officers from the Shachengnan Police Station at their rental apartment around 6 p.m. on December 14, 2021. The police ransacked the place and confiscated ten printers, two laptops and 50 boxes of printing paper. Ms. Li and Ms. Lang were placed in 15-day detention.

Ms. Qi received a call in December 2021 and was told to stop by the police station. She was detained when she arrived, and was detained five days.

Twelve people from the Xinfan Town Police Station, the town government office, and the town 610 Office, went to Ms. Zhou Cui’s home on December 14, 2021. They searched everywhere and confiscated two Falun Gong books and a media player. They tried to take her to have a physical exam, which she refused. Two officers forcefully made her press her fingerprint on the three statements. Ms. Zhou was taken to the local community office to watch the video of the “Tiananmen Self-immolation.”

“My Cultivation Experience in Truth Clarification”