(Minghui.org) Yilan County Council in Taiwan passed a cross-party motion on December 24 to support the Universal Declaration on Combating and Preventing Forced Organ Harvesting (UDCPFOH). The motion condemns the organ harvesting by the Chinese Communist Party (CCP) and urges the Taiwan government to implement laws to help end the atrocity. 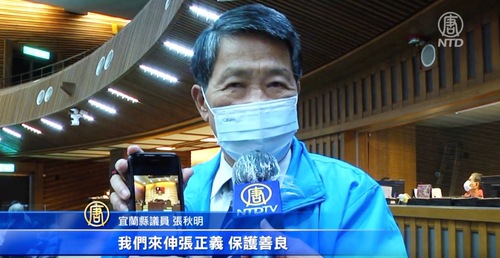 Chang Chiu-ming, a member of Yilan County Council, said a motion was passed on December 24 against organ harvesting.

When the 76th United Nations General Assembly took place in New York in September 2021, five nongovernmental organizations from the US, Europe, and Asia issued UDCPFOH on September 26, the last day of the World Summit on Combating and Preventing Forced Organ Harvesting.

UDCPFOH has been supported by parliament members, government officials, and leaders from many countries. They include Changrok Soh, member of UN Human Rights Council, and Thierry Valle, director of European Federation for Freedom of Belief. It was also endorsed by Arthur Caplan, professor of bioethics at New York University and the founding director of the Medical Ethics Division.

The Taiwan Falun Gong Human Rights Working Group has since contacted the central government as well as county-level governments in Taiwan, urging them to support this initiative. The Group believes that by raising awareness to the general public and taking further actions, leaders from around the world can stop the CCP’s organ harvesting through joint efforts.

During an ad hoc session held by Yilan County Council on December 24, the motion was initiated by three council members including Zhang Chiu-ming, Chen Han-chung, and Tsai Chin-hui. To fulfill its human rights commitment, the motion aims to support the UDCPFOH, condemn the organ harvesting atrocity by the CCP, and institute related criminal legislation. For specific implementation of this resolution, the council requests the county government to contact relevant agencies of the Taiwan Executive Yuan. With 25 cosponsors, including Wu Hong-mo and Yang Tree, this motion was passed in the council.

Chang said he was happy to see Yilan Council supporting the upright with this motion. Yang pointed out the CCP’s brutality of organ harvesting is anti-humanity and it is a disgrace to mankind. He hopes such efforts will stop the atrocity and promote kindness as well as traditional values in society.

“Finally Finding My Fundamental Attachments after Cultivating for Two Decades”