(Minghui.org) Since 2011, practitioners in Batam, one of the largest Indonesian cities, have been introducing Falun Dafa to secondary schools and colleges. Over 10,000 students, teachers, and parents have learned the practice and praised practitioners’ efforts.

Falun Dafa is well received on campuses in Batam, the largest city in the province of Riau Islands, Indonesia. 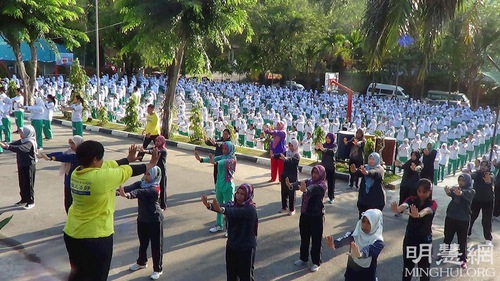 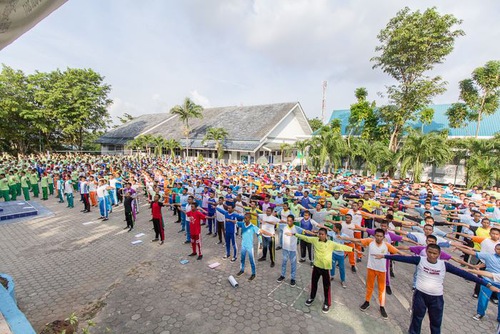 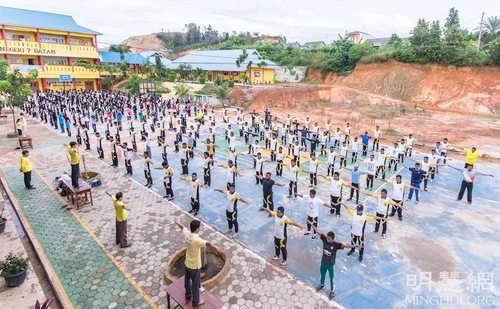 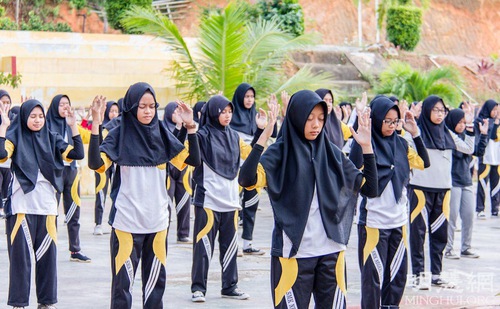 Besides teaching the exercises, practitioners also talked about the ongoing persecution in China. They tell students and teachers that many practitioners are detained and tortured for their belief in the principles of Truthfulness-Compassion-Forbearance. Some even became victims of organ harvesting. Many students and teachers signed petitions calling to end these egregious human rights violations.

Mr. Chen Jisong, one of the coordinators, said each school has a large number of students every year, ranging from hundreds to about 1,000. Through the efforts of other practitioners and himself, about 10,000 students and teachers have been introduced to the practice in the last 10 years.

“It started with some initial successes. After pictures and videos of large-scale exercise teachings spread through social media, principals from a number of schools called inviting us to come and teach the exercises. As more schools heard about this, additional invitations came and sometimes it was difficult to accommodate all of them,” Mr. Chen said.

“Falun Dafa is very powerful. With over 800 students, it was hard to tell them to do something yet all of them did simultaneously,” explained one principal. Some students noticed the difference. “Unlike other music, the Falun Dafa music is peaceful and soothing,” one student said. “Doing the exercises makes one relaxed but energetic.” Teachers and principals also had similar impressions, and some recommended the practice to their family.

During the workshops practitioners shared their own stories, explaining how the practice improved their physical health and character. Mr. Mujiono, principal of SMK Kartini Batam, said he observed this. For example, students were less stressed. With a better emotional stability, they were easily able to handle both classwork and daily life. 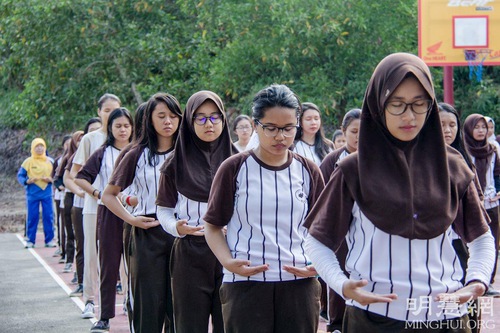 This highlighted the importance of these workshops. Due to negative propaganda from the Chinese Communist Party (CCP) in the past, Mr. Mujiono and some teachers did not know what Falun Dafa really was. Social media and conversations with practitioners helped them decide to invite Falun Gong to the campus.

As leader of the school management team, Mr. Mujiono knows the challenges he faces to establish an upward spirit for the school, which is important for the students for the long term. That is why he was happy to see how Falun Dafa changed the school for the better.

Similar responses were seen throughout schools these few years. When a joint workshop was held for junior high and high schools in Fajar Plus of Depok and on June 5, 2011, more than 300 students and teachers participated. School principal Mr. Hadi, said his wife saw a Falun Dafa event in Batam. After reading Zhuan Falun and getting to know the principles of Truthfulness-Compassion-Forbearance, she decided to recommend this to the school so that the students would have healthy minds along with healthy bodies.

Some schools invited practitioners to come more than once to teach the exercises. For example, SMK Aljabar, a vocational high school, had two workshops in 2015, one on September 12 and another on October 17. Both students and teachers alike said they felt strong energy when they learned the exercises. 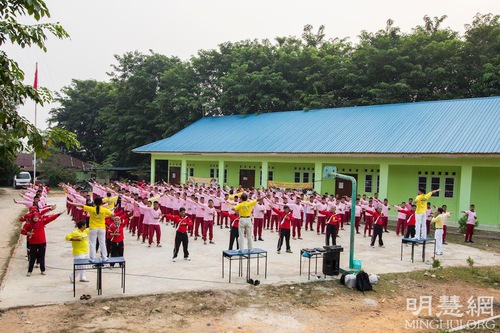 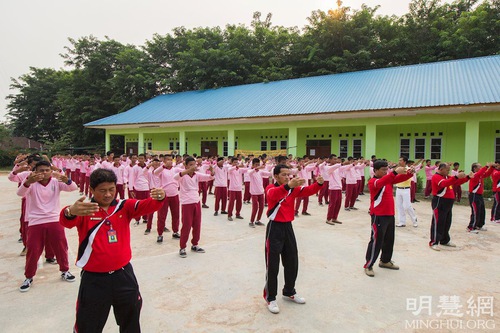 Teachers and students from SMK Aljabar learned the exercises during workshops held on September 12 and October 17, 2015.

The principal gave a speech after the two workshops and thanked practitioners. He said he felt refreshed and energetic after doing the exercises. “The music is peaceful and beautiful,” he said.

Having tried the exercises himself, the principal said the practice would help one stay fit while elevating moral values. That is why he recommends Falun Dafa to others.

In addition to students, teachers also benefited tremendously from the practice. One 41-year-old computer teacher just had an accident and hurt her lower back. Because she just underwent surgery she was still in a wheelchair. Nonetheless, she was able to learn all five sets of exercises. “My entire body felt warm,” she explained, “And there was energy circulating in my body including the area where I had surgery.”

Another teacher, 52, taught religion and was impressed by the exercises. He pointed out the importance of spiritual guidance offered by Falun Dafa. Another teacher 53, had lower back pain, digestive disorder, and difficulty breathing. After doing the exercises, he found all these areas improved – he could breathe with ease and his low back pain was reduced.

One employee at the school administration office emphasized the inner peace she experienced. She said the music was peaceful and it helped her calm down.

Two sophomore college students agreed. They said the music was beautiful and the practice was inspiring.

Principal of Renowned School: I Never Felt So Good 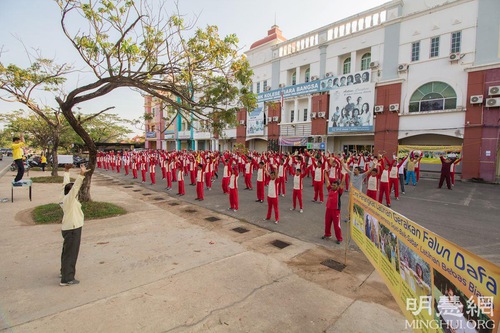 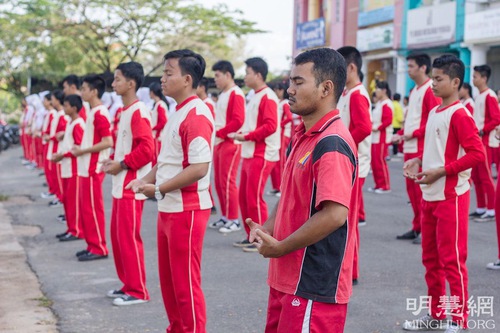 When 150 students and teachers from the renowned SMK Kolese Tiara Bangsa learned the Falun Dafa exercises on April 29, 2016, many said they liked the movements very much. As a result, they invited practitioners again for a second workshop on June 11, 2016.

The school principal said he had a little dizziness when doing the second  exercise for the first time. But afterwards, he relaxed and said he never felt so good in his life. The vice principal agreed. In the beginning, it was a little difficult due to stiffness in his shoulder. But after the practice, he felt very comfortable and could focus on his work.

Other teachers and students said they also noticed additional benefits. Ronald, a 35-year-old computer teacher, said his entire body became light with energy circulating in his abdominal area. Plus, he found himself having a clearer mind at work.

Anisma, 29-year-old accountant said she was, “Able to concentrate at work, with more concentration, patience and wisdom. I will definitely learn more about this practice,” she added.

Feedback from the students is also very positive. Rahmasarita, 16, is in the 11th grade and majoring in accounting. She said the music helped her calm down. Another 11th grader, Sara who is majoring in office management said she joined the group exercises with practitioners a few times. “It seems Falun Dafa has given me wisdom, making me kinder and willing to help others.” Her friend Lawrence noticed that. She was happy Falun Dafa could bring people peace and happiness.

After the group exercises, practitioners describe how the practice has been persecuted by the CCP in China since July 1999. Not only were practitioners detained and tortured, CCP officials also killed them and sold their organs for profit. Many students and teachers signed petitions urging to stop the brutality. 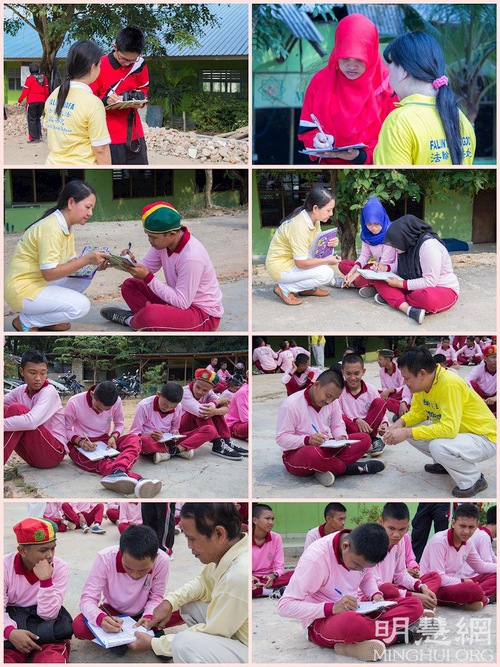 Signature drive at SMK Aljabar in 2015 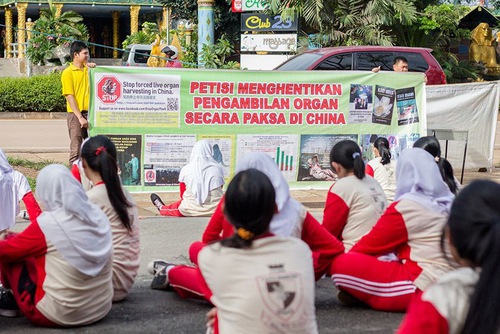 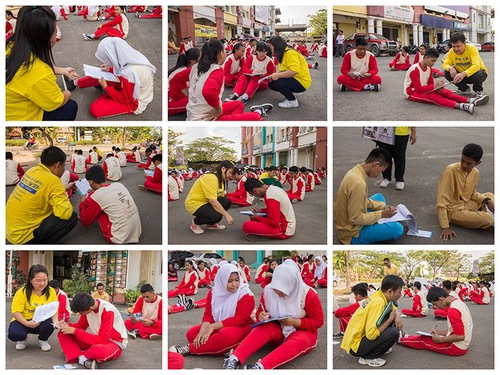