(Minghui.org) A rally was held at the entrance of Human Rights Street (Strabe der Menschenretche) in Nuremberg to protest the Chinese Communist Party’s (CCP) persecution of human rights on December 10, Human Rights Day. Two Members of Parliament (MP) sent a video and letter to support the event and condemn the CCP’s organ harvesting from Falun Gong practitioners.

Known as Germany’s human rights city, the Nuremberg Trials were held in the Palace of Justice (German Justizpalast). After World War II, Nazi war criminals were prosecuted and tried in accordance with international law. In 1988, twenty-nine white columns were erected on Kartäusergasse street. Each column was engraved with a United Nations Declaration of Human Rights in German and another language, forming Human Rights Street. 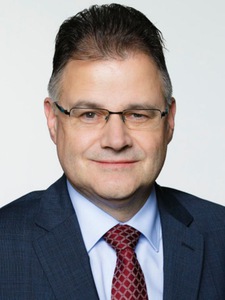 MP Braun wrote in his letter that the human rights situation worldwide is shocking, and China’s human rights issues account for a large part of it. He condemned the CCP’s persecution of religious and ethnic groups and Falun Gong practitioners.

He stated that the CCP has systematically persecuted peaceful Falun Gong practitioners for 22 years. Thousands of people have been killed, and the bloody persecution continues to this day.

“We condemn this behavior of the CCP and call on the CCP leadership to abide by the human rights conventions it has signed,” MP Braun wrote. “The Chinese people hope that the country will treat them as free and legal citizens in the 21st century, including respect for their basic human rights, life and body, the right to integrity, religious activity, and freedom of speech.” 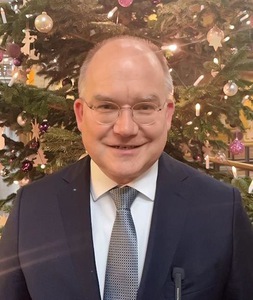 In his video message, MP Sebastian Brehm thanked all participants for their efforts for human rights. He said, “The human rights situation in the world is changing day by day. We must take actions to oppose human rights persecution, especially in China. Whether it is the existence of the death penalty, the death penalty for dissidents, or the persecution of other dissidents, such as the plundering of organs from Falun Gong practitioners and other people, we will make a clear decision in Berlin.”

“I can assure you that from the perspective of Berlin (the German government), we will do everything we can to, through the German Human Rights and Humanitarian Aid Commission, continue to take action on the human rights issues in China (the CCP), and even the world. Whether in trade negotiations or in dealing with international relations, we must not forget that human rights are universal values, indivisible, and must be observed,” he said.

Board Director of International Society for Human Rights (ISHR): The CCP Regime is a Criminal Organization

Manyan Ng, board director of the German ISHR, said that the CCP is clearly the world’s largest human rights violator, and China has become the second largest economy. This combination is quite dangerous, and the CCP violates human rights to a very serious degree. 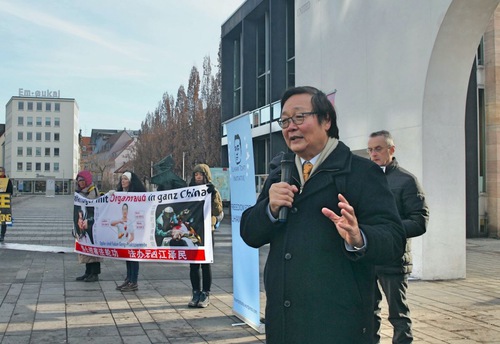 Manyan Ng, board director of the German ISHR, addressed the rally.

“The CCP has claimed that it has an organ donation system and that it has not obtained organs illegally. However, for hundreds of organ transplants every day, the CCP has not (transparently) proven the source of the organs.” He said, “In fact, more than 90% of the organs come from Falun Gong practitioners.”

Manyan Ng also mentioned that he often told the politicians he contacted over the years that their China policy was based on economic interests. He said this must be changed, and should be more based on universal values, such as human rights, the rule of law, and freedom.

Forum Chairman: Only by Burying the Communist Dictatorship Will the Persecution End 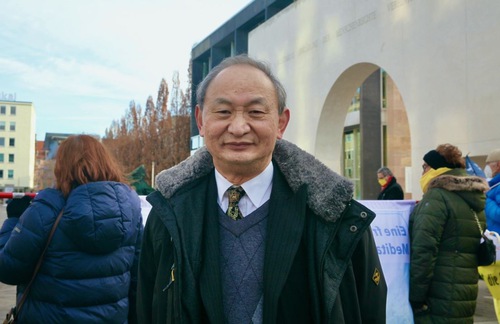 Liangyong Fei, chairman of the Forum for a Democratic China and Asia, addressed the rally.

“The CCP will not give up its suppression of Falun Gong for its authoritarian rule,” Fei said, “Now the CCP is under pressure from all over the world due to its persecution of Falun Gong. Its means may be relatively soft, but it has never stopped.”

“Australian Senator Abetz: People of Goodwill All Around the World are Supportive of Falun Gong Practitioners”