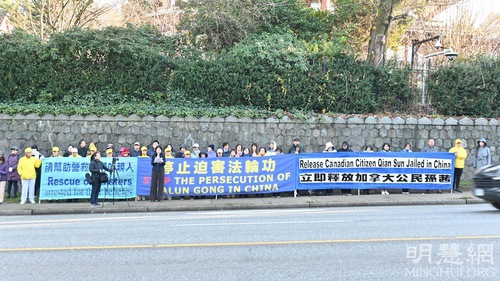 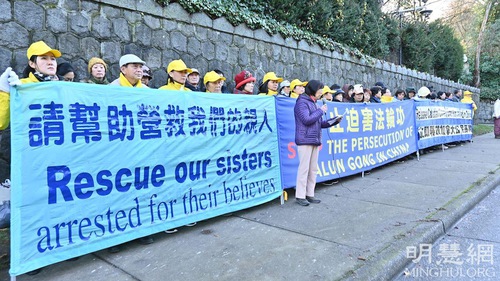 Practitioners held a rally in front of the Chinese Consulate in Vancouver on December 8.

Falun Dafa Association: The Canadian Government Should not Become the CCP’s Accomplice

Su Zhang, spokesperson for the Vancouver Falun Dafa Association, read the Canadian Falun Dafa Association’s announcement at the rally. The association urged the Canadian government to demand that the CCP release Canadian citizen Qian Sun, who has been subjected to violent persecution in China because of her belief in Falun Gong. They also asked that all family members of Canadians who are being persecuted be released.

Ms. Sun, a Canadian Chinese business owner in Vancouver, was sentenced to an eight-year prison term by the CCP on June 30, 2020, for practicing Falun Gong.

Ms. Zhang said, “At present, 12 family members of Canadians are illegally imprisoned in Chinese prisons or black jails, including Yang Jingyan, a 94-year-old Canadian citizen, and the daughter of an elderly Vancouver man.”

In her speech, Ms. Zhang pointed out that the CCP persecuting, torturing, killing, and slandering Falun Gong practitioners simply because of their belief is completely against morality.

She called on the Canadian government to protest the persecution, “The more our government remains silent on the persecution of Falun Gong, the more it will become an accomplice in the persecution. The weaker we become against the CCP, the more fiercely the CCP will attack Canada’s democracy, morals, and values, as we are witnessing now.”

Calls to Sanction CCP Officials Involved in the Persecution

The announcement also stated that according to the Magnitsky Act, one hundred and fifty Chinese officials who committed human rights violations should be sanctioned and prohibited from entering Canada, and their assets in Canada should be frozen.

On International Human Rights Day last year, the Falun Dafa Association submitted a list of 150 CCP officials to the Canadian Minister of Foreign Affairs and provided evidence that these officials have seriously violated the human rights of Falun Gong practitioners.

Magnitsky-style laws are named after Moscow lawyer Sergei Magnitsky. He was arrested and imprisoned in November 2008, after exposing tax fraud by Russian officials. After being detained in a Moscow prison for one year, where he was tortured, he died in November 2009. Magnitsky’s death aroused a strong response from the international community.

The United States and Canada passed the Global Magnitsky Accountability Act in 2016 and 2017, respectively. The European Union of 27 countries passed the European version of the Magnitsky Act in December 2020. In March 2021, the EU sanctioned four CCP officials and one entity, and imposed sanctions on these individuals by enforcing travel bans and freezing their assets.

In her speech Ms. Zhang said, “Today in China, Falun Gong is still one of the largest and most violently persecuted groups.”

Ms. Tang is a teacher. After practicing Falun Gong, her many diseases were resolved and she became a kinder and more peaceful person. Simply because she told others about her beneficial experience, she was detained by the CCP authorities in June this year. She was imprisoned for the same reason from 2014 to 2018. She had a heart attack and went into a coma during while imprisoned.

Her daughter Ms. Zhang said, “The CCP’s persecution of Falun Gong since July 20, 1999 has caused great trouble and harm to countless practitioners and their families.”

She called on the Canadian government and members of parliament to make efforts to defend Canada’s values of democracy, freedom, and respect for human rights.