(Minghui.org) Today’s news from China includes incidents of persecution that took place in 14 cities or counties in 11 provinces, where at least 20 practitioners were recently persecuted for their belief. 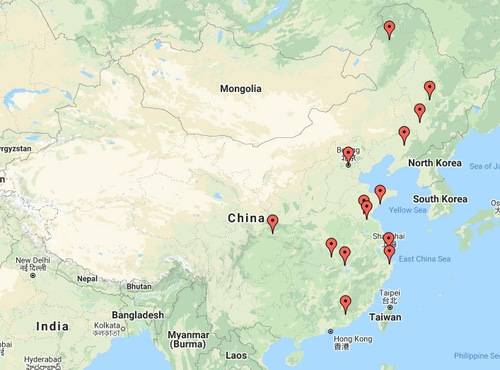 Ms. Li Yuzhen was sentenced to four years in prison by the Daowai District Court and fined 10,000 yuan. Ms. Li pleaded not guilty and submitted an appeal.

Ms. Cui Ying was sentenced to one year and three months in prison by the Chaoyang District Court.

On October 21, 2021, officers from the Longjiang Police Station, Hantai District, went to Mr. Zhang Mingxin’s home. They photographed him and pressured him to sign guarantee statements renouncing Falun Gong.

On September 29, 2021, officers from the Wuhan City Police Station and the Domestic Security Division broke into Ms. Ai Li’s home and arrested her. She was then taken to the Yangyuan Brainwashing Center in the Nanhu District.

On June 5, 2020, deputy village secretary Zhong Lijiang of Zhongjiaying Village, Baishan Township, Changping District, led officers from the Baishan Township Police Station and the 610 office to Ms. Zhang Weiying’s home. They pressured her to give up practicing Falun Gong and videotape her.

Zhong pressured Ms. Zhang’s husband several times, saying that their children would lose their jobs and be expelled from school if she did not give up her faith in Falun Gong.

On June 25, the secretary ordered Ms. Zhang’s daughter to go to the village committee office. He told her to persuade her mom to give up her spiritual belief Falun Gong and threatened her with her job. A few days later, he pressured her to sign guarantee statements on her mother’s behalf. She refused.

In late October, Tang Yong and another officer from the Shahe Police Station, Chaisang District, went to Mr. Chen Jiusheng’s home. They confiscated a photo of Falun Gong’s founder and some printed materials.

On October 12, 2021, five officers from the Zhangjiang Police Station and local stability management office broke into Mr. Dong Weidong’s rental home. They took him to the local property management office and interrogated him. Afterward, they videotaped his residence and warned him not to tell anyone what happened.

On September 29, 2021, five officers from the Lanshan District Police Department went to Ms. Xiao Huilan’s home. They videotaped her home and confiscated photos of Falun Gong’s founder and her Falun Gong books.

On October 13, 2021 Ms. Shi Ronghui was arrested by officers from the Domestic Security Divisions of Lianyungang City and Donghai County. She is held in the Lianyungang City Detention Center.

Ms. Wang Yanhua, her husband and their grandson went to Hailar by train on September 30, 2021. They were taken to a room near the exit and searched by the Hailar Railway Security Officers. They checked every bill they had in cash and found 4 bills printed with Falun Gong information. They videotaped and confiscated the money. Ms. Wang was also videotaped and forced to sign the list of confiscated items before she was released.

On October 20, 2021, Mr. Xie Hanzhu and his wife from Meixian District were arrested.