(Minghui.org) Every Saturday afternoon, people walking from Stockholm’s city center to the Old Town (Gamla Stan) can see Falun Dafa practitioners at the public square, Mynttorget. When they learn how practitioners are mistreated in China by the Chinese Communist Party (CCP) for their spiritual belief, many passersby were deeply moved. One said, “Thank you for being for kind and courageous. This information is important.” 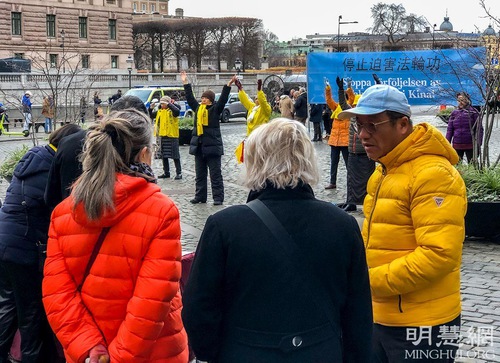 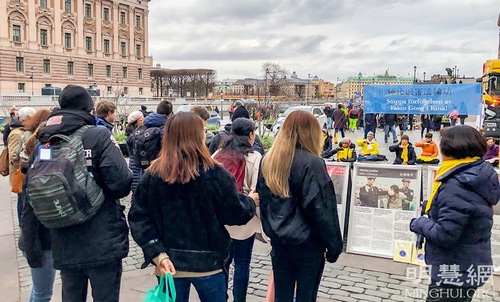 Every Saturday, practitioners hold activities at Mynttorget to tell people about the persecution in China. People stop to watch as they demonstrate the exercises and learn more about the practice. 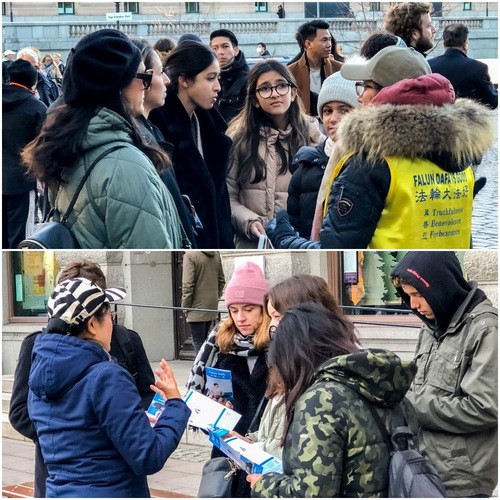 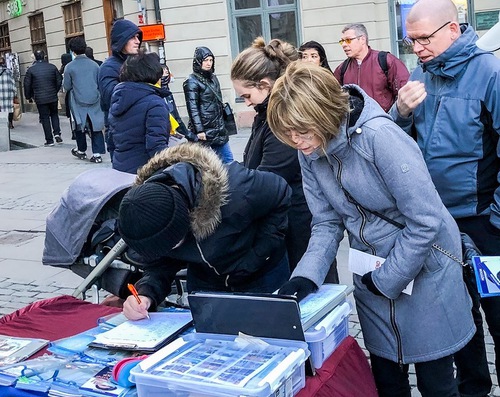 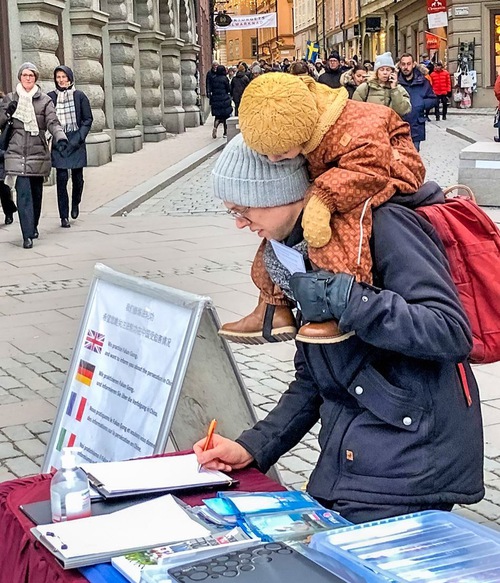 Passersby talked with a practitioner to learn about Falun Dafa and then signed a petition to stop the persecution in China.

Located next to Parliament House, Mynttorget is a popular tourist attraction. In contrast to other protest groups, Falun Dafa practitioners have always been calm and peaceful, including when they explain the brutal suppression in China. Many people said they were touched by their peace and energy. Some decided to learn the exercises. 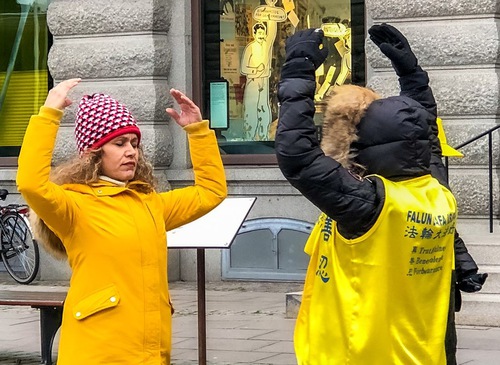 Police Officer: I Want to Try This

Shortly after practitioners set up the booth on November 13, two police officers came. They said there would be two large groups protesting at the public square that day. They said practitioners could end earlier if they were worried about potential conflicts.

A practitioner coordinator showed their permit for that day and chatted with the officers. He explained that because their faith in Truthfulness-Compassion-Forbearance, Falun Dafa practitioners were arrested, detained, and tortured in China with some becoming victims of forced organ harvesting by the CCP. The officers listened quietly and said they would be around in case any help was needed.

One officer asked more questions about the practice and said he was interested in practicing Falun Dafa. Having to face all kinds of issues and troubles at work, he hoped it would reduce stress and bring relief. “I will read it this evening,” he said as he put a flyer in his pocket.

The Importance of Conscience

Cynthia is from Chile, and she and her husband live in northern Sweden. After signing the petition calling to end the atrocities in China, she talked with a practitioner for a long time.

She specifically thanked practitioners for raising awareness of the brutality in China by the CCP. “Obviously, communism’s goal is to destroy moral values and bring down mankind,” she said, “It is so clear now.”

She said the principles of Truthfulness-Compassion-Forbearance are very good. “They help us to follow our conscience, something very critical for our society,” she added.

Stockholm resident Basel said he could feel practitioners’ sincerity and kindness while he spoke with them on November 27. “This place is usually crowded and noisy,” he explained, “But as soon as I got close to your booth, I could tell this is a peaceful field which is really wonderful.”

Having traveled to many countries and seen many things, he said forced organ harvesting by the CCP is very vicious. “The regime treats individual lives like numbers. It not only covered up the pandemic inside China but also led to its spreading around the globe.”

Basel said practitioners are good and courageous people. “My heart will stay with you practitioners,” he said. “Your kindness will make people and the world a better place.”

The CCP Is Doomed

A man from Albania read all the posters. He was not surprised to hear that the CCP kills Falun Dafa practitioners for their belief and harvests their organs. Coming from a former communist country, he knew that the CCP would face serious consequences for persecuting the innocent.

He said that practitioners holding activities to tell people is very meaningful. After taking photos of all the posters and the petition he had just signed, the man uploaded them to his social media account and showed it to a practitioner. “Many of my followers work in consulates in different countries,” he said, “I will help them stay informed about this tragedy and bring it to an end.”

One day, two Chinese students in their 20s came. While pointing to a poster they asked a practitioner, “Do you have evidence for this? What exactly is Falun Dafa?”

Knowing they had been misled by the CCP’s propaganda, the practitioner explained how millions of people around the world experienced physical and moral improvement after practicing Falun Dafa. The practice originated in China but is persecuted there, she said, adding that practitioners outside China protest peacefully to counteract the lies the CCP fabricated to slander Falun Dafa.

“In China, the CCP confiscates Falun Dafa books so people do not have access to the truth,” she said. “If you read Zhuan Falun, you will know that what the CCP says about Falun Dafa are all lies.”

Both students listened quietly and thanked the practitioner for the information. One of them immediately accessed the Epoch Times website and quit the CCP’s Youth League and Young Pioneers she had joined as a child. She also took a picture of her certificate of quitting the CCP and saved it on her phone.

“Heilongjiang Woman Sentenced to Prison for Her Faith”