(Minghui.org) Today's news from China includes incidents of persecution that took place in 9 cities or counties in 6 provinces, where at least 24 practitioners were recently persecuted for their belief. 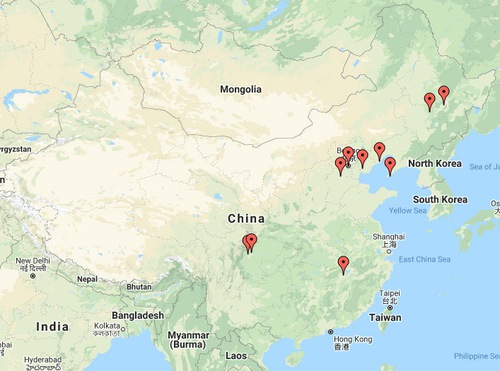 Ms. Deng Xiuying was arrested by officers from the Suizhong City Domestic Security Division on October 9, 2021. She is being held in the Huludao Detention Center for 15 days of detention.

Ms. Li Xiaoguang was arrested on October 9 and was released after five days of detention.

Ms. Wang Yuhe, 80, was arrested again by officers from the Heishijiao Police Station in Shahekou District on October 14, 2021. She was officially placed under arrest and is being held in the Yaojia Detention Center.

In 2018, Ms. Wang returned home and was harassed on numerous occasions. In June 2021, her son-in-law Mr. Guo Qi, who was a Falun Gong practitioner, passed away as a result of persecution. Ms. Wang moved in with her practitioner daughter.

Ms. Song Shuhua from Mingyi Township, Laishui County, was reported to the police while talking to people about Falun Gong at the Beiqiulan Village farmers market on July 1, 2021. She was arrested by officers from the Yongyang Town Police Station. When the officers ransacked her home, they also arrested her husband Mr. Li Guolin. Both practitioners were taken to the Laishui County Lockup Center.

Mr. Li did not go to the procuratorate or the police station, and did not return home. The officers continued to go to Mr. Li’s home and harass his family.

Nine practitioners will be tried between October 25 and October 29, 2021. Five of them have been held in the Deyang City Detention Center, and they are Zhao Jie, Yang Zhiping, Yan Yulan, Bao Shuhua, and Long Shuping. The other four practitioners were released on bail, and they are Yu Yongqiong, Qian Shuju, Tang Lirong, and Cai Shangyu.

Ms. Xu Lihua, 73, was arrested and taken to the local detention center in July 2021.

Ms. Xu Fengrong from Lugang Residential Community was followed by officers from the Lubei District Police Department, the Diaoyutai Police Station, and the Domestic Security Division while she was distributing Falun Gong materials one night in mid-March 2021. She was arrested at home. She has been officially placed under arrest and is facing trial around the end of October.

On September 29, 2021, nine people from the village gathered at the door of Mr. Wang Shengpei’s house and harassed him. Later, Qian Zhengtian of Mengyang Town government and four people from the Pengzhou Municipal and Legal Affairs Committee threatened and pressured him and his wife to sign guarantee statements renouncing Falun Gong, which the couple refused.

Later, these people called the couple’s son, and told him to come home and unlock the door. They ransacked the place and confiscated Falun Dafa books, four radios, Minghui Weekly, and a receiver for watching NTD television programs. They also tore down Falun Gong informational couplets and pendants.

They threatened the couple’s son that his parents would either sign the guarantee statements, or be taken to the Chengdu Detention Center.