(Minghui.org) Today's news from China includes incidents of persecution that took place in 12 cities or counties in 6 provinces, where at least 23 practitioners were recently persecuted for their belief. 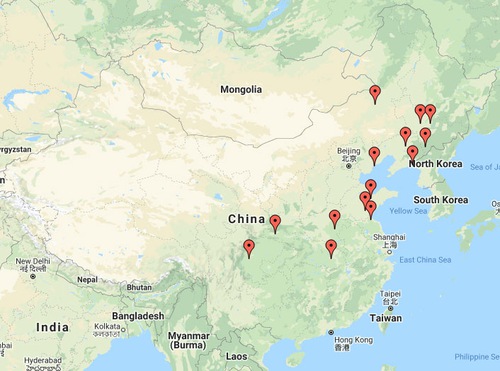 Ms. Zhang Suzhen and Liu Taiguo were released that day. Mr. Zheng Wenzhi was taken to the Pengxi Brainwashing Center. Mr. Zheng Xuedong was admitted to the Yongxing Detention House.

Mr. Li Zhendong was arrested on July 11, 2019. He was held in Dongling Prison in October 2021. Less than a month later, he was diagnosed with a life-threatening liver disease in the hospital designated by the judicial authorities. His family applied for medical parole but their request was denied.

Officers from the Bailutang Town Police Station in the Beihu District ransacked the homes of two practitioners on the morning of October 26, 2021. Eight officers went to Ms. Wan Yuping’s home. They searched all the rooms and confiscated truth clarifying materials. Ms. Wan was not there. The police found truth clarifying materials and Falun Gong books in Ms. Huang Fuming’s home. Ms. Huang was taken to the police station for interrogation and was released later that evening.

Ms. Li Yinhua’s home was ransacked by four police officers on November 6, 2021. They confiscated a box of Falun Gong books and truth clarifying materials. Ms. Li was working in the fields at the time.

HuYugen (gender unknown), over 70, was harassed several times by the local police and government officials in Qinglong Town in the Pengshan District from November 3 to 6, 2021.

Mr. Xu Xiangyang was arrested at home by three officers from the Zhengyang Police Station around 3 p.m. on November 4, 2021. He was taken to the police station for interrogation and was released that evening.

Three officers including Zong Yan from the Yongji Police Station went to Ms. Yu Mei’s home around 5:40 p.m. on November 10, 2021. They asked Ms. Yu and her mother if they still practiced Falun Gong and wanted to know where Ms. Yu worked.

Three staff members from the West Street Neighborhood Committee in Tianpeng Town went to Ms. You Quanfen’s home on the afternoon of November 11, 2021. They called Ms. You when no one answered the door. After Ms. You let them in, one of them quickly took some photos and then they left. Ms. You and her family have been harassed multiple times in the past two years.

Four officers from the Jiangzhuang Police Station went to Mr. Wang Zhili’s home on November 5, 2021, and searched it. One of them even walked on Mr. Wang’s bed with his shoes on. They didn’t find anything that they were looking for.

Ms. Cai Zefang, in her 80s, was arrested by officers from the Chengnan Town Police Station in Yingshan County on January 2021. Her home was ransacked and Falun Gong books and other personal belongings were confiscated.

Ms. Cai received a notice from the procuratorate, ordering her to go to the Yingshan County Court. Ms. Cai refused to sign the “on bail pending trial” document at the courthouse. Under pressure, her family member signed it and Ms. Cai was allowed to go home.

Three officers from the Puyang Street Police Station went to Ms. Xiaohong’s home around 8 a.m. on November 11, 2021. They ransacked it and confiscated Falun Gong books, a photo of Falun Gong’s founder, four computers, truth clarifying letters, etc. A computer expert was called in to check her computers. Ms. Xiaohong and her daughter were arrested and taken to the police station. Her daughter was released but Ms. Xiaohong is still being held in the police station.

Several people went to Ms. Shao’s home in the Hanxiying Building on Zongguan Street in the Qiaokou District around 9 a.m. on November 9, 2021. They ransacked it and confiscated desk calendars with information about Falun Gong on them.

Mr. Li Xingsheng has been harassed many times by Wulongbei Police Station officers since 2018. His home was ransacked twice and many Dafa books were confiscated. He was arrested twice, and each time his family had funds extorted from them in exchange for his release. Mr. Li was sentenced to six months in prison to be executed at home by the Dandong Police Department this summer. His salary was suspended.

Ms. Mo Yaqin was harassed at home by deputy Liu Haiquan and other officers from the Wulongbei Police Station around October 20, 2021. The police photographed and videotaped her. They confiscated her Falun Gong books. Her family member was called to the police station and forced to hand over 2000 yuan.

Ms. Yu Guizhen was arrested by Xixin Police Station officers around 9 p.m. on October 26, 2021. Her home was ransacked. Many personal belongings were confiscated, including her Falun Gong books, computer, printer, a box of desk calendars, cell phone, and ID card. Ms. Yu was held in the police station for one day and then taken to the Weizigou Detention House. After 15 days, she was taken back to the police station on November 1, 2021. The next day, she was admitted to the No.4 Detention Center in Changchun.

Ms. Jing Fengmei was arrested by Anqing Police Station officers on October 28, 2021, and taken to the Weizigou Detention Center. Her family went to the police station to request the formal detention notice. Officer Wang Shuang did not give it to them and just said that Ms. Jing would be detained for 15 days. Detention center officials called her family and said that they would be taken to the detention center if Ms. Jing refused to be “transformed.”

“72-year-old Woman Sentenced a Third Time for Her Faith”