(Minghui.org) Outside Kamppi shopping center in the capital city of Helsinki, Falun Dafa practitioners held their usual information activity on November 13. Every Saturday they share the beauty of the mind-body practice with passersby and inform them of the Chinese Communist Party’s (CCP) persecution of the practice in China. Through years of unwavering effort, local residents have paid attention to the crime and more people come forward to sign the petition calling for an end to the persecution. 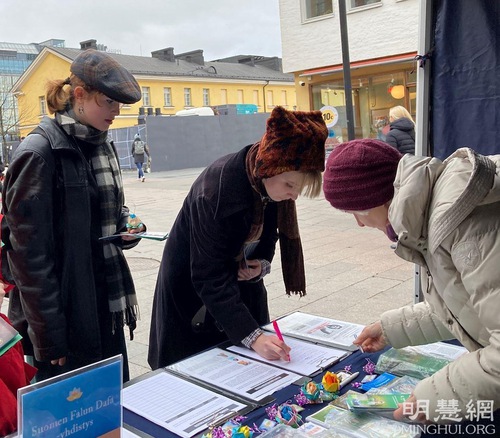 Locals sign the petition to support ending the persecution.

As soon as he saw the banner, Hannu signed the petition. He said, “I’ve received your information twice outside the Chinese embassy and know about this.”

After Tommi, a lawyer, signed the petition, he said, “I am a lawyer. You can contact me at any time if you need legal help.”

Jarmo, a massage therapist, said more than once, “I want to sign this” even before a practitioner spoke to him. He elaborated that he had a thorough understanding of communist regimes: “The CCP media lies all the time. They smile at you on the surface, then stab you in the back. I share information about the CCP’s lies all the time on my social media platform.” 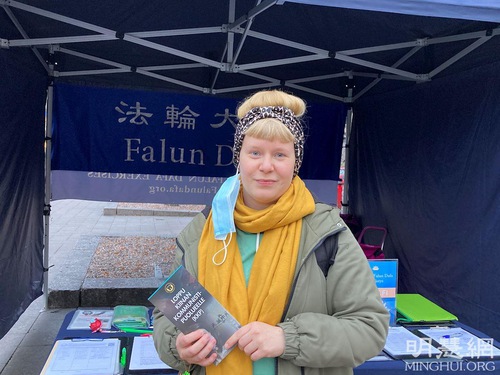 Olga said, “Practitioners are doing something important. You have done well.”

Olga, a nurse, said, “I’ve heard about Falun Dafa before and been moved by their efforts to raise awareness. They are very peaceful. They are doing something very important, making efforts in the areas of freedom of speech and freedom of belief.”

About the CCP’s human rights violations she said, “The truth cannot be covered up. Everyone has rights, especially the right to live. The government cannot control people using such extreme measures. You have done well. Keep it up.”

In regard to the CCP’s information censorship, she said, “That is too bad. Although Chinese people know many things, they cannot freely express their views. We will be always with you.”