(Minghui.org) Two events, a bomb cyclone and an atmospheric river, brought a severe storm to northern California on October 24, 2021. This led to rainfall amounting to 138.2 mm (or 5.44 inches) in Sacramento, breaking the record of single-day rainfall since 1880.

A bomb cyclone is a rapidly intensifying storm within a 24-hour period when the barometric pressure drop exceeds 24 millibars, according to meteorologists. The atmospheric river, on the other hand, is a flow of rain and moisture.

The two events combined together, leading to the strongest storm in the past 26 years, or the third strongest since 1950, reported the San Francisco Chronicle. PG&E, the main utility company in the region, reported 646,000 households and businesses had lost electricity. Power was restored for most by Monday, October 25.

The Fukutokuokanoba undersea volcano, located hundreds of kilometers away in the Ogasawara island chain, erupted on August 13, producing 300 to 1,000 tons of magma. This not only formed two islands, but also resulted in floating pebbles near Okinawa Island by October.

The volcano has impacted fisheries and tourism, reported NHK. As of October 25, about 750 fishing boats had canceled their trips to the ocean to avoid potential engine damage caused by the pebbles. The coastline of Okinawa Island also appeared gray due to spewed pumice. Experts estimate it will take from one to two years to clean up the area and restore the coastline. 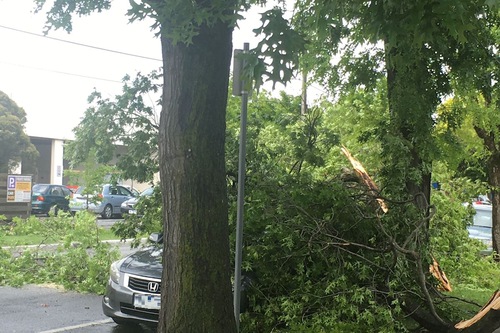 One tree fell on a car during a storm on the night of October 28 at Springvale, a suburb of Melbourne, Victoria.

A major storm hit Victoria, Australia, on the night of October 28, leading to power outages over a large area, with 500,000 households losing electricity.

Many trees fell in residential areas, and some damaged houses. The roofs and balconies of some houses were also damaged by the gust. As the capital of Victoria and the second-most populous city in Australia, Melbourne is also the largest port in the country. But many 20 and 40-foot shipping containers were also blown sideways by the wind. The recorded wind speed was up to 100 kilometers (or 62 miles) per hour on the morning of October 29, and up to 143 kilometers (or 89 miles) per hour on nearby islands.

The Age, a major daily newspaper in Melbourne, reported that about 85,000 Victorians still had no power as of early October 30, and some could wait for days before the power could be restored.