(Minghui.org) Today’s news from China includes incidents of persecution that took place in 13 cities or counties in 9 provinces, where at least 14 practitioners were recently persecuted for their belief. 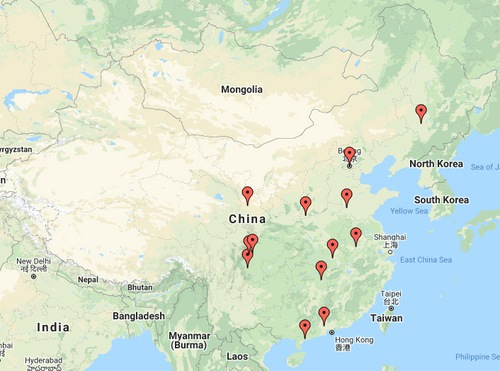 Ms. He Xianggu, 60, was arrested by officers from the Qingshuitang Police Station on May 16, 2021. The police ransacked her home and confiscated informational materials about Falun Gong. She was held in the Changsha City No. 1 Detention Center and denied family visits.

On July 3, the police called her family and told them to pick her up at the Changsha City No. 1 Hospital. When they got there, Ms. He was already in a coma. She was admitted to an intensive care unit on July 4 and has since remained unconscious.

Relatives who wish to visit her must be screened by the Qingshuitang Police Station and searched before entering the ward.

In 2021, Ms. Pan was been repeatedly harassed at home and pressured to sign a guarantee statement to renounce Falun Gong. Her family members have been harassed multiple times and were told to exert pressure on Ms. Pan. She was scheduled to be tried on September 23, 2021.

Ms. Wang Xuezhen, 77, from the Yuexiu District was arrested by officers from the No. 2 Criminal Investigation Division of the Public Transit Police Department on July 9, 2019. She was first held in the Guangzhou No. 1 Detention Center and then transferred to the Haizhu District Detention Center at the end of February 2020. She was tortured and developed health issues while in detention. Ms. Wang’s back pain became so severe that sometimes she had to crawl on the floor.

On January 2, 2020, officers from the Baohe District Domestic Security Division, the Changqing Police Station, and the Wuhu Road Police Station arrested Ms. Li Cuiping from her home in Shuhong New Village. They confiscated all her Falun Gong books. The detention center refused to admit her because she did not pass the physical exam. She was then placed under residential surveillance and was harassed multiple times. Her son Mr. Ma Shan was also harassed several times at work.

Ms. Li was arrested again when she went to the bank in early September. She was taken to a brainwashing center. Shortly after Ms. Li returned home, the police told her she was scheduled to be tried in the Shushan District Court on September 24, 2021.

On September 14, 2021, six officers, both uniformed and plainclothes, knocked on Ms. Chen Yuping’s door. Her family did not open up. The police knocked for half an hour before they finally left.

Mr. Zhang Luchan, a former assistant engineer with a university degree, was deprived of his job because of his faith in Falun Gong. He had to work as a temporary bridge cleaner to get by since October 2020.

On September 10, 2021, Wang Daowen from the New District Domestic Security and the director of the division pressured Mr. Zhang to sign guarantee statements renouncing Falun Gong. They threatened to get him fired or to transfer his household registration elsewhere.

On September 19, 2021, Wang Daowen found Mr. Zhang at work on the bridge and told him to go and die. He said he would take Mr. Zhang to the brainwashing center.

On September 8, 2021, four officers from the Lvxin Road Police Station broke into 74-year-old Ms. Wang Guofeng’s home and arrested her. They ransacked her place and took her Falun Gong books. Later that day, Ms. Wang returned home and was placed under residential surveillance.

Ms. Liu, in her 80s, was recorded by surveillance cameras when she mailed truth-clarification materials. On September 9, 2021, her home was ransacked.

On April 18 and September 12, 2021, Ms. Yang Shanrong from Qingsheng Village, Mengyang Town, was harassed by three officers, including village secretary Gu Xiangfei and village clerk Chen Shichao. They pressured Ms. Yang’s daughter, son-in-law, and granddaughter to make Ms. Yang sign the statement renouncing Falun Gong. They said Ms. Yang’s family members would lose their jobs and be expelled from school if she did not give up her faith in Falun Gong.

On September 18, 2021, officers from the Jiutai District Fuxing Community Management Office went to 71-year-old Ms. Dai Yaoqi’s home and told her to sign guarantee statements renouncing Falun Gong, which she refused to do.

On or about September 15, 2021, Mr. Jia Guoxi was arrested at work in Xi’an by plainclothes officers.

On February 4, 2021, about ten officers from the Fangshan District Domestic Security Division, Yingfeng Police Station, and Hongta Community Committee office in the Yanshan District broke into the home of Ms. Chen Hong’e in the Fuyan Xincun Residential Community in the Fangshan District. They ransacked her home and confiscated her Falun Gong books, photo of Falun Gong’s founder, cell phone, USB drives, and other items.

Ms. Chen was released on bail after being held for 5 days.

“Thoughts about Calling Out to Master at Critical Moments”