(Minghui.org) Falun Gong practitioners in Ireland held a parade and rally on September 25, 2021 in the capital city Dublin to support the 384 million Chinese citizens who have renounced their memberships in the Chinese Communist Party (CCP) and its youth organizations. Senator David Norris provided a letter showing his support for the event.

Although it will take another month before all COVID social distancing restrictions are removed, many Irish people are walking through the streets, and many people stopped to watch the parade. They read the message on the banner concerning the quitting the CCP movement, with some waving and giving thumbs up to express their support. Spectators praised the parade saying, “You have done a great job!” “We admire you!” Many signed the petition to call for an end to the persecution of Falun Gong in China.

A rally was held outside the Irish General Post Office, a landmark building located at the end of the parade. A number of cars sounded their horns as they drove past the parade to show their support. A resident kept walking over to say to practitioners, “I admire you greatly!” Some Irish people listened to all the speeches at the rally, and then signed the petition to stop the atrocities against Falun Gong. 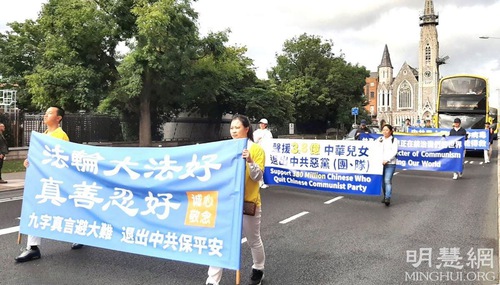 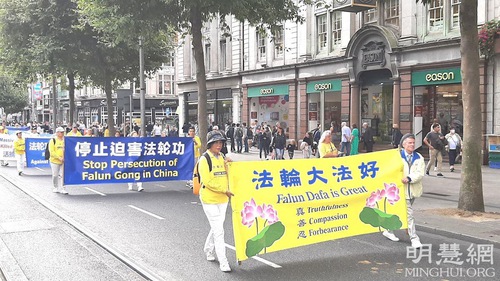 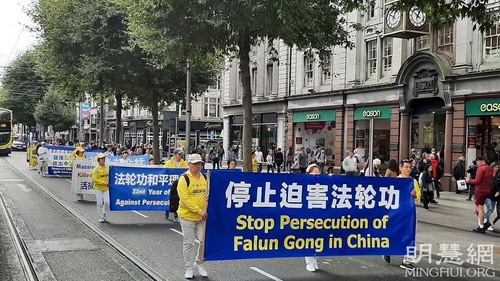 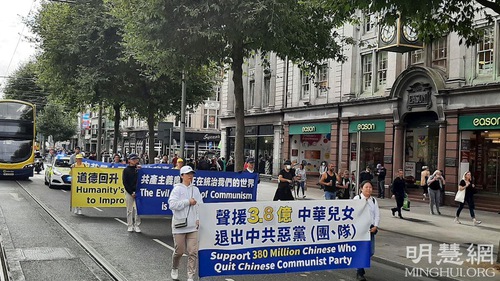 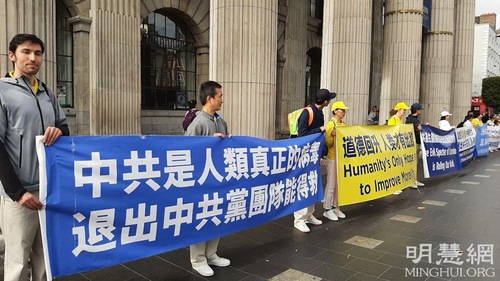 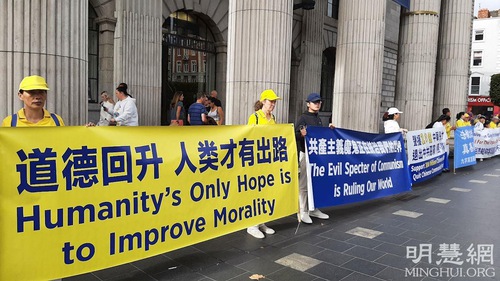 A parade and rally was held in Dublin, the capital city of Ireland, on September 25, 2021 to support the 384 million withdrawals from the CCP.

Letter of Support From a Member of the Irish Parliament

Senator David Norris, a member of the Irish Parliament, wrote a letter to the organizers of the event to express his support. He said, “I have always opposed all forms of torture, be it physical, sexual, mental, or racist. I abhor any form of discrimination hence I support everyone of you in seeking fair treatment for your friends and family who are struggling in China. Everyone has the right to freedom of thought, equality and justice. I hope this can be realized through your efforts.”

You are Doing Something That Gives the Most Hope 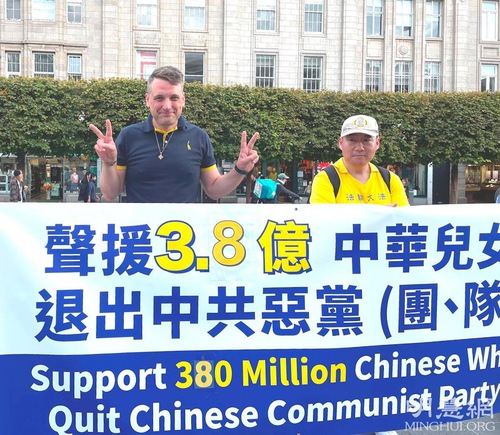 Samuele Ruffini (left) took a photo of the rally, and posted it on his social media platform to share with friends. He also expressed his support for the brave Chinese citizens who have quit the CCP.

Mr. Samuele Ruffini, who is from Italy, followed the parade from start to finish. He happily took a photo with a practitioner and the banner with the message: “Support 380 million Chinese who have quit the CCP.” He then posted the photo on his social media platform to share the information with friends. He also showed the photo to other spectators to encourage them not to be afraid of the CCP. He praised that what practitioners are doing “is the greatest hope.”

He began paying attention to the CCP because of his father’s experience in the military, and Italy’s fascist history. He has been following China’s suppression of Hong Kong citizens and the persecution of the Uyghurs. He concluded, “the CCP is the cause of the problem” after reading a lot of information and analyzing the situation. “The CCP does not hide its ambition of expanding its military presence and infiltrating the Western world. If this continues, the regime may start a war and bring on a global catastrophe.”

Mr. Art, who studies authoritarianism, returned to the rally to show his support soon after signing the petition to end the brutalities. He said he has studied Soviet communism for a long time. He is certain that China’s control of the media and propaganda tactics are the same as that of the Soviet Union – it means deceiving people. Criticizing the Party or those in power, or opposing the CCP, is considered going against the motherland. Additionally, arresting those who dare to voice their understandings, or who are able to influence others, is one of the CCP’s tactics. Besides, the CCP controls the state media, and prohibits social media platforms that are not within its control.

A spectator who works in the IT industry in Dublin even explained things to others in detail after signing the petition at the rally. He said he opposes the CCP and thinks it is using communist ideology so that one group of people can take the wealth of another group of people. He also emphasized that he is against the CCP, not Chinese people.

Another two Irish residents said that the first time they learned about the CCP’s forced organ harvesting from detained prisoners of conscience was over a decade ago. Seeing that this crime is still taking place, they said it made them feel sad. They said they hoped their signatures and voices of support can help end the brutal persecution in China sooner.

Mr. Zhao, a Falun Gong practitioner, spoke at the rally about the his personal experience of being detained and tortured in a Chinese labor camp, for practicing Falun Gong. He exposed the regime’s lies and evil nature with facts. His experience is testimony of the CCP’s brutal treatment of Falun Gong practitioners. Worst of all, it includes organ harvesting. Unfortunately, these atrocities continue today.

Ms. Liu, who was the MC for the rally, also introduced the CCP’s infiltration in Western society, including it’s global ambitions through the “one belt one road” project, “Confucius institute,” using economic benefits to coerce Western media and high tech companies to self censor information. Ms. Liu said that Western society should see through the true nature of the regime and stop it. 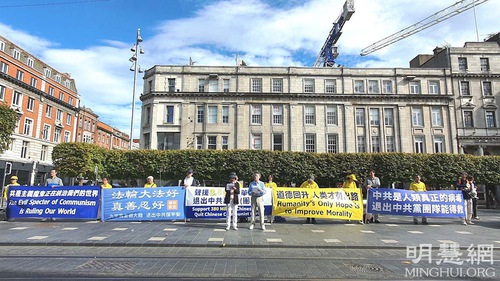 Ms. Liu, spokesperson for the Ireland Quit the CCP center, spoke at the rally.

Ms. Liu, who is spokesperson for the Ireland Quit the CCP center, said in her speech, “The CCP has done a lot of bad deeds since it came into power. Every Chinese citizen faces an important decision in choosing whether to renounce the Party. When people’s morals decline, gods will punish them through disasters. The current CCP virus is a warning to people to hold on to their kind nature. I hope Chinese citizens in Ireland can seize the opportunity to quit the CCP and be blessed in return.”

According to Ms. Liu, more Chinese in Ireland have quit the CCP since the pandemic began, and are willing to talk to practitioners to learn the truth about the persecution. Some even started to visit the Minghui website. She said, “Ms. An, who has been living in Ireland for nearly two decades, renounced her membership with the help of practitioners. She raises her thumbs up when she sees practitioners, saying, ‘I support Falun Gong! The CCP has been suppressing Falun Gong for so long, yet practitioners continue to resist the persecution. They are indeed brave and resilient. It is admirable!’”

“Pharmacy Owner Dies in Prison While Serving Time for His Faith”