(Minghui.org) Falun Dafa practitioners held activities near Hannover’s train station to introduce the spiritual practice on October 16, 2021. They demonstrated the exercises, told people about the Chinese Communist Party’s (CCP) 22-year-long persecution, and collected signatures on a petition calling for its end. 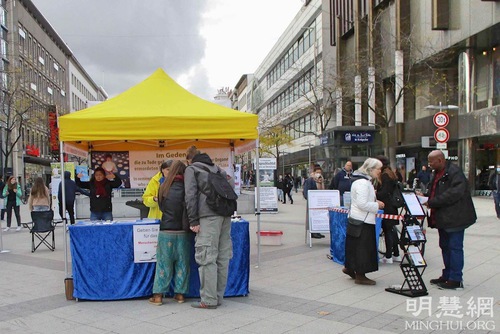 Practitioners hold activities near the Hannover train station on October 16 to introduce Falun Dafa and expose the CCP’s persecution. 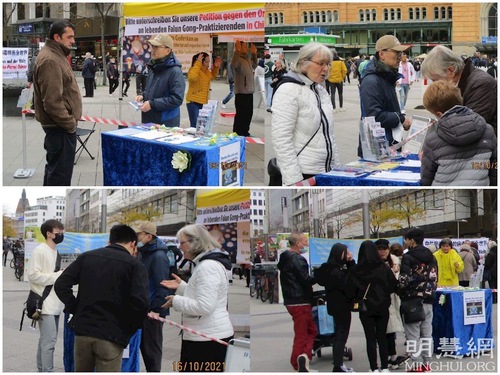 Passers-by talk with practitioners to learn about Falun Dafa and sign the petition against the persecution.

Hannover is the capital and largest city in the German state of Lower Saxony and is known for it’s highly developed industrial manufacturing. CeBIT, the world’s largest information technology exhibition, is held there. Falun Dafa practitioners hold an awareness-raising event in Hannover once a month.

On October 16, practitioners hung up banners as well as display boards with information about Falun Dafa and how the CCP persecutes the practice. Many passers-by stopped to read the information and signed the petition. Some had long conversations with practitioners. 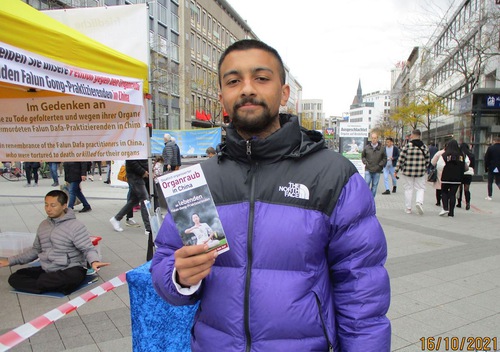 Daniel, who works in a children’s aid agency, had a long talk with a practitioner. After learning about Falun Dafa he signed the petition to end the persecution. He said, “If my signature is helpful to this (stopping the CCP’s persecution), I am happy to sign it.”

A group of Chinese students lingered in front of the booth. They said they seldom heard of Falun Dafa and knew little about the CCP’s persecution. A practitioner explained what Falun Dafa is and why the CCP persecutes the spiritual practice. One of the Chinese students said, “Of course the persecution is wrong.”

They felt that openly talking about the bad things going on in China would hurt it’s image. The practitioner explained that the CCP is not China and does not represent Chinese people.

The practitioner further explained that the CCP’s persecution accelerated the decline of Chinese morality and brought great harm to China. If the CCP’s reckless behavior is not stopped Chinese society may collapse. Therefore, exposing the persecution in the international community, disintegrating the CCP, and stopping the CCP from persecuting Falun Dafa are done to save Chinese morality.

The practitioner also offered them the book, Nine Commentaries on the Communist Party and suggested that they read it. Two of them accepted copies of the book and said they would read it.

When practitioners disassembled the booth that evening, more people came and signed the petition. One man asked about the practice site and said that he wanted to learn Falun Dafa.