In a pollution-free environment, blue is the largest area of color that people can see when they step out the door because it is the basic color of the immense sky.

The color of the sky, as we know, is not a single, unchanging blue. It is sky blue during the day and dark blue at night, and along with the change of seasons and weather, it is sometimes purple-blue, sometimes azure blue.

Many ethnic groups believe in the harmony of heaven and earth and are aware of a gemstone on earth that seems to reflect the color of the sky. It reflects a whole range of blue tones, such as dark blue, sky blue, purple-blue, green-blue, and so on. This gemstone is called “qingjin shi” in Chinese, and “lapis lazuli” in the West. 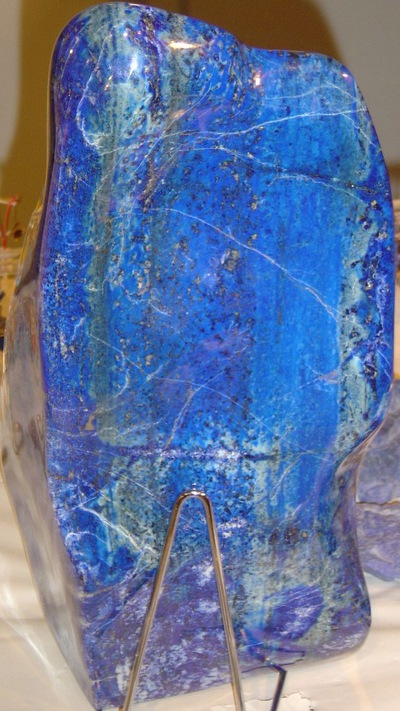 Since ancient times, different ethnic groups seemed to recognize that this kind of gemstone symbolizes the vast and sacred cosmos. Thousands of years ago, both the Sumerians and ancient Egyptians, as well as the native Indians on the other side of the globe, all treasured lapis lazuli as something extremely precious. It was used in sacrificial rituals, worship ceremonies, or rites to drive out demons. These traditions ran deep in the culture, and some of their aspects survived and were carried on by other civilizations even after the original civilizations disappeared. For example, up until the Qing dynasty in China (1644 to 1912), at grand ceremonies to honor the heavens, the emperor would wear a dark blue official court outfit and a chain of 108 lapis lazuli beads.

We all know that there are multitudes of blue minerals on our planet, and there are quite a few gemstones that are “sky blue” in color. So why is “lapis lazuli” so special?

Again, the reason lies in its unique connection to gods and Buddhas. Here are a few examples.

The moon god in Mesopotamian mythology in Akad, Assyria, and Babylon is called “Sin” (“Nannar” in Sumerian). Legend has it that he had a special facial feature, that is, his beard was made of lapis lazuli.

Similarly, in ancient Egypt it was believed that a god’s body was made of gold but that the hair of a god was made of lapis lazuli.

“Ra” was the primary name of the sun god in ancient Egypt. He was also revered as the creator of everything. The ancient Egyptians believed that this god had a gold body and lapis lazuli hair.

The Chinese people would have no problem understanding that gods have gold bodies and blue hair, because that is how most images or statues of the Buddha are portrayed.

There is also a kind of pigment used in Buddhist art called “Buddha Head Blue” or “Buddha Blue” to color the hair of Buddha statues or portraits. “Buddha Blue” can be made from different raw materials, such as azurite powder, lapis lazuli powder, or a mixture of both.

The ultramarine used for the hair of the Buddha statue is highly saturated and dark, creating a striking contrast with the gold. In ancient times, in order to better reflect the blue tone on the head of the golden body, pigments made with refined lapis lazuli powder were used.

However, due to the high cost of such pigments, their application was mostly seen on the small and medium-sized Buddhist relics in the western regions of China, where Buddhism had a great influence. In other areas in China, people have largely used azurite as the raw material to make similar pigments for a thousand years. Of course, there are many Buddha statues where the hair is not colored. But in Tibet, pigments made of refined lapis lazuli powder were extensively used on the hand-drawn thangka paintings. 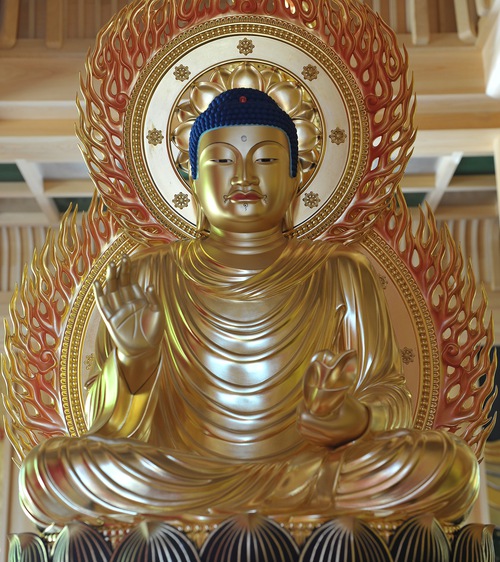 The Buddha statue of Bukuchi Tathagata enshrined in the Nativity Temple of Renhuain in Tamana City, Kumamoto Prefecture, Japan. This Buddha, one of the five tantric Tathagatas, presides over the northern Lotus Paradise. It is all golden except that the hair is blue, which is a main feature of Buddhist art.

Ultramarine is a deep blue pigment often used in Western art. As in the East, the original ultramarine pigment was made by grinding lapis lazuli into a powder. It was the finest and most expensive blue used by Renaissance painters and was often used for the robes of the Virgin Mary to symbolize holiness and humility. Such pigment was also used in traditional paintings of God and Jesus. 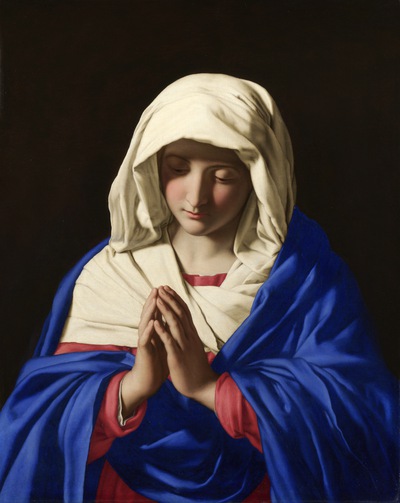 The Virgin Mary, mother of Jesus, painted by the Italian painter Giovanni Battista Salvi da Sassoferrato circa 1654. The ultramarine blue used in the painting was made by grinding lapis lazuli into fine power. 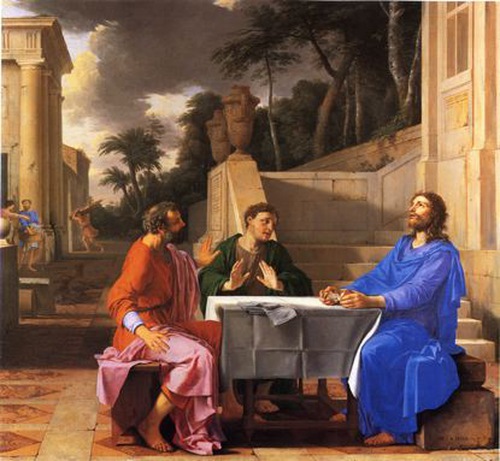 The use of pigments made from precious raw materials such as gold and lapis lazuli was quite common in religious artworks since ancient times. People often think that this is due to people’s reverence for gods, so expensive materials are used in the paintings to honor the gods.

While that is true, that only shows reverence for the gods on a surface level. The fact that these materials were chosen was not only because they were expensive but also due to the connotations behind them. In fact, all things have intelligence, and everything has a deeper reason for its existence, even raw materials. One may understand such connotations with an enlightened mind when the time comes.

Another thing to note is that lapis lazuli was not called “qingjin shi” in Chinese prior to the Ming and Qing dynasties. This is because lapis lazuli was always imported from other countries since ancient times in China, and different names were given to it during different periods and in different places, and it could also be confused with other blue minerals. Such confusion could be seen in ancient Chinese classics. However, when we refer to literature on the topic in foreign languages, that confusion can be easily ironed out.

Take “Medicine Master and King of Lapis Lazuli Light” for example. He is called “Maître guérisseur de la Lumière de Lapis-lazuli” in French, and “Maestro della Medicina dalla Luce Lapislazzuli” in Italian. The paradise he presides over is known as “Liuli Shijie” in Chinese, “Eastern pure land of Pure Lapis Lazuli” in English, “Terre pure de pur Lapis-lazuli” in French, and “Pura terra di puro Lapislazzuli” in Italian. The equivalent to “Liuli” is “Lapis lazuli” in those three foreign languages. Clearly, “Lapis lazuli” is what we call “qingjin shi” in Chinese today. 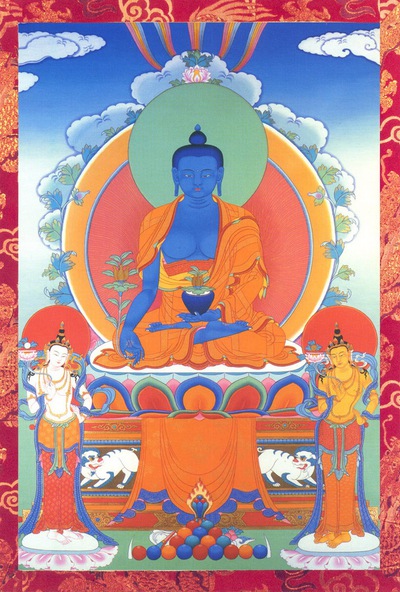 Although lapis lazuli is regarded as one of the seven treasures in Buddhism—and greatly valued by jewelers—genuine cultivation practices since ancient times have all required their practitioners to let go of attachments to material comforts and possessions. This is because what is most important is to improve one’s character and virtue and strengthen one’s righteous faith in gods and Buddhas.

This series of articles has covered only a few typical representative traditional colors leaving many others left out. The main point I want to make is that the traditional color of China is not the sharp dazzling red that has been so misused in Communist China today.

Through the study of history, we’ve found that true traditional colors are closely connected to gods, Buddhas, heaven, and earth. Whether it’s the “golden body” revered in Buddhism or the “purple qi” respected in Taoism, these colors give people a very positive feeling. They appear noble and solemn, extraordinary and elegant. In contrast, mundane concerns of daily trivia and pursuits for fame and gain in the mortal world are referred to as “red dust” in Chinese, and places where sex-related businesses and drug abuse are prevalent are often referred to as “red-light districts.” Clearly, people share similar feelings about colors.

Of course, all colors have their uses and can be utilized accordingly in a whole range of applications. I am not trying to engender hatred for the color red per se, either, as red also manifests at different levels and in different dimensions in a variety of forms of red. What I disagree with is the abuse of one color for harmful purposes, as in the irrational and blind worship of the sharp red color in today’s Communist China.

I hope this series of articles provides a new perspective for people who respect traditional colors and appreciate their deep connotations. My hope is that we may once again enjoy the beauty and brilliance of our traditional culture, which regrettably continues to be diminished in the modernized humanistic environment we live in today.