(Minghui.org) Practitioners in Hualien introduced people to the beauty of Falun Dafa and its principles – Truthfulness, Compassion, Forbearance at Haoke Square in Ji’an town on October 17, 2021. They also exposed the brutality of the 22-year-long persecution of the spiritual discipline by the Chinese Communist Party (CCP), including forced removal of organs from incarcerated practitioners. Many local residents said that organ harvesting is a crime against humanity and the CCP should stop its violent acts at once.

Others asked where they could learn Falun Dafa. When Mr. Huang heard the melodious exercise music, he came over to find out more. When he learned that the meditation practice is taught free of charge, he put his palms together in front of his chest in a gesture expressing respect and gratitude. 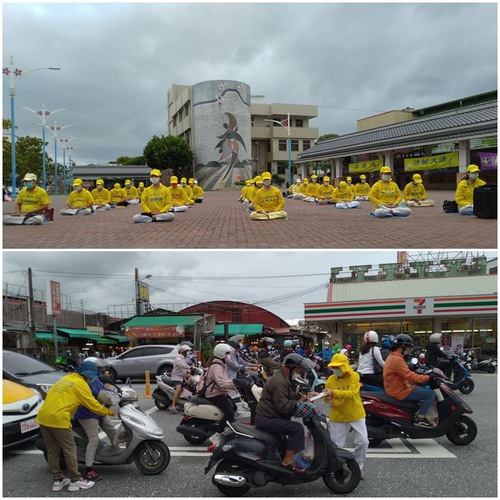 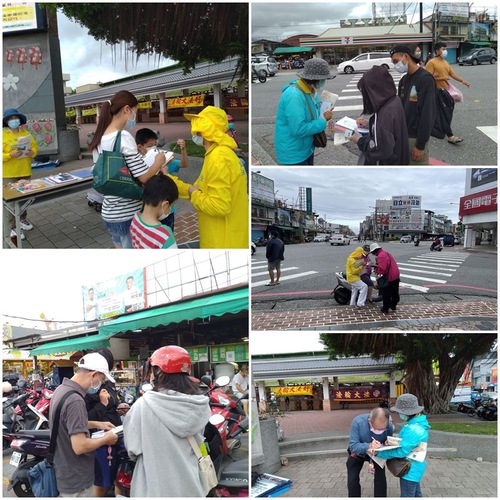 Local residents condemned the CCP for its brutal persecution of the meditation practice.

Ms. Qiu, who has a stall at the night market at Haoke Square, moved to Taiwan from China after she got married. Having lived on the island for over a decade, she often experienced the kindness and simple, warm nature of the Taiwanese people. She told practitioners that she regularly saw people practicing Falun Dafa in various parks and outdoor areas. She was surprised initially because it was banned in China. Later on, through news reports on TV and online, she realized that she had been deceived by the propaganda in China. She agreed to renounce her membership in the Young Pioneers, an affiliated organization of the CCP.

Mr. Chen owns an electrical and plumbing business. He signed a petition to support ending the persecution and said, “The CCP is an inhumane organization. Its members only think of their own benefits. They don’t care about the lives of ordinary citizens like persecuting Falun Dafa practitioners for so long, sending the Uyghurs to labor camps and in recent times, harassing Taiwan through condemnation and military coercion. It makes one angry. But the more they threaten Taiwan, the more united we become and I believe in the heavenly principle that good will be rewarded, the evil will be punished.”

Ms. Hu said her husband’s work sent him to China and the couple lived there for many years. She knew about the persecution of Falun Dafa. As soon as she heard there was a petition, she said, “Everyone should speak out and stop this persecution because it will only end if ordinary people are not afraid to stand up. Otherwise the bad people will continue to wantonly do bad things. The CCP has only been in power for maybe 60, 70 years. They launched many political campaigns and persecution. Many people in China are terrified of the regime and don’t care about others. They ignore everything that has nothing to do with their personal gain. But what they don’t realize is that as long as the CCP is around, persecution comes hand in hand because no one knows who will be their next target. I am delighted to be able to sign this petition to support Chinese citizens in resisting the persecution. Thank you!”