Practitioners in Ankara, the capital of Turkey, held an activity on September 18, 2021, in Uğur Mumcu Park. The park, with its large green area, is a popular place for Ankara citizens to gather on weekends.

They demonstrated the Falun Dafa exercises, distributed leaflets, demonstrated how to make paper lotus flowers, and told people about the persecution of their faith that is still going on in China. They also held a signature drive, inviting people to express their support for an end to the persecution.

The activity attracted great interest from the public. Many people learned the exercises, signed the petition, and picked up contact information about the group exercise site in Ankara. Several women at a nearby handicraft booth learned about the practice and participated in the activities whenever they had the opportunity. 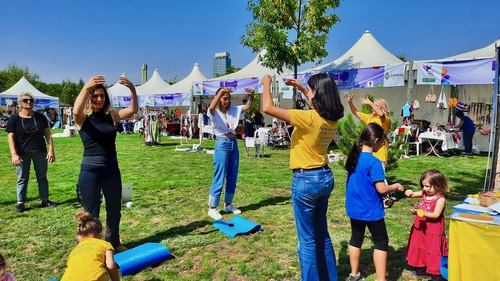 Practitioners demonstrate the exercises in Uğur Mumcu Park in Ankara to introduce Falun Dafa and raise awareness of the ongoing persecution in China. 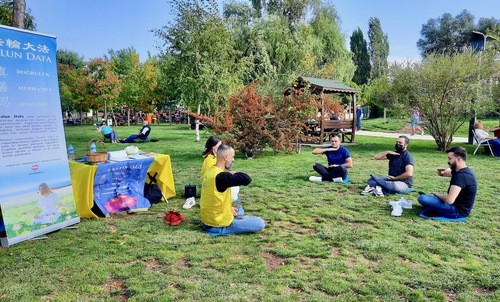 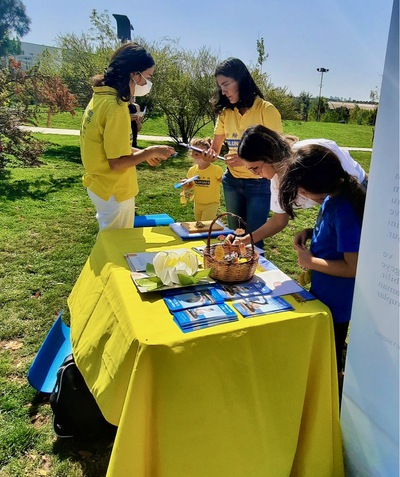 Ms. Buket Hanım and her daughter sign the petition to show their support for ending the persecution.

Buket Hanım and her eight-year-old daughter did the exercises with the practitioners. Buket felt a strong affinity for Falun Dafa. She said while doing the exercises, “I literally felt that my soul was purified. I felt fit and peaceful.” When she heard about the persecution of Falun Dafa in China, she was appalled and signed the petition calling for an end to the persecution. 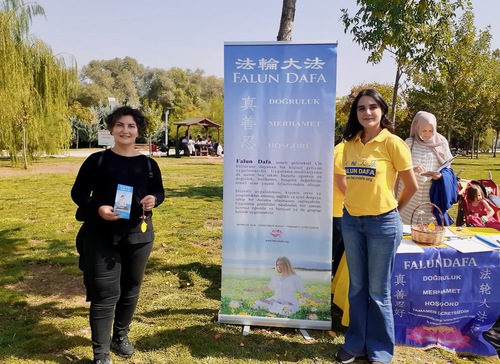 Hilal Başaran on the left

Hilal Başaran, a professional in the economics field, did the fifth exercise. “During meditation, I heard the sound of nature more clearly. I relaxed with the meditation music,” she said afterward. 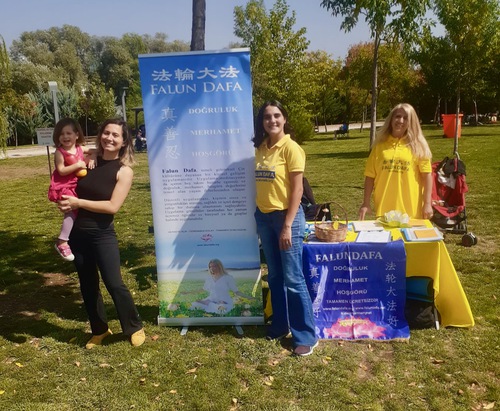 Esra and her daughter

Esra, a math teacher, stopped by with her little daughter and did all the exercises. After doing the exercises, she shared, “I felt that the energy within me was directed and a stuck energy was loosened. I felt the movement of my qi energy.” 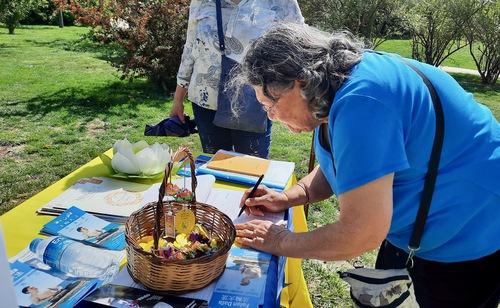 An older woman named Saliha Senol and her daughter asked practitioners about Falun Dafa. When they heard about its physical and spiritual benefits, they were very impressed. Then when they heard about the persecution in China, they said that the Chinese regime has really done a lot of damage to the world. Despite her difficulty walking, Ms. Saliha went to the stand and signed the petition with her daughter. Then they learned the exercises. They planned to come to the exercise site and continue doing the exercises.

Ten-year-old Mehmet Yiğit and his friend learned how to make origami lotus flowers and did the exercises. Mehmet, who had picked up a brochure and read it, pointed to the persecution part of the brochure and asked a practitioner, “Why are they persecuting Falun Dafa?” The practitioner told them about Falun Dafa’s principles of Truthfulness-Compassion-Forbearance and explained that bad people (the Chinese Communist Party) are persecuting good people.

At the end of the day, while the practitioners were packing up the booth, the two children came back. They said they were upset about the persecution and said that they would come back the following day to do the exercises again.

Falun Dafa practitioners in Istanbul demonstrated the peaceful and serene exercises in front of the Chinese Consulate on the evenings of September 4 and September 11. They talked to people about the persecution in China and held a signature drive calling for an end to the oppression.

Practitioners demonstrate the exercises in Istanbul on September 4, 2021.

Many people come to this part of the coastline on weekends to walk with their families.

The Falun Dafa exercises, performed with the beautiful music, as well as the practitioners’ banners with information about Falun Dafa and the persecution, drew a lot of attention.

As it got dark, more people stopped at the event. A number of people from nearby restaurants came over after dinner and asked for more information. They took brochures and signed the petition.

Tuğba, a retired stewardess, condemned the actions of the Chinese Communist Party (CCP), including its cover-up of the coronavirus outbreak that led to the global pandemic. She joined the signature campaign calling to end the CCP. 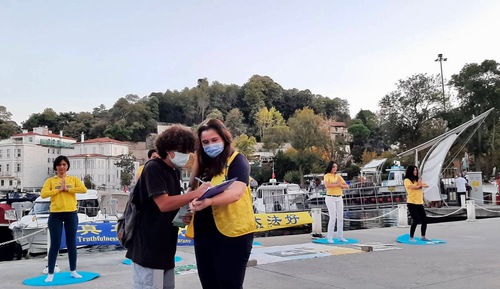 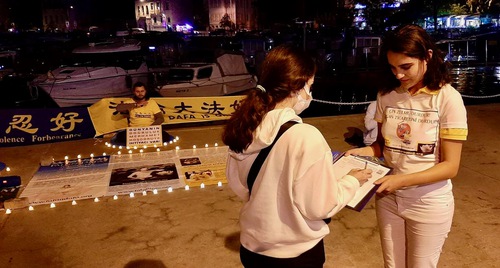 Signature drive to end the persecution and end the CCP

“Yunlin, Taiwan: Practitioners See Where They Can Improve in Cultivation During Experience Sharing Conference”