(Minghui.org) In pictures of Chinese people from dynasties past, the women wore ornate outfits that covered them from head to toe in layers and accessories. But there was more to their outfits than beauty alone. Traditional Chinese clothing—for both genders—served many functions, from showing respect to fostering health. 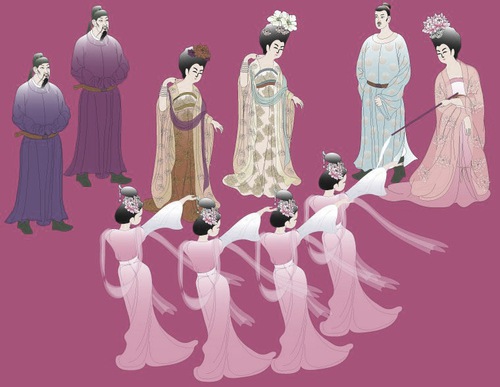 Headwear in ancient China was called futou. The custom of headwear started in the Han dynasty and was given the moniker futou during the Northern Zhou period (557-581 AD). In the Sui dynasty (581-618 AD), headwear became fashionable and widespread. By then, people of all social strata, regardless of their gender, enjoyed wearing some form of headwear and regarded it as an essential component of their daily outfit.

The custom of futou in ancient China was based on the theory of the Five Elements, the theory of yin and yang, along with the harmony of sancai—which refers to the interactions between heaven, earth, and humankind.

Heaven and earth manifest the patterns of yin and yang within day and night. It also cycles through the four seasons. Similarly, human bodies are comprised of five yin organs and six yang organs and manifest changes through the 12 regular meridians and the eight extra meridians that circulate qi, blood, and energy.

The ancient Chinese believed that heaven was round and the earth was square, and that humans were created with a round head and square feet in accordance with the laws of nature. Thus, man should live a well-rounded life that follows heavenly laws, while being fair and square in his dealings with others.

In addition, one’s life should be balanced according to the principle of yin and yang as well as the changes of the four seasons. That is, a person should refrain from anxiety, indulging in lust, and excessive outbursts of emotion. People should take good care of their health and nurture their virtue.

Floral hairpins were also common and symbolized blessings, festivity, and gratitude. People would wear them on special occasions, such as ceremonies and worship rituals that honored heaven and earth. Other occasions included festivals, royal court banquets, imperial awards, title ceremonies, congratulatory feasts for high scorers on imperial exams, wedding feasts, and so on.

According to Song Shi (The History of Song), “Futou and floral hairpins were known as headwear. They were worn to celebrate the revival of the country, to conduct rituals on the outskirts, and to follow the emperor’s return to the palace. They were fit for occasions equivalent to expressing gratitude to the sovereign.”

Many scholars and bureaucrats in the Tang dynasty fancied floral hairpins, and that tradition continued in the Song dynasty. There was a well-known story called the “Floral Hairpins of Four Chancellors,” about how Han Qi, Wang Gui, Wang Anshi, and Chen Shengzhi once wore the same style of hairpin at the same time and at the same place. All four of them later became chancellors during the Song Dynasty.

Bridegrooms in the Song Dynasty also liked to wear floral hairpins. Sima Guang, a renowned historian and high-ranking official at the time commented on the tradition in his book Shu Yi – Marriage Ceremonies: “The secular custom of the bridegroom wearing floral hairpins diminishes his masculine deportment. But if one should wear them, a couple of them would do.”

A third type of traditional headwear, the mo’e, is a circlet of fabric that wraps around the forehead. It is typically adorned with jewels and other precious metals and stones. Together, futou, floral hairpins, and mo’e also served a healthful purpose: they protected the Baihui acupoint from wind and cold.

Traditional Chinese medicine believes that “the head is the meeting point of all the yang meridians.” The Baihui acupoint is precisely where all these meridians intersect.

If this meeting point is injured, Chinese medicine believes that a person will experience dizziness, tinnitus, a sore neck, blurry vision, and sluggishness. In one case from Chinese history, a dysfunctional Baihui acupoint also put the crown prince of Guo into a deep coma. He was brought back to life by Bian Que, a legendary Chinese physician. Bian had to use an acupuncture needle to stimulate the prince’s Baihui acupoint, which revived him.

We can see that everyone in the painting above was wearing a belt around their waist, where the Dai meridian circulates.

It is said in a classic, “The Dai meridian starts at the Ji Xie acupoint. It goes around the waist and drops in the front like a belt. It supports all longitudinal meridians and keeps them in regular balance, just as a person wears a belt to support and balance his clothing.”

According to Nan Jing, a classic on 81 medical problems, if the Dai meridian is unwell, one will feel bloated around the abdominal area, as if sitting in water.

The Dai meridian can also be impacted by sexual intercourse. Specifically, Chinese medicine believed that if a person fails to refrain from various emotions and indulges in sensual pleasures, their Dai meridian will become weak. This in turn will harm the kidneys, exhaust the marrow, and make one’s back stiff and feet heavy.

Bian Que – Xin Shu notes a connection between excessive sexual intercourse and the kidneys through the Dai meridian. It also mentions other symptoms of a weak Dai meridian, such as stroke, gonorrhea, penile or vaginal discharge, kidney overstrain, cold limbs, abdominal pain, blood in the stool, bone atrophy, backaches, and general weakness. Additionally, Fuke Yuchi (a highly valued classic on gynecology by Shen Jin’ao, a physician in the Qing dynasty) further discussed the consequences for women who had excessive sex. The color of their vaginal discharge would signal problems of specific organs: green for the liver, red for the heart, yellow for the spleen, white for the lungs, and black for the kidneys.

Since the Dai meridian is key to maintaining health throughout so many different regions of the body, belts are worn over its general area to protect this crucial nexus.

The men in the picture above all wear long robes and boots, and they look virtuous and dignified. The ladies are clothed in long, sweeping dresses, elegant and graceful. Why did the ancients like wearing these long robes and dresses?

As mentioned above, a human body has 12 regular meridians and eight extra meridians—which are the Ren, Du, Dai, Chong, Yinwei, Yangwei, Yinqiao, and Yangqiao meridians. These extra meridians help the body replenish what is insufficient and store what is excessive.

The Yangwei, Yinwei, Yangqiao and Yinqiao meridians all originate from the ankle joint. Therefore, the long robes and dresses worn by the ancients were said to function as river banks, ensuring that qi and blood could flow efficiently in the right directions.

Degenerate Clothing Is Harmful to Health

We have seen that health was a great priority for the ancient Chinese in every aspect of their daily lives, including the way they dressed. But the situation has changed dramatically.

When you go out to shop or walk down the street nowadays, you see men and women wearing clothes with holes made intentionally. In summer, some people wear outfits that bare their shoulders, navel, and thighs. Some wear hip-huggers, tightly fitted pants with the waistline below the natural waist of the wearer. In winter, some people wear no socks and some leave their hair a mess.

To the ancients, dressing that way would be considered inappropriate, as it would attract evil spirits and harm one’s health. This is because many important acupoints are located on the head, neck, shoulders, knee joints, ankles, and so on. If these body parts are constantly exposed, it would cause the body’s yang energy to leak out and allow for the evil substances to get into the body. These substances would block the acupoints and damage the internal organs.

The ancients dressed with a view to protecting themselves from the six adverse elements—wind, cold, heat, humidity, dryness, and fire. Their clothes were not only visually elegant but also presented a sense of purity and respect.

In clothing today, however, the most vulnerable parts of the human body are very often left bare. The ancients talked about having shoulder pain in their 50s, whereas people today complain about shoulder pain in their 20s. Besides, revealing clothing also encourages unhealthy thoughts in people near the wearer. Clothing or accessories with images of skeletons or devils were also considered targets for negative energy.

In a time like today, where a complicated society is causing people much stress, perhaps we can take some inspiration from the way the ancients lived. It may not just benefit ourselves, but make our society better as a whole.