(Minghui.org) January is the summer season in New Zealand, and the weather is warm and sunny with little rainfall. Locals take advantage of the pleasant weather to go on holiday, and many outdoor festivals are held throughout the country. As New Zealand is one of the few countries in the world where the coronavirus is under control, people’s lives are relatively normal. Falun Dafa practitioners also participate in these events to share the benefits of the ancient meditation practice.

Several practitioners drove to a town on the Coromandel peninsula on January 2, 2021, to attend the annual Keltic Fair. Although the Coromandel Peninsula is not a large city, it is a popular tourist destination on North Island, attracting many local and international visitors every summer. The Keltic Fair, which was held on the second day of the new year, is the largest event on North Island.

Besides an information booth, the organizers also found space for practitioners to demonstrate the Falun Dafa exercises and to give a Chinese waist drum performance at one of the main entrances. The waist drummers drew many spectators. 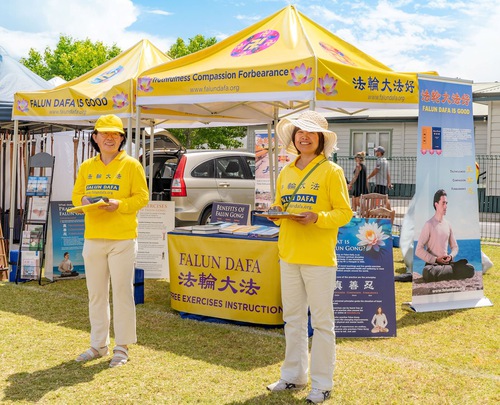 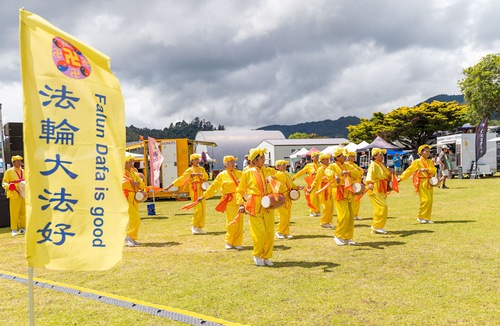 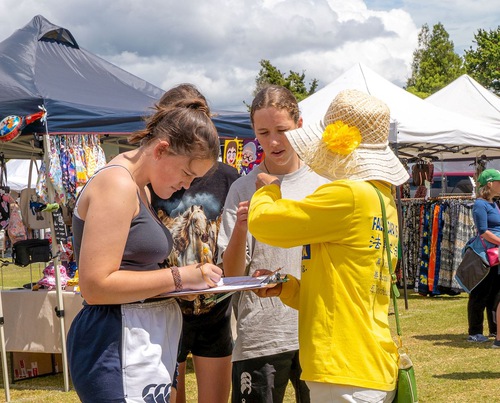 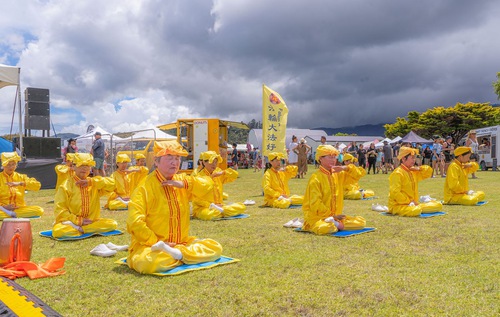 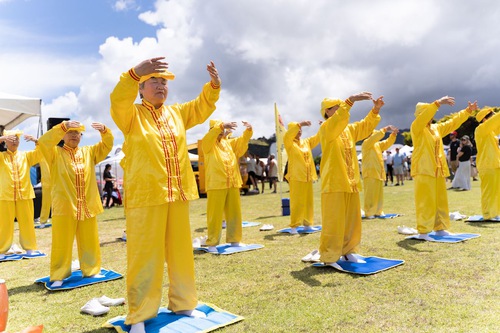 Falun Dafa practitioners introduced people to the practice during the Keltic Fair on January 2, 2021. They demonstrated the exercises and gave a traditional Chinese waist drum performance.

Many fair attendees were surprised that the waist drummers were elderly Falun Dafa practitioners. They were impressed by their health and vitality and were very interested in learning about Falun Dafa. Several people had their photos taken with the waist drummers. They happily accepted brochures and paper lotus flowers. Some said they would read the information when they got home. Others said they wanted to learn the exercises.

John Grant, founder of Coromandel CFM, a radio station broadcasting in the region, approached practitioners after watching their waist drum performance. He said he saw practitioners’ car tour in another town in the area the day before and got a pamphlet on ending the Chinese Communist Party's (CCP’s) tyranny. He recorded the tour and posted it on the radio station’s social media page. He expressed admiration for practitioners’ courage in exposing the CCP’s atrocities and concern about the infiltration of communist ideology in New Zealand society.

Ms. Jocelyn James, the organizer of the fair, invited practitioners to do the waist drum performance on the main stage. Practitioners put up flags with the messages “Falun Dafa is good” and “Truthfulness, Compassion, Forbearance” on the grass in front of the stage. While practitioners performed on stage, Alan, a Western practitioner, introduced the benefits of the practice to the audience and told them about the persecution of Falun Dafa in China. He also explained how the communist regime’s cover-up of the coronavirus led to the global pandemic and asked people to sign the petition to help end the persecution of Falun Dafa by the CCP.

Brian is a retired accountant and has visited many countries. He told practitioners he knows a lot about the crimes committed by the CCP. He went to the information booth several times that day to talk with practitioners and express his admiration for their courage. Not only did he sign the petition, but he also took several brochures to give to friends. He planned to ask them to sign the petition online.

Edward, a New Zealander, was a supervisor at IBM’s office in China. He said he knew about the persecution of Falun Dafa but did not understand why the CCP does not suppress Buddhist followers. A practitioner replied that the regime suppresses all religions and that many Buddhist adherents in China have lost their spirituality and essentially become businessmen and politicians. However, the regime targeted Falun Dafa because it is a genuine belief, the practitioner explained. Edward signed the petition and thanked the practitioner.

“Japan: Practitioners Collect Signatures on New Year’s Day to Call for an End to Persecution in China”