(Minghui.org) In 1956, I was among the first group of 30 students chosen by the Chinese government to be sent to study computer science in the former Soviet Union. After a year of intensive Russian study right after I finished high school, I was sent to the Moscow Power Engineering Institute with 14 other Chinese students. Another group of 15 students were sent to study at the Saint Petersburg State Institute of Technology. We were considered future top Chinese scientists and fortunate people. 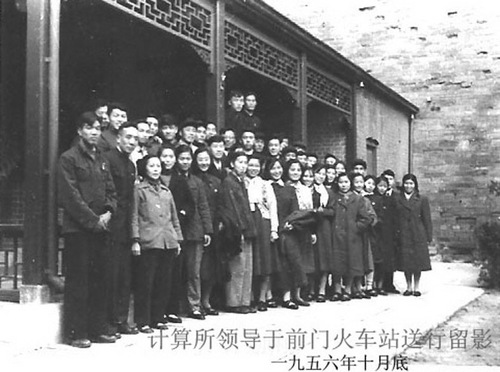 In October 1956, 30 students posed for a photo with leaders who saw them off at the front of Qianmen Railway Station. After a seven-day trip, they arrived in Moscow.

Five and a half years later in April 1962, all 30 of us finished our studies. As the first group to return to China after studying in the Soviet Union, we were assigned good jobs.

I am now 85 years old. In 1998, when I was 63, I clearly saw the evil nature of the Chinese Communist Party (CCP) from my past experiences. At the same time, I began to practice Falun Dafa.

I Believed in the CCP

I was born in the remote countryside in northern China. In the early 1940s, the Chinese communist army came to my village to “open up the area.” At night they used shovels to kill the villagers who disagreed with their deeds and threw their bodies into the river. They also ordered every family to kill their dogs.

In 1946, they carried out the “land reform” in my area. One father and son were labeled “landlords” and beaten to death.

As a child, I believed the CCP’s propaganda. I thought it was right to kill the “bully landlord” and the “counterrevolutionary.”

My paternal grandfather was a hardworking farmer. According to the CCP, as he owned farmland, he qualified as a landlord and was thus an enemy.

My grandfather was a kind person. He and my father opened a free school in the village and bought smallpox vaccine for all the students. When I was only eight years old, I began working on our family's land. My grandmother and my mother also worked in our fields.

Yet under the CCP’s brainwashing, I believed all “landlords” were bad people and I thought I should separate myself from my “bad” family.

After my family’s land was taken away by the CCP during the “land reform,” my mother, sister and I escaped from our hometown to Beiping, which later became Beijing. There we reunited with my father who had escaped earlier. In Beiping, I helped the family deliver newspapers and collect scrap iron.

I studied hard and passed the entrance exam to a middle school. I was a good student. Since my father removed a family-arranged engagement for me, I became a good example of “anti-feudalism” in my school. I was chosen by the school administrators to be a member of the Communist Youth League.

Because of my good grades and my “political correctness,” I was guaranteed a spot in high school, where I was chosen to become a CCP member. Right after I graduated, I was sent to study in the former Soviet Union. At that time, all I wanted was to study well and do something good for my country.

I was about 30 years old when the Cultural Revolution began. As a leader of a research group, I was labeled a “capitalist roader” (a CCP member who covertly plans to restore capitalism). I was expelled from the Party. I was beaten by the Red Guards and humiliated, including being paraded through the streets while wearing a dunce cap.

For the next three years, almost every day I was publicly denounced and criticized. My punishment was to sit on a small stool for hours. I was forced to clean toilets and corridors. My “crimes” included “being a spy for the Soviet Union” and the “filial son of a landlord.”

This was how I was labeled a “counterrevolutionary” even though I only wanted to serve my country.

How the CCP Deceived Chinese People

During the Tiananmen Square Massacre in 1989, my family lived in Muxidi, Beijing. From my balcony at night I could hear gunshots, soldiers yelling “Stop running!” and civilians’ voices: “Quick! Get him to a hospital!” I could see the fires along Chang’an Street.

That night my niece awoke screaming. She told us she had been in Fuwai Hospital earlier that day and saw many injured people and bloody bodies from the massacre. She was horrified.

We saw plenty of evidence that the troops used expanding bullets on citizens. Yet the CCP said in their broadcasts that they did not fire a single shot towards people. What a bunch of liars!

I Quit My Secure Government Job

After the Cultural Revolution, some of my old friends who were higher authorities helped get me transferred back to Beijing. I got a cadre position.

In the past, I used to believe the higher-ranking cadres were good people with high moral standards. But what I witnessed was the opposite. They obtained their high positions because they closely followed the CCP’s policies. They were also good at lying and sweet talking to their superiors. By this time, I was thoroughly disillusioned with the CCP.

I decided to leave. In 1997 I quit my stable government job and joined a collective enterprise. Later we created a joint venture company with Russia and I was stationed in Moscow.

My Wife Returns to Health

In 1997, my wife was diagnosed with rheumatoid arthritis. When Western medicine could not help her, we returned to China to consult doctors of Chinese medicine. When they could not cure her either, she decided to look into qigong. Around Chinese New Year in 1998, my wife was introduced to Falun Dafa. 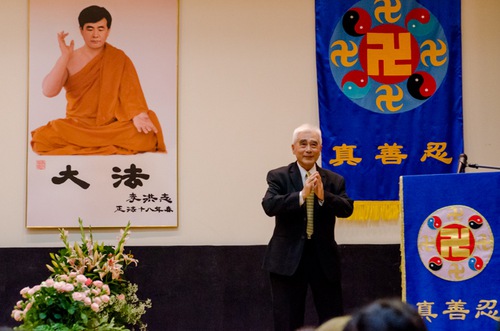 As soon as she began to practice, a relative warned her that Falun Dafa was classified as bad by the CCP. My wife ignored it. She said she would practice as long as it helped her.

Within two months after we returned to Moscow, my wife’s rheumatism was gone. We felt it was a miracle! I did not believe in qigong until my wife’s amazing improvement showed me that Falun Dafa was not an ordinary qigong school. In April 1998, I started to practice as well. We made a quick visit to Beijing and brought several cases of Dafa materials back to Moscow. Soon all my illnesses disappeared.

The Nature of the CCP

When the Nine Commentaries on the Communist Party was published in 2004, my wife and I immediately declared our withdrawal from the CCP and all its associated organizations.

The true nature of the CCP is lies, evil, and violence. So many Chinese people died as a result of its “movements” after it usurped power in China. Since 1999, the CCP has been persecuting Falun Dafa practitioners and even committed the crime of live organ harvesting!

During this special period in history, what is good and what is bad have become ever clearer. Those who continue to persecute practitioners should be concerned about being punished by heaven.

As a Dafa practitioner, I will hold firm and not be disturbed by superficial notions. I hope all my old classmates and friends will see the CCP for what it is and withdraw from it. This way they won’t be implicated when the Party is eventually held accountable for its crimes. I hope they will be blessed by holding the belief that “Falun Dafa is good” and “Truthfulness-Compassion-Forbearance is good.”

“The Tragedy of a Broken Family: A Young Father Persecuted to Death, His Brother Disabled”