(Minghui.org) Today's news from China includes incidents of persecution that took place in 19 cities or counties in 8 provinces, where at least 33 practitioners were recently persecuted for their belief. 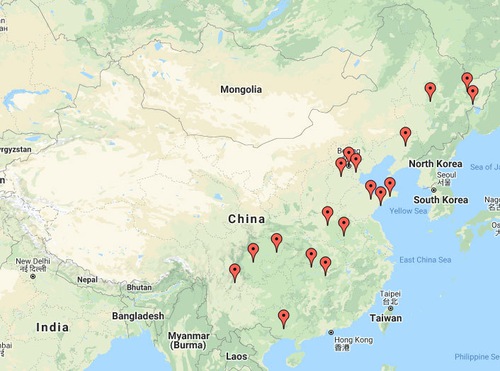 Mr. Li Yiheng was recently sentenced to three years and six months in prison and fined 10,000 yuan by the Daxing District Court. Mr. Li has filed an appeal.

Ms. Wu Junping in her 70s, was tried in the Gaoyang District Court on December 1, 2020. Her family received the verdict on December 30, 2020, that Ms. Wu was sentence to one year and six months in prison and fined 5000 yuan. Ms. Wu is currently detained in the Qingyuan Detention Center. Due to the pandemic, her lawyer is not allowed to visit her in the detention center.

Ms. Wang Aiping was harassed at the store that her relative owns by village official Wang Dianfu and others from Shuangsheng Village on December 1, 2020. She was pressured to sign the guarantee statement and was threatened with the firing of her family member and the blocking of her children’s future education opportunities. She refused to cooperate and was forcibly photographed.

Ms. Wang’s mother-in-law received a harassment call from Wang Dianfu on December 2, 2020. He requested she go to the village office. The nearly-80-year-old woman did not go.

More than 18 or 19 people went to the shop to harass Ms. Wang on December 3, 2020. These people were from the No. 2 Police Station, the General Administration Office, the Beidaying Police Station, the fire department, and the security bureau. They threatened to close and fine the store owner if Ms. Wang refused to sign the guarantee statement. Ms. Wang’s husband was afraid that his wife would be taken away and the relative would be implicated. He signed the statement against his will. These people snatched Ms. Wang’s Walkman before they left.

Ms. Wang was harassed again in her relative's shop. A group of people from the Political and Legal Affairs Committee, the General Administration Office, and the No. 2 Police Station, came with 12 documents and ordered Ms. Wang’s husband and her relative to make Ms. Wang sign them. They threatened to fine the shop. The harassment and coercion caused her relative to have a heart attack, which caused the shop to close. Ms. Wang’s husband was also frightened and became ill.

Because of this repeated harassment Ms. Wang had no other choice but to leave home.

Ms. Zhou Qiuli was arrested by officers from the Chaoyang Police Station on September 17, 2020. Her family was informed the next day to come and bail her out. A few days later when her family came to the police station, they were not allowed to see her. They later learned that Ms. Zhou was taken to the Nanning City Women’s Prison.

Her family received a call from Jiangnan District Court on January 12, 2021 and learned that her case had been filed on January 6, 2021 and she would be tried one week later. Her family only has one week to hire a defense lawyer for her.

Ms. Feng Xisong was reported to police for clarifying the truth and was arrested by officers from the Business Street Police Station on January 15, 2021. She was released one hour later.

Ms. Wu Cailian was reported to police for clarifying the truth to pupils in an elementary school. She was arrested by officers from the Xicheng Police Station in mid-December 2020. She was subjected to a 15-day detention by the Xicheng City Domestic Security Division and fined 20,000 yuan. Ms. Wu has returned home.

Ms. Zhou Danfeng and two other practitioners were reported to police for clarifying the truth in Xianzhong Township of Jiayi Town. They were arrested by officers from the Jiayi Town Police Station on December 28, 2020. Ms. Zhou was taken to the Yuxi District Detention Center in Yueyang City the next day. Now she is under official arrest and her case has been filed to the Procuratorate.

After Ms. Wang Aige was sentenced in the Huangdao District Court on December 26, 2020, Ms. Zhu Guoying, who was born in 1943, was sentenced to one year in prison and fined 5000 yuan in court.

Ms. Wang and Ms. Zhu were detained in the Pudong Detention Center on January 5, 2021.

Da Xiang and Sun Jie (gender unknown) were arrested on the evening of January 14, 2021 for distributing the truth-clarifying booklets. They were taken to the police department and were interrogated by Jiang Hongbin and Bai Wenbo from the Domestic Security Division. Their homes were ransacked. Nothing was found in Sun Jie’s home but the Dafa books in Da Xiang’s home were taken away. They were released on the afternoon of January 15, 2021.

Ms. Ding Yifan, 80, lives in Huanggu District. Officers from the Shelita Police Station in Huanggu District came to her home and took her to the Yuhong District Procuratorate. She was interrogated regarding the case of Wei Yuchi in early January 2021. She was questioned about her attitude towards Falun Gong and was pressured to sign the guarantee statement, which she refused.

Ms. Ding was taken to the Yuhong District Procuratorate again on January 15, 2021 and may face further persecution.

Ms. Tan Xingqiong, over 60, was harassed at home on August 5, 2020. Led by Chang Yuqing, village Party director, several people from the Yangjia Town Government and the town police station came to her home and ordered her to sign the guarantee statement, which she refused. They returned more than 10 days later and attempted to force her to sign her name on the statement.

Ms. Tan was harassed again on November 19, 2020 by twenty four people from the Yangjia Town Government. She was pressured to sign the guarantee statement which she refused.

Practitioner Du (gender unknown) recently came to Ms. Liu Yun’s home for a visit. Both practitioners were arrested. Their whereabouts are unknown.

Four practitioners including Zeng Xiaolin, Lu Wei, Zhao Changgen, and He Fuxiu were arrested at home in late September 2020. Their homes were ransacked. The group arrest was conducted by the Li County Political and Legal Affairs Committee and the Li County Police Department. The cases against the practitioners were filed to the Procuratorate. The sentencing proposals are based on the number of Dafa-related materials found in their homes and are as follows: Zeng Xiaolin, eight years and six months; Lu Wei, seven years and six months; Zhao Changgen, three years; and He Fuxiu, two years.

The cases against Ms. Pan Yuhuan and Ms. Yang Xinhong were filed to the Weidu District Procuratorate.

Ms. Li Shuxiang was arrested by plainclothes police on the afternoon of January 11, 2021 for clarifying the truth. She was found with the truth-clarifying materials including USB drives, booklets, amulets and paper bills with information about Falun Gong printed on them. Her family was informed of her arrest that evening by officer Wang Haoyu from the Beiguan Police Station. Wang told the family to prepare about 1500 yuan for her medical examination the next day. If Ms. Li Shuxiang failed the required physical examination, the family could pay 10,000 yuan to bail her out.

Ms. Li was taken to the No. 2 People’s Hospital the following morning to undergo the medical exam. Her family paid the 1200 yuan fee. She passed the exam.

Ms. Li’s home was ransacked by officer Wang Haoyu and another female officer on the afternoon of January 12, 2021. More than 40 Dafa books and several hundreds of bills with truth-clarifying messages were taken away.

Ms. Li was taken to the Changyi City Detention Center on the afternoon of January 12, 2021 under seven-day custody, which was later changed to 14 days. Her family was informed that her case was sent to the Procuratorate.

Ms. Li Guoxin, 72, was arrested on June 30, 2020 at Hebin Park. Her home was ransacked. She was held in the Wugang Detention Center after her arrest was approved. It was recently confirmed that she was sentenced to nine years by the Lushan County Court. She was taken to the Zhengzhou Prison.

Prior to her latest term, Ms. Li was arrested on August 23, 2016 for filing a criminal complaint against Jiang Zemin, the former leader of the Chinese Communist Party who ordered the persecution of Falun Gong. She was held in the Xixie Detention Center for 14 days and released on September 6, 2016.

“The Key Is to Assist Master in the Fa-Rectification”