(Minghui.org) Today's news from China includes incidents of persecution that took place in 15 cities or counties in 11 provinces, where at least 24 practitioners were recently persecuted for their belief. 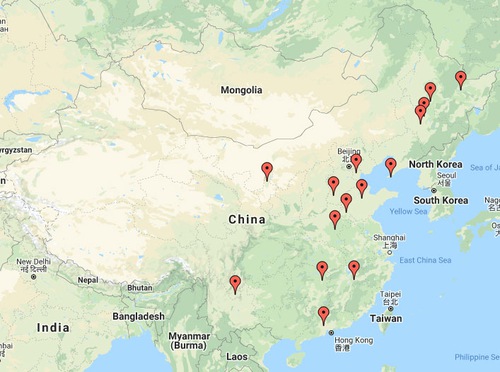 Mr. Chen Xingbo, 67, was arrested in front of his home by officers from the Xingdu District Domestic Security Division on November 24, 2019. The Xiangdu District Court sentenced him to three years in prison on August 26, 2020. His appeal was rejected by the Xingtai Intermediate Court at the end of December 2020. He was imprisoned in the Tangshan Prison on January 5, 2021.

Mr. Luo was arrested by a dozen officers, including Li Xiang, head of the Huili County Domestic Security Division, on April 21, 2019.

Mr. Li Rongbo’s younger brother was harassed by officers from the Zhuchengzi Town Police Station in December 2020. The officers later called Mr. Li’s younger sister, threatened her, tried brainwashed her, and demanded that she locate Mr. Li, who was out of town, and have him sign a guarantee statement. But the officers did not get what they demanded.

Zhang Jing (gender unknown), unable to bear the ongoing police harassment anymore, wrote a letter using their real name to the Juye County Police Department in November 2018. The letter shared the practitioner's firsthand experience of the tremendous mind and body improvements gained after practicing Falun Gong, the suffering caused by three and a half years of imprisonment, followed by release on bail because of heart failure.

Zhang Jing was deprived of a pension by the Juye County Human Resources and Social Security Bureau in March 2020. Their medical insurance was stopped on July 1, 2020. Tens of thousands in hospital bills could not be reimbursed.

Several practitioners and their families were harassed in recent months by people from their residential committees, police stations, and work units. Ms. Zhao Longying was harassed seven or eight times in December alone. The harassers threatened to block her grandson from being hired as civil servant. Her daughter-in-law hence resents her. Ms. Zhao's home was ransacked. Four people were assigned to watch her closely.

Ms. Han Weifang and Mr. Wang Daiqing of Chongqing will be tried by the Chuanhui District Court, Zhoukou City, on January 14, 2021. The court notified their lawyers.

Ms. Zhang Shuxia is a fifty-eight-year-old practitioner. Her sister-in-law was harassed by Shen Fei from the suburbs Police and Legal Affairs Committee, and Liu Chi from the Changqing Township Judicial Office on December 17, 2020. They forced the sister-in-law to sign three statements for Ms. Zhang.

Ms. Liu Yi, a senior citizen, was arrested at home on October 28, 2010. Her Falun Gong books and Zhengjian periodicals were confiscated. She was taken to the local police station for interrogation, and subjected to 10 days' administrative detention.

The same day, Ms. Guo Changhuan was arrested at home by officers from the Changsha County Domestic Security Division and the Huanghua Police Station, as well as by clerks from the Xiangxiucheng Residential Committee. Her Falun Gong books, picture of the founder of Falun Gong, computer, printer, cell phone, and other items were confiscated. She was taken to the police station. One day later, she was taken to the Changsha County Detention Center for 15 days' detention.

Ms. Xiao Hongrong is a sixty-eight-year-old practitioner. Her son’s home was ransacked by four officers from the Sifeng Police Station on the evening of December 11, 2020. The officers seized a copy of Zhuan Falun and a cell phone. Ms. Xiao was not there.

Ms. Xiao was arrested by officers from the Sifeng Police Station in February 2002. She was subjected to a year of forced labor after she had been held for 40 days at the Jiamusi City Detention Center. On November 4, 2010, she was arrested by officers from the Jiadong Police Station, and detained for 10 days in the Jiamusi Detention Center. On December 17, 2014, she was arrested for supporting the practitioners being tried in the “Jiansanjiang case.”

Mr. Liu Wen was arrested at work, the Guangzhou Depot, by people from the local government, police department, and residential committee on the afternoon of January 7, 2021. His whereabouts are unknown.

Ms. Bian Limin and her family were stopped by Zhang Chunhui and others from the Dongguocun Township Political and Legal Affairs Committee on January 6, 2021 when the family had just taken a nucleic acid test in the community as required. The harassers ordered Ms. Bian to go to the township government and sign a guarantee statement. Ms. Bian and her family refused and managed to walk away.

Ms. Wang Yumei, Ms. Han Guirong, Mr. Liu Guoshun, and others were harassed by Sun Hongbin, agent from the Jincheng Township Judiciary Office. Sun ordered Mr. Liu and Ms. Han to pay 3,000 yuan each and claimed their names would be removed from an internet list afterwards. Both practitioners refused to pay.

Ms. Liu Zonglan and Ms. Cheng Xianmei repeatedly received harassing calls from Gao Liang, clerk from the Chengsan Community Office. Gao ordered them to sign a guarantee statement and threatened them with their children’s jobs and education. Both practitioners refused to comply. Gao then ordered Ms. Cheng’s family member to put pressure on her.

Ms. Yu Fengzhen was arrested at home by eight or nine officers from the Chengshan Town Police Station on December 9, 2020. She was first taken to a police station in the Zhuanghe area, then, the next day, to the Dalian Criminal Detention Center for 10 days' detention. She has been released.

The case against Mr. Yu Chunbo and his wife, Ms. Li Fengxia, a non-practitioner, was submitted to the Chaoyang District Court on December 30, 2020.