(Minghui.org) Today's news from China includes incidents of persecution that took place in 18 cities or counties in 11 provinces, where at least 162 practitioners were recently persecuted for their belief. 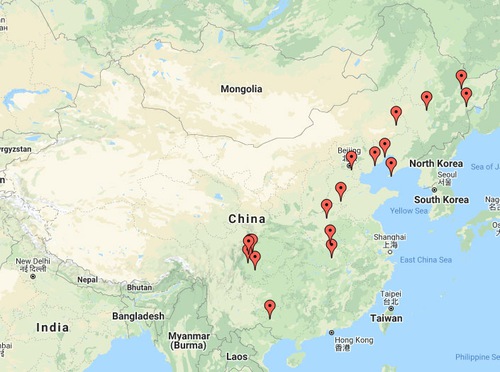 Four officers from the Nanquan Town Police Station went to Ms. Zhu Chaobin’s home and summoned her to the Shifang City Procuratorate on December 4, 2020. She refused to go with them.

When they started to drag her to the police car, she shouted, which alerted the neighbors, who gathered to watch. One officer called in two people from the procuratorate.

On December 13, the procuratorate gave Ms. Zhu a notice authorizing her to hire a lawyer to defend her.

Ms. Li Ying from the Development Zone was secretly tried via video link and sentenced to two years in prison. The court did not notify her family. She is being held in the Yaojia Detention Center. Only when her family called the police to demand her release did they learn she had been sentenced to prison.

Mr. Fan Zhigang and his wife Ms. Su Shuang were arrested on April 15, 2020. Their home was ransacked. They were tried at the Huludao City Detention Center by the Lianshan District Court on December 10.

The court issued a judgment on December 29, 2020. Mr. Fan was sentenced to one and half years in prison and fined 10,000 yuan. He was also sentenced to one year for the crime of “false accusation.” His total sentence is two years and six months.

Ms. Su was sentenced to nine months in prison for false accusation.

Officer Liu Yihong from Chengjia Police Station went to 78-year-old Ms. Peng Junying’s home and pressured her to sign the indictment on December 31, 2020. She refused to sign it. Liu said that, whether she signed it or not, the indictment would be filed at the procuratorate.

Mr. Xu Jianhua from Qinglong Town in the Pengshan District was harassed on December 31, 2020, by four people from the Guanyin Community and the Pengxi Town Police Station.

Five people from the Yaozhanzhuang Village Committee and North Industrial Park Police Station in the Haigang District went to Ms. Jia Guirong’s home and harassed her on December 30, 2020, disrupting the family.

Mr. Zhou Guoqiang, Mr. Zhang Bo, Mr. Xiong Youyi, and Mr. Li Jun were released on bail on December 25, 2020. They are in very poor health due to mistreatment in custody. They received notice on December 31 that they would be tried on January 3, 2021.

Officer Li Zhengwen from the No. 854 Farm Police Department went to Ms. Ding Junhua’s home but she wasn't there. Li then called Ms. Ding’s brother-in-law and asked if Ms. Ding had a computer at home.

Personnel from the Yanjiao Community in Sanhe City knocked on practitioner Lu Guansuo’s door on the evening of December 31, 2020. Lu did not open the door. They turned off the power to the home and left around 7:30 p.m.

Ms. Ma Fengcai from the Erqi District was arrested and taken to the No. 3 Detention Center in November 2020. Her case was turned over to the procuratorate.

Ms. Xu Yumei and Ms. Xu Jimei from Gantun Township were reported to the police for talking to people about Falun Gong at the Liulin Town Farmers’ Market on December 25, 2020. They were arrested by officers from the Liulin Town Police Station. They were forced to have a physical exam and take medicine for high blood pressure.

Ms. Huang Dongying from Tiandong County was arrested and her home ransacked by members of the local Political and Legal Affairs Committee and 610 Office in April 2020. She was removed from her teaching position.

After she refused to be “transformed” by local government agents, she was arrested and taken to the Qinzhou City Brainwashing Center in August.

Three officers from the Jiaoqu Domestic Security Division knocked on the door of 68-year-old Ms. Jiang Shuxian’s home at 10:30 a.m. on November 24, 2020. They ransacked her home without showing IDs or a warrant. They confiscated Falun Dafa books, a laptop, a printer, an MP3, a radio, and a USB drive.

Ms. Jiang and her husband were taken to the Aoqu Police Station and held in a small dark room.

The officers took her to a hospital for a physical exam. Her blood pressure was measured three times, with three different results. Later, she was taken to a detention center, which refused to accept her due to unstable blood pressure. The couple were released.

Based on incomplete statistics on Minghui.org, as of New Year’s Day 2021, about 126 Falun Gong practitioners in the Dalian area are still being held in prisons and detention centers.

There are two practitioners in Xihu Prison: Li Tianxue and Liu Xiyong.

There are two practitioners in the Dalian City Prison: Liu Renqiu and Hao Fukui.

There are three practitioners being held in the Pulandian Detention Center: Gu Yanqing, Zhang Qingtao, and Su Junsheng.

There are two practitioners in the Wafangdian Detention Center: Xie Bing and Yu Xichun.

There is one practitioner being held in the Shijiazhuang Women’s Prison: Liu Xia.

There is one practitioner in the Xinjiang No. 1 Detention Center: Pan Yanchun.

Zhao, head of Caijiagou Town; judicial officer Wang Yahui; and Party secretary Zhang Wen of Zhushan Village went to Ms. Yu Guifen’s home in Zhushan Village around December 13, 2020. Ms. Yu did not let them in. They pressured her to sign paperwork, but she refused.

They also called Mr. Wang Shutan and harassed him a while back.

Zhao and Wang went to Ms. Yu Xiulan’s home in Shaoguo Village and coaxed her to sign paperwork.

Several Caijiagou Town government employees went to the home of elderly Ms. Zhao in Wanjiatuozi Village and pressured her to sign paperwork, but she refused to.

They also went to Mr. Ren Changyou’s home in the Sanxingtun area and pressured him to sign statements to give up practicing Falun Gong.

They called Mr. Ren Qingji and harassed him.

In each instance they insisted: “If you simply sign the form, your name will be removed from the list, and we will not bother you in the future. From now on, your children and grandchildren can go to college, join the army, or take civil service exams unhampered. If you do not sign it, the future of your children, grandchildren, and even of their posterity will be adversely impacted.”

Personnel in the Sanchahe Town government resorted to the same tactic to harass Falun Gong practitioners.

Judicial officers in the town led by Gan Xiaowei, head of Dongjiuhao Village, went to the home of practitioner Liu Yongxue (gender unknown) and pressured Liu to sign paperwork. Liu refused. They then went to harass practitioner Wang Cheng.

People from the Xilin Police Station, the Yongping Community, and the Xiangyang District Political and Legal Affairs Committee went to the home of 56-year-old Ms. Liu Lijuan’s daughter on November 17, 2020. They told her to sign paperwork for her mother and prevent her mother from attending Falun Gong gatherings.

Director Huang of the Mazu Town Comprehensive Management Office in Shifang City, a government official, and a police officer went to where Ms. Zhou Min’s son works on December 21 and 22, 2020, and ordered him to sign the three statements for his mother. He refused. They threatened that if he did not sign, all three generations of his family would be implicated.

Her son’s supervisor talked to him on December 25 and said that the Political and Legal Affairs Committee had called and put pressure on him.

Yang Shaoqi from the Aoping Town government and officials from the Chengdu City government, Pengzhou City government, and Ziquan Village to Ms. Ran Hong’s home in the village and harassed her on December 28, 2020. They slandered Falun Dafa and told her to give up practicing. She refused and told them the facts about Falun Gong.

Party secretary Li Xiaoyun of a community in Sha’erhure Sub-district, Huolin Henan Square, and four others went to Ms. Yu Xiufen’s home on November 15, 2020. Ms. Yu was not at home. They called her the next dayand said they needed to talk to her in person.

All five again went to Ms. Yu’s home on November 17 and talked to her family members for over half an hour. They asked her husband for her phone number, but he did not give it to them. They said that they would come again.

Those five people went to her home again on November 18 and pressured her to sign “transformation” statements. She refused.

When they went to her home again on November 21 and ordered her to sign the “transformation” statements, she tore them up.

They went to her son’s workplace on December 4 and pressured him to sign, but he refused. They harassed Ms. Yu’s daughter-in-law and attempted to go to Ms. Yu’s grandchild’s school for harassment.

Ms. Yu Sufang from Huangchuan County was arrested by officers from the Beicheng Police Station on November 10, 2020. They ransacked her home and confiscated Falun Dafa books and a cell phone, among other personal belongings. She returned home around 9 p.m. that evening.

Ms. Guo Puqin from Huangchuan County was arrested by Domestic Security officers on November 30. They ransacked her home and confiscated Falun Dafa books, bank cards, and a cell phone, among other personal belongings. She returned home on December 1.

Ms. Li Dianqiu from Huangchuan County was arrested near the Xiya Supermarket around 10 a.m. on December 2. The officers ransacked her home and confiscated Falun Dafa books and other personal belongings. She was taken to the Xinyang City Detention Center. She returned home around 6 p.m. the following day.

Mr. Wei Yongbing from Huangchuan County was arrested at home by seven or eight Domestic Security officers led by Zeng Qingyun, a member of the Cotton Spinning Mill Community, around 9 a.m. on December 15. They ransacked his home and confiscated a computer, a cell phone, and Falun Dafa books, among other personal belongings. He was taken to the Hedian Detention Center. He has returned home.

“Do Not Casually Give or Accept Material Help”