(Minghui.org) Today's news from China includes incidents of persecution that took place in 16 cities or counties in 8 provinces, where at least 60 practitioners were recently persecuted for their belief. 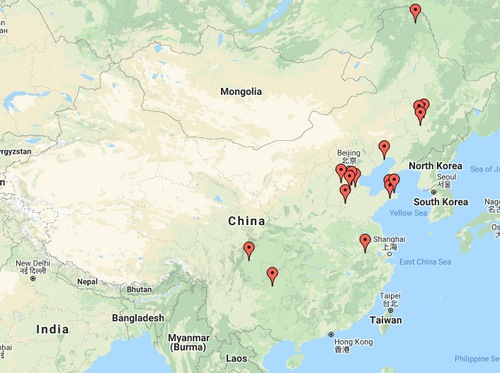 Ms. Ma and Ms. Zhang were arrested and detained in the Chiping District Detention Center on October 16, 2020. Ms. Ma was let go because she failed the required physical examination. Ms. Zhang was transferred to the Liaocheng City Detention Center. Their family members learned that they had been tried in court on November 23, 2020. Ms. Ma Yuzhi was sentenced to three years in prison. Ms. Zhang Wenling was sentenced to one year in prison. Ms. Zhang was scheduled to be transferred to the Shandong Women’s Prison on January 20, 2021.

Mr. Zhang Junfeng was arrested at his workplace. His home was then ransacked.

Mr. Zhang Jiguo was also arrested at his workplace, the Haiyang City Maternity and Child Health Hospital. Officers ransacked his home and confiscated many personal belongings, including a printer, computer and Dafa-related materials.

Mr. Wang Chenggang was arrested at home. His home was also ransacked. His Dafa-related materials and personal belongings including a computer, printer and cell phone were taken away.

Ms. Yang Yanxia and Ms. Xiao Jinzi were reported to police when they distributed cards with information about Falun Gong in Changchun City on December 23, 2020. Officers from the South Square Police Station arrested them and took them to the Weizigou Detention House for 15 days. While they were detained, their families were not allowed to visit them, with the pandemic given as the reason. After being detained for 15 days, they were taken to the No.4 Detention Center of Changchun City.

Ms. Liu Shuli was arrested at home on December 26, 2020, and taken to the Cangzhou Detention Center. Her home was ransacked twice. She was placed under official arrest on January 9, 2021. Despite the cold winter weather, her family was not allowed to bring her warm clothes.

Mr. Cui Yindai and his wife Ms. Han Min refused to give up their practice of Falun Gong during the CCP’s zero-out campaign. Both of them were taken to the brainwashing center held in the Yanshan Education Bureau, which lasted more than a month. The abuse caused Mr. Cui to develop symptoms of high blood pressure, and the detention center refused to admit him.

Soon after he returned home, he was arrested at home again on January 8, 2021. The details of his condition and whereabouts are unknown.

His wife Ms. Han Min has returned home. She was pale and weak.

Ms. Xiao Fengzhi was arrested on January 6, 2021, by officers from the Suizhong Domestic Security Division. She is now detained in the Huludao City Detention Center.

Mr. Li Jinmin and his wife from Dongyinjia Village were harassed at home five or six times by officers from the Zangjiazhuang Police Station, including Yu Xuegang. Their Dafa books were taken away. Yu Xuegang and other police officers also harassed two other practitioners in the same village.

Ms. Tu Xiaomin from Zunyi City has a younger sister in Beijing. At the end of December 2020, three people from Daozhen County, Guizhou Province, including the head of the Daozhen County Political and Legal Affairs Committee, traveled to Beijing to harass Ms. Tu’s sister.

Large scale arrests and home raids were conducted on September 27, 2020, by the Wuhu City Police Department. Many practitioners, including Ms. Yu Guiying, Ms. Yang Xiuying, Ding Qingli (gender unknown) and Ms. Lu Shoumei, were taken to different police stations but were released the same evening. Then, every practitioner was harassed at home by local police officers and community staff members. They were pressured to sign guarantee statements promising to renounce Falun Gong.

Falun Gong practitioners and their family members in Daxing’anling City have been harassed by local police officers from different police stations since September 2020. They were told to sign guarantee statements renouncing their faith, or their pensions would be suspended or their children would be implicated, such as being disqualified from taking the civil servant exam.

Ms. Song Meixiang was staying in another city, and her relative was phoned and told to sign the statement on her behalf.

Ms. Bai Guizhi, 80, was harassed at home twice by officers from the Hongqi Police Station. They said they would go to her home every day until she signed it.

Four or five people from the Changhong Police Station and the local community, including community director Liang Longjiang, came to harass 73-year-old Ms. Gong Benhua. Ms. Gong refused to sign the guarantee statement. They forced her family member to sign it for her.

People from the Shuguang Police Station, the Shuguang Sub-district Office, and the Shuguang Community came to harass 75-year-old Li Baomin (gender unknown) multiple times from October 20 to November 5, 2020. They also made harassing phone calls to Li’s family members. None of his family members complied with the authorities’ demands.

Several officers from the Shuguang Police Station came to harass Ms. Zhang Shulan in November 2020. Ms. Zhang refused to open the door for them even after they threatened to break it open. They returned the next day. Ms. Zhang was not at home. They called her husband to the community office to sign the guarantee statement on her behalf.

Ms. Zhang Guizhi, over 80, lived in her son’s home. Local community members located her in November 2020 and told her to press her fingerprint on the statement.

Officers from the Dongshan Police Station came to harass Ms. Liu Yaxiang. She refused to sign the statement. The officer threatened to suspend her pension.

Ms. Liu Fenglan, over 80, and her six children all received phone calls from the local community office demanding that she sign the statement. They also told her children to advise their mother to sign or to sign it on her behalf.

Officers from the Dongshan Police Station learned Ms. Cai Shumei’s home address and phone number from her workplace. They made harassing phone calls to her.

Ms. Sang Fenglan, Ms. You Shufang, Ms. Wang Shuxian, Mr. Li Weiliang, and Ms. Li Xueyan were all harassed and told to sign the guarantee statement. Their family members were harassed as well.

Ms. Chen Ping was arrested on January 10, 2021, for talking to people about Falun Gong in a Yuti market. She was taken to the Chengdong Township Police Station. Ms. Chen had symptoms of heart problems. Her family asked the village official to bail her out. Cao Qingjun, deputy of the police station, was on duty and claimed that it was not over and that they would call her at any time.

Mr. Li Fuquan,over 60, from Tangchang Town was arrested by local police officers at home on the morning of September 28, 2020. His wife Ms. Liu Kaiqiong, over 60, was not at home. She was in the county hospital taking care of her aunt. The police went to the hospital that afternoon and arrested her as well. Their 80-year-old mother, who is paralyzed in bed, is now unattended at home.

Ms. Li Shumei was arrested at home by officers from the Rushan Police Station at 2:30 p.m., on January 6, 2021. Her home was ransacked. All Dafa-related materials including Dafa books, Minghui Weekly and stickers raising awareness of the persecution were taken away.

Ms. Liu Cuilan was arrested at home at 2:30 p.m., January 6, 2021. Led by Liu Jie, head of the local 610 Office, officers from the Wenquan Police Station and the domestic security division arrested Ms. Liu and ransacked her home. All Dafa-related materials including Dafa books, Minghui Weekly and stickers were taken away.

The next day, January 7, 2021, Liu Jie and the other police officers arrested Ms. Fu Xizhen and Cong (first name and gender unknown) and ransacked their homes. Their Dafa-related materials including Dafa books, Minghui Weekly, stickers, and computers were taken away. They even took away items that belonged to Cong’s daughter.

All four practitioners were taken to the police stations for interrogation. They were released later that evening.

Ms. He Xiaoyan was arrested in July 2020. Her home was ransacked. She was subjected to residential surveillance for six months.

Ms. Cui Ying, 46, from the Automobile Factory District, was arrested at home on September 3, 2020, by officers from the Hongqi Street Police Station and the South Square Police Station. She was taken to the No. 4 Detention Center of Changchun City.

Ms. Cui’s case was transferred to the Chaoyang District Court on November 26, 2020.

Ms. Fu Guizhen from Wenquan Town was arrested at 11 a.m. on January 8, 2021. Her home was ransacked. Several New Year’s posters and one copy of Zhuan Falun were taken away. Ms. Fu was back home at 2 p.m. that day.

Mr. Song Haitao from Liujiatai Village was arrested on January 8, 2021. It is unknown whether he was released.

Ms. Jiang, who is disabled and lives in Wenquan Town, had her home raided on January 7, 2021. Six boxes of Dafa informational materials were taken away.

Ms. Chang Shuyan from Wenquan Town was arrested on January 7, 2021. She has returned home.

Ms. Cheng Guijun and Ms. Dong Jianmin were taken to a township government office after they talked to people about Dafa on the morning of January 10, 2021. They were then taken to the township police station at noon. Zhao Hua, head of the township police station, took the two practitioners to the county domestic security division after work hours. Both practitioners safely returned home.

Ms. Wang Zhonghua lives in Yangmulin Village. Village official Wang Guoxing and village security members jumped over the wall of Ms. Wang’s yard around 7 p.m. Ms. Wang was not at home. They forced her husband to sign the guarantee statement on her behalf. They also photographed a Dafa picture hanging on her wall and said they would send it to local police.

“How Miraculous Experiences Led a Qigong Practitioner to Falun Dafa”