(Minghui.org) During the dramas of 2020, many people in the West have witnessed how the Chinese Communist Party (CCP) covered up the coronavirus outbreak and deceived the world. Directly and indirectly, the CCP has also manipulated the U.S. general election to advance its communist agenda in the free world. This all seems shocking, but truly reflects the CCP’s nature – brutality, hatred, and lies.

Inside China where the CCP has been in power for decades, there are countless examples of its evil nature manifesting. One of the worst is the staged self-immolation incident aimed at framing Falun Gong, a peaceful meditation system based on the principles of Truthfulness-Compassion-Forbearance.

This incident occurred 20 years ago today, on January 23, 2001, Chinese New Year’s Eve. Five people set themselves on fire at Tiananmen Square, and the authorities quickly claimed that they were Falun Gong practitioners.

Despite the CCP’s notorious news censorship, the incident was reported by the CCP’s mouthpiece, Xinhua News Agency, in English two hours later. That evening, the video footage was played during prime time on a Central China Television (CCTV) news program, News Broadcast (Xinwen Lianbo), at a time when many Chinese families gathered in front of the TV to watch CCTV’s New Year Gala.

Less than two years before the incident, in July 1999, then CCP leader Jiang Zemin had launched a nationwide campaign against Falun Gong. He vowed to annihilate Falun Gong in three months with his persecution policy of “wiping out Falun Gong practitioners physically, destroying them financially, and ruining their reputation.”

When his attempts failed to make Falun Gong practitioners waver in their faith, Jiang and his accomplices plotted the self-immolation incident to stir up people's fear of and hatred towards Falun Gong.

In addition to continuous coverage of the incident, Jiang also ordered other programs on television, radio, and newspaper to keep slandering Falun Gong with the incident. Moreover, this incident was written into educational materials including textbooks, and other venues, to teach young students that Falun Gong made people go astray.

The staged self-immolation incident has become probably the single most harmful defamatory propaganda that has turned many Chinese people from sympathy to hatred towards Falun Gong.

Detailed analysis of the footage, testimonies of witnesses, and related reports can be found from the Focus Topic of Self-Immolation Hoax on Minghui.org. Here we briefly review a few major flaws identified from the CCTV video that show the propaganda was a staged incident.

Death caused by object hitting. Liu Chunling, a woman claimed to have been burned to death in the incident, was a key figure since her daughter was also in the incident. Video analysis indicates that Liu actually died from being hit by a heavy object wielded by a man in a military coat. 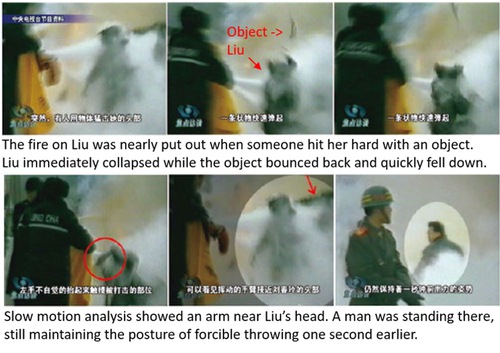 Able to sing four days after trachea was cut open. Liu Siying, 12, was the daughter of Liu Chunling. She was reported as having extensive burns and was hospitalized. Four days after her trachea was surgically cut open, however, she was interviewed by CCTV and even sang a song. This defied medical common sense. 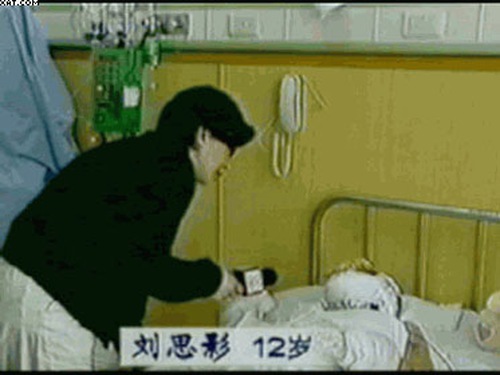 Liu Siying, 12, was interviewed by CCTV and sang a song four days after trachea surgery.

Atypical handling of extensive burning. Several survivors including Liu Siying were claimed to be suffering from severe burns over large areas of their bodies. When this is the case, ventilation is normally required along with strict infection controls, to facilitate recovery. But from reports by CCTV and other media, all of these victims were tightly wrapped up with many layers of gauze in Beijing’s Jishuitan Hospital. No precautions were in place, even when reporters approached them in close proximity.

Clothing was burned, but flammable substance was intact. One of the victims was claimed to be Wang Jindong. Although his clothing was heavily burned, his highly inflammable hair was fine, as was the Sprite bottle allegedly containing gasoline between his legs. Furthermore, the police officer who was holding the fire blanket was seen leisurely standing next to Wang for a while but did not put the blanket on Wang until after Wang shouted out a slogan claiming his affiliation with Falun Gong.

Wang’s hair and Sprite bottle were not burned. 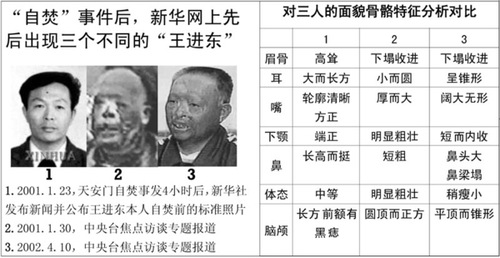 Face recognition experts identified three versions different from each other. Furthermore, as requested by the World Organization to Investigate the Persecution of Falun Gong (WOIPFG), the voice recognition lab at Nation Taiwan University performed analyses and concluded that the voices in version 2 and version 3 were not from the same person.

Efforts to Clarify the Facts

Besides all these flaws in the CCP’s reports about the self-immolation incident, it was highly suspicious that for such an emergency, the CCTV crew had professional setups for viewing it from different angles with various types of lens simultaneously.

Other than being interviewed as part of the official propaganda, all of the self-immolators were always isolated from the outside. CCP officials did not address these questions. Liu Siying, the 12-year-old girl, was later announced to have been out of danger, only to “die” soon afterward, leaving outsiders no opportunity to verify her version of the story.

International Educational Development (IED) raised this issue at a United Nations conference on August 14, 2001. The organization condemned the CCP’s state terrorism and pointed out that the staged self-immolation incident was a setup to frame Falun Gong. It also indicated that the incident involved deceit and killing. Based on video analysis, IED believed that the incident had been staged by China authorities.

People who have watched or read the video analysis would know that this false fire was a staged incident to slander Falun Gong. But a large number of Chinese have nonetheless been misled. To help inform the public about what was going on, Falun Gong practitioners in Changchun, Jilin Province, intercepted a cable television signal at 8:00 p.m. on March 5, 2002, and played the video analysis along with another video on Falun Gong, on eight channels simultaneously. The interception lasted for over 40 minutes, and hundreds of thousands of people learned the real story this way.

To punish practitioners for revealing the facts and to intimidate others, then CCP leader Jiang Zemin – who also launched the persecution in 1999 – issued an order to “kill without mercy.” As a result, the police arrested about 5,000 practitioners in Changchun. At least seven of them died from police and 15 more were sentenced to up to 20 years of imprisonment. Among them, Mr. Liang Zhenxing and Mr. Liu Chengjun were sentenced to 19 years, while Ms. Zhou Runjun was sentenced to 20 years.

This was among many brutal incidents committed by the CCP against innocent people in China. After suppressing people (peasants, business owners, intellectuals, and so on) economically in the 1950s, destroying culture in the 1960s, and eradicating the democratic movement in 1989, the CCP extended the terror to the faith of Falun Gong practitioners in 1999.

Similar to Nero in the ancient Roman Empire, who framed Christians with the Great Fire of Rome, the CCP has launched countless attacks on Falun Gong practitioners who follow the principles of Truthfulness-Compassion-Forbearance to become better citizens. As the CCP’s power has soared in the international community in recent years, more and more people are in danger by standing with the regime and betting their future on it.

Over 370 million people have now quit the CCP and its junior organizations, the Youth League and Young Pioneers. We hope more people around the world will break away from the CCP for a safe future.

“CCTV Reporters Must Have Known about the Staged Self-Immolation Beforehand”