(Minghui.org) Today's news from China includes incidents of persecution that took place in 16 cities or counties in 7 provinces, where at least 33 practitioners were recently persecuted for their belief. 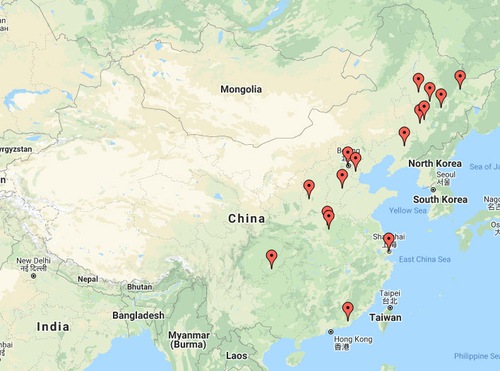 Ms. Yu Chufang, 70, from Kaizhou District, Chongqing, was sentenced to eight months in prison by the Lichuan Court, Hubei Province, in July 2020.

After being placed under residential surveillance for 3 months, she was arrested again and taken to the Lichuan Prison, Hubei Province, in November 2020.

After being placed under residential surveillance for a month, she was arrested again and taken to a prison. There is no information on where she is being held.

Ms. Zhao Wanjun was arrested by four officers, including Wang Hu from the Doudian Town Police Station, Fangshan District, on December 23, 2020. The officers ransacked her home and confiscated Falun Dafa books, a computer, and a cell phone. She was taken to a detention center and released on bail for health reasons. She was released with her son signing the bail paperwork. The officers threatened that if she continued to tell others about Falun Gong or distribute Falun Gong materials, her son would lose his job.

Ms. Yu Aiji was arrested by four officers, including Feng Yongxin from the Erdao District Domestic Security Division, when she was eating at a small restaurant on East Nanhu Road at around 6:30 p.m. on December 11, 2020. She is being held in the Changchun City No. 4 Detention Center.

Sun Gongwang, who was “transformed,” cooperated with the Changchun City Political and Legal Affairs Committee and the principal of Weizigou Central School in Jiutai City to harass Ms. Song Lijie.

They went to her workplace and pressured her to sign and agree to be “transformed” on December 22 and 23, 2020. Sun told her that his sister was also practicing Falun Gong and he was going to “transform” his sister. It was reported that Sun received 600 yuan twice from the government as a reward.

Ms. Li Yajuan’s family often receives harassing calls from the Jixian Sub-district Administration Office and residential committee in Beichen District recently. The officials asked Ms. Li to record a video of her making a statement that she no longer practiced Falun Gong.

At around 7:00 p.m. on December 30, 2020, local police officers, director Zhou of Jixian Sub-district Administration Office, and Zhang, a clerk of the office, went to Ms. Li’s home and pressured her to record the video.

Party secretary Yang Chunhua of Datang Town, Baodi District, and Ma Yongshun, head of Comprehensive Law Enforcement, deceived Ms. Tang Zhongzhen into signing paperwork. They threatened to send her to prison if she did not sign.

Three officers from the Gaocun Town Police Station, Wuqing District, ransacked Ms. Song Zurong’s home when she was not at home on the morning of December 28, 2020. They confiscated Falun Dafa books, a copy of Zhuan Falun, and weekly publications.

The homes of Ms. Feng Qingmei and four other practitioners were ransacked on December 30, 2020, by an officer from the Duizhu Town Police Station, a village official, and a county police officer.

They confiscated a box of Minghui Weekly publications from Ms. Feng’s home, and did not find anything at the homes of the other four practitioners.

Practitioner Chen Xingxing (gender unknown) is a teacher of Fenxi County No. 3 Middle School. Officers from the Yong’an Town Police Station and village officials ransacked Chen’s home on the morning of December 29, 2020, and confiscated Falun Dafa books and a cell phone.

Nine officers led by director Li Chengjie of the Qixing Police Station in Jiansanjiang area, broke into Mr. She Huaizhong’s home and ransacked the place on December 26, 2020. They confiscated Falun Dafa books, a computer, a laptop, and photos of the founder of Falun Gong.

Mr. She was taken to the Jiansanjiang Police Department. His nearly 90-year-old father was left unattended at home.

The police called these practitioners to report to the township police station every day. Now Ms. Wang alone has been required to go to the Jizhou District every day.

Officers from the Ganhechen Police Station in Yuanhui District broke into and ransacked homes of Ms. Yan Xueli, Ms. Chen Aihua, and Ma Huanyun (gender unknown) on December 22 and 25, 2020. The three practitioners were arrested and are being held in a detention center.

Ms. Lou Yahong was arrested and taken to the Yulin Lockup Center by officers from the Dingzhuang Township Police Station on the morning of December 15, 2020. She was transferred to the Detention Center at 8:00 a.m. on December 31.

Ms. Cheng Fengzhen was released on bail. Her case was turned over to the Procuratorate.

Ms. Kong from Kaiyuan City was harassed, threatened, and pressured to sign paperwork around November 20, 2020, by officials from local government departments at various levels, as part of the “zero-out” campaign. Ms. Kong did not cooperate, left home, and became displaced.

People from Yonghe Sub-district Administration Office and Tiebei Community, Shuangcheng District, called their families and pressured them to persuade Ms. Wang and Ms. Guo to write three statements, otherwise the two practitioners’ pensions would be suspended.

On the same day, Ms. Che was taken to a hospital for a physical examination, and then taken to the local detention center where she was given a five-day detention. Her son was pressured to sign paperwork and had 300 yuan extorted from him. He took his mother home from the detention center at 8:00 p.m. that evening.

The head of the retired employees and families section of Daqing Oil Field Nanyuan Industry Company called practitioner Huang Yunqing (gender unknown) and family and pressured them to sign a guarantee statement renouncing Falun Gong in September 2020. Huang refused. They threatened to suspend wages and adversely affect the futures of the children and grandchildren in the family. Huang and family still refused to sign the statements.

Ms. Peng was taken to the Guangdong Women’s Prison in December 2020. She called home from the prison. Her family learned that she developed skin disease as a result of abuse she endured in prison.

Mr. Huang is still being held in the detention center. He is in very poor physical condition and weighs less than 100 pounds.

“Staged Self-Immolation Incident: A Lie of the Century”

“New Practitioner: Being Grateful for Master’s Protection and Salvation”