(Minghui.org) Falun Dafa practitioners from Kumamoto prefecture gathered at the Chinese consulates located in Nagasaki and Fukuoka prefectures on December 31, 2020. They held up banners and signs with information about the 21-year-long brutal persecution of the peaceful spiritual practice.

Practitioners in Nagasaki and Fukuoka prefecture peacefully protest the persecution of Falun Dafa.

Practitioners held events at Nagoya Station in Aichi Province on January 9, 2021, to expose the CCP's (Chinese Communist Party) persecution of Falun Dafa and the live organ harvesting atrocities. They distributed information and collected signatures on a petition to bring Jiang Zemin, a former CCP head, to justice. 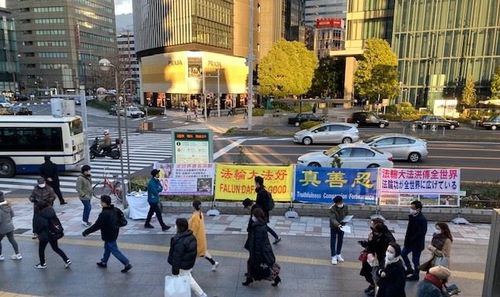 Peaceful Protest in Front of the Chinese Embassy

Jiang Zemin implemented the violent persecution of Falun Dafa in July 1999. Thousands of practitioners and their families lost their lives by either being persecuted, detained, tortured or having their organs removed while they were alive.

One Falun Dafa practitioner explained what motivated him to be there, “The Chinese Communist Party is the cause of all of this calamity. I wish for the world to be aware of how evil the Communist Party is. Only with justice, kindness, and courage can people defend themselves against the dark tide and restore mankind's true culture.

Nagoya Station is one of the most prosperous areas in the city. Practitioners held up banners at both exits of the train station. Practitioners also distributed fliers and collected signatures on a petition calling for former dictator Jiang to be brought to justice.

After learning about the CCP’s persecution of Falun Dafa, local residents encouraged practitioners and also signed the petition.

“Eliminating My Attachment to Watching Television”

“Don’t Yield to the Evil in the “Zero-out” Campaign”