(Minghui.org) Jean Robin, a well-known independent French journalist, has researched Marxism for more than 20 years. He has published more than 40 books and produced dozens of videos exposing the Chinese Communist Party (CCP)’s infiltration, especially in France. In a recent interview with NTDTV, he said the CCP should bear full responsibility for the spread of COVID-19, which has raged across the world, killing millions and destroying the global economy.

The CCP Kills People and Destroys the Global Economy, Just Like the Nazis

Robin compared the CCP to the Nazi regime in Germany. He said Hitler sent troops to conquer the world because of the collapse of the German economy at the time and that the CCP is in the same situation today, with its economy collapsed in 2019. No matter what the regime has said over the past years, it has to go outside to find opportunities for recovery, he said, adding that this is what the CCP wants to achieve with the pandemic.

He likened the pandemic to a new weapon of mass destruction: it doesn’t only kill people but also destroys the economy. It leaves behind many social aftereffects, causing chaos among people from all walks of like, and many people feel depressed. 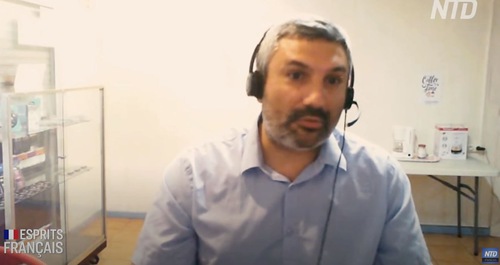 Jean Robin in the interview with NTD.

After in-depth investigation into the cooperation between France and China, Robin found that the CCP’s infiltration in France involves many sectors.

He gave an analytical example of how the CCP has supported France’s development. He further explained that current French government officials are members of clubs that are either directly managed or indirectly influenced by the CCP, such as the most prestigious France-China Foundation (La France China Foundation). The Paris-Shanghai Club is also quite influential. These are clubs in Europe, with their heads being members of the European Commission.

“There is also France-China Committee (Le Comité France-Chine),” he added, “which attracts three-quarters of France’s 40 big stocks (Cac 40) and a number of large and medium-sized enterprises operating for China (grosses ETI). There are also other clubs, such as France-China Fund (La Fondation France-Chine), which also involves important figures in finance.”

Robin said that he agrees with Senator André Gattolin that the establishment of sister-city relationships between the Chinese communist regime in the name of cultural exchange is in fact an act of infiltration and espionage by the CCP.

He believes that France is one of the countries in the world that have cooperated most closely with the CCP for a long time, and that the French government cannot shake off their responsibility for the CCP’s ability to raise funds and carry out blackmail in France today.

“I’m sure that as many as dozens of people in politics in France are subjected to such blackmail, and they therefore rely on the CCP, or directly engage in corruption,” he said. “It is very simple, and we know this is how the CCP operates. This is the devious nature of the CCP. They would use all possible and imaginable ways to achieve their goals without firing a single shot.”

He said that the CCP would first get hold of people’s possessions through corruption and fraud, and then subdue them ideologically. Since the French leaders are ideologically pro-Marxism and communism, and today’s French people are already used to this, they are no longer aware of what is happening, he said. When people do not know which dictatorship they are dealing with, they cannot fight the enemy. According to Robin, the CCP is the enemy and is clearly trying to rule the world.

The CCP Is the Main Enemy of Mankind

Robin holds the view that the CCP has plunged the global economy into disorder and hopeless devastation. “Many small businesses in France have been wiped out,” he said. “Unfortunately, the French people are already used to losing their basic freedom bit by bit and being ‘frogs cooked in warm water.’ During the pandemic, we have seen the chaotic measures taken in public health and the economy under the dictatorship. Small entrepreneurs and businesses do not depend on the state for a living, and yet their freedom is taken away. This is the implementation of a communist plan, but very few French people realize it is actually the implementation of the CCP plans in France.”

He said that in Europe, Sweden is the strongest in standing up to the CCP, the only European country that has expelled Huawei and Confucius Institutes from its land, and the only one that didn’t go into lockdown in fighting the pandemic.

Finally, Robin said, “The CCP is the main enemy [of mankind]. The CCP must vanish off the face of the earth. We know that its plan is to destroy everything, so we must stop the saboteurs.”

“The Final Judgment as Seen in a Dream”