(Minghui.org) Falun Dafa practitioners in Adelaide held activities outside the state library on North Terrace in the city center on December 27, 2020 and January 7, 2021.

Although it was nearly 40 degrees Celsius (104 degrees Fahrenheit) on January 7, many people signed the petition calling for an end to communism. 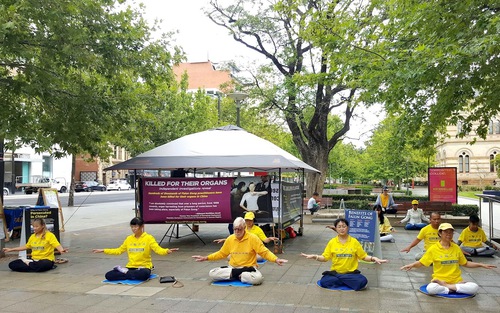 Practitioners in Adelaide demonstrate the exercises and inform people about the persecution in China.

Passersby sign the petition calling for an end to communism.

“The World Would Be a Better Place If People Followed Truthfulness, Compassion, Forbearance”

Rea, a Westerner, heard about the Chinese Communist Party’s (CCP) crimes against humanity and approached practitioners to learn more about the spiritual discipline. She was shocked to learn that the CCP removes organs while people are still alive and sells them for transplant. She immediately signed the petition. Her son Ned told practitioners he heard about the persecution in China by seeing practitioners’ activities in the city. He said, “The world would be a better place if people followed Truthfulness, Compassion, Forbearance.”

Phil and Sophie signed the petition to show their support after learning about the atrocities. Phil hopes people can learn to get along kindly with one another. He feels that if people follow the principles taught by Falun Dafa, they would enjoy good health. He is proud of Australia’s cultural diversity and that people are allowed to speak freely. 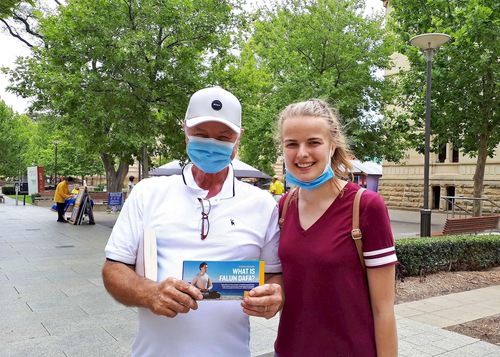 Phil and Sophie signed the petition after learning about the persecution.

Sophie thinks everyone should be concerned about the CCP’s persecution of practitioners. She said, “What you are doing, letting people know what is happening in China, is very important.” Sophie who is learning Chinese expressed joy at learning the Chinese characters for “Truthfulness, Compassion, Forbearance” and that Falun Dafa is part of traditional Chinese culture.

“The CCP Wants to Destroy Humanity” 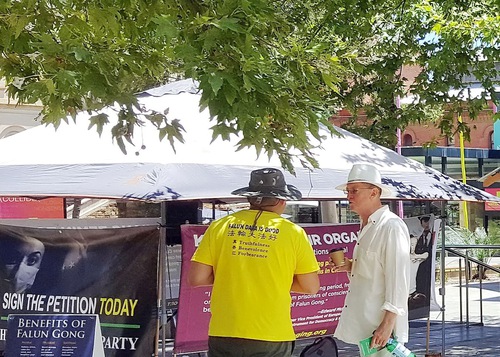 Bradike May believes God will return to save humanity.

Bradike May, a polish migrant and a Catholic, walked closer to read the information on display.

“The CCP wants to control people’s souls and destroy humanity!” he exclaimed. Communism was eradicated in Poland and anyone who promotes it can be arrested. He believes the majority of Chinese citizens in China are kind and righteous, but are scared to voice their opinion because the CCP is a dictatorship.

He said, “This is terrible! Even Hitler did not do something like this.” He signed the petition to end communism at once. Bradike loved watching practitioners do the exercises especially the sitting meditation. He said he believes God will return to save humanity and hopes practitioners will succeed in ending the persecution.

“I Can’t Wait for the CCP to Collapse” 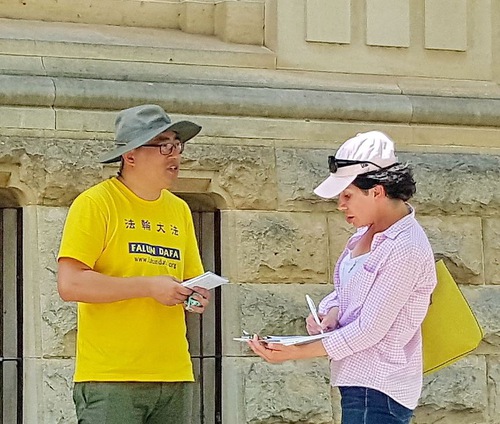 Natasha from Slovenia was shocked and sympathetic towards the long term persecution of practitioners in China. Slovenia was ruled by the Communist Party of Yugoslavia before it gained independence. She said her parents, who were teachers, had chosen not to become Communist Party members even though membership would bring some benefits and life was difficult then. They knew communism was bad and felt it would be against their conscience if they acknowledged it. After Natasha learned about the many terrible things the CCP did to practitioners, she signed the petition to end communism. She said she hopes practitioners will continue to raise awareness about the suppression.

A woman from China accepted a brochure from practitioners and said, “I know about this. I know about Falun Dafa, too.” She said, “I can’t wait for the CCP to collapse.”

Lalita Gilbert walked up to the information booth to sign the petition. She told practitioners that she’d read about the persecution on media reports many years ago and she has been paying attention to the issue since then. She knew about organ harvesting, too. She said, “You’re doing a great job!”

“The Story Behind a List of 10,000 Names: Supporting Goodness Brings Blessings”