(Minghui.org) Today's news from China includes incidents of persecution that took place in 17 cities or counties in 7 provinces, where at least 18 practitioners were recently persecuted for their belief. 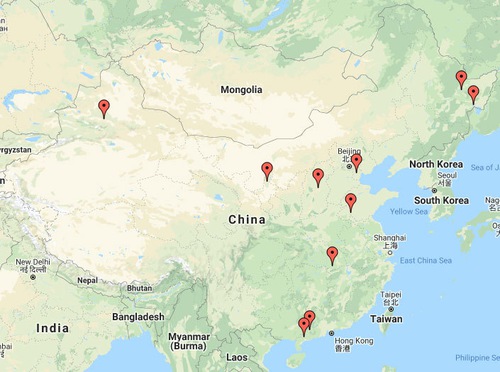 Ms. Shen was tried by the Yun’an District Court in November 20. She received the verdict in December and was sentenced to three years in prison. She appealed to the Yunfu City Intermediate Court.

Ms. Gu Xueshuang from the Binhai New Area was deceived to go to the Yueyuan Residential Community Committee on the afternoon of December 10, 2020, and was held there for over 20 hours.

During that period of time, over 20 people from the Hangzhoudao Sub-district Administration Office, the Hangzhoudao Police Station, and the Yuyuan Residential Community Committee pressured her to sign the three statements, but she firmly refused.

She returned home the following afternoon.

Mr. Zheng Yongxin and his wife Ms. Yang Jie returned to Zhongwei City to visit Ms. Yang’s parents in early October 2020, and have since lost contact with their family members.

Mr. Yu Jinguang from Wenquan Sub-district received a call from staff member Zhang of the Baicha Community on December 18, 2020. Zhang pretended to purchase purified water and asked where the storefront was located where Mr. Yu was selling purified water as part of an effort to collect information on practitioners.

Officers in a police car from the No. 3 Bridge Police Station also secretly took pictures of Mr. Yu with a cellphone.

Ms. Zhan Ying and her family were continuously harassed in November 2020 by people from the No. 23 Residential Community, the Xiangyang Sub-district, the local police station, and the Domestic Security officers. She was later taken to a brainwashing center, and has since been held there.

Mr. Fu Lianhua, Xu Rongshi (gender unknown), and Ms. Guo Shufen were arrested by officers from the No. 857 Farm Police Station, Mudanjiang Reclamation, on November 16, 2020. Mr. Fu was released for health reasons. The other two practitioners are still being held in the Jixi City Police Department.

Ms. Gao Jiju was followed and arrested by officers from the East Hongxing Road Police Station in Rencheng District on the afternoon of December 20, 2020.

Ms. Yao Yuling escaped. The court called off reviewing her case, and the police put out an arrest warrant for her online.

Officers from the Songlin Police Station and staff members of Linji Community knocked on the door of Ms. Qu Yuxia’s home on November 24, 2020, but she refused to open it. These people waited in the corridor and kept pounding on her door.

At about four o’clock in the afternoon, the officers outside the door began to kick the door vigorously. Then the officers called in a locksmith and removed the entire lock, handle, and peephole on the door. The parts were scattered on the ground and these people rushed to break into her home.

They ransacked the place and confiscated photos of the founder of Falun Gong, Falun Dafa books, a computer, and a printer. Ms. Qu was held at the police station overnight and was then told that she would be detained for 10 days.

Mr. He Weifeng, in his 50, is an employee of the Gaozhou Development and Reform Bureau.

His home was ransacked on December 16, 2020, by deputy head Zhou Weixue of the Gaozhou City Domestic Security Division, officer Feng Zengguo from the Chengnan Police Station, and half a dozen people, including staff members from the Political and Legal Affairs Committee, the 610 Office, and Sub-district administration office.

“My Understanding of Eliminating Depression”

“We Have No Reason to Be Discouraged”