When Peaceful Protests Turn “Violent” in the Shadow of Communism

(Minghui.org) Since the Chinese Communist Party (CCP) came to power in China in 1949, it has never stopped manipulating public opinion through lies and deceit.

While peaceful students held peaceful sit-in demonstrations at Tiananmen Square in June 1989, the CCP’s state media broadcast a charred corpse wearing a “Liberation Army cap” hanging on a highway overpass. The media claimed that the students had attacked and killed the soldier.

Zhao Zhen (pseudonym), who witnessed the entire incident, revealed that those violent “students” were actually soldiers in disguise. In the chaos, Sergeant Major Cui Guozheng was beaten to death with a metal pipe. Then the disguised students poured gasoline on him and set him on fire before hanging the body on the highway overpass. Zhao said that the attack was so precise and fatal that it must have come from someone who had undergone professional training. There were more than 100 onlookers at the scene, but most of the people and real students did not have any weapons in their hands, let alone iron rods, gasoline and the like.

Later, in the name of “stopping the riots,” tanks were brought into Tiananmen Square, and the People’s Liberation Army went on a killing spree.

Twelve years later, another strange incident took place at Tiananmen Square on January 23, 2001. A group of self-proclaimed “Falun Gong practitioners,” including both elderly and young women and a little girl, set themselves on fire at Tiananmen Square right before the Chinese New Year on January 23, 2001. The little girl’s mother died on the spot, and the girl was taken to the hospital and also died weeks later.

Falun Gong, also known as Falun Dafa, is a spiritual and meditation discipline that was being targeted in the incident. In July 1999, Jiang Zemin, the former CCP leader, launched the brutal persecution of Falun Gong. Jiang claimed that he would “eradicate Falun Gong within three months.” When public support for Falun Gong was on the rise two years later, he directed the January 23, 2001 incident.

After the incident, many people who had voiced their support for Falun Gong became silent, while others grew fearful of this peaceful group and thought the CCP’s suppression of them was well-grounded.

However, after careful examination by a group of international experts on the footage from the scene and investigation of the participants, it was found that none of the self-immolators were Falun Gong practitioners and that the woman who died on the scene fell after a man hit her in the head with an object. It was also strange that the police were able to find blankets and fire extinguishers immediately after the incident began.

When the Peaceful Protests in Hong Kong Suddenly Turned “Violent”

After the Tiananmen self-immolation hoax successfully turned a majority of the Chinese population against Falun Gong, the CCP gradually took its persecution and killing of Falun Gong practitioners underground. At the same time, with their membership in the World Trade Organization newly granted in late 2001, the CCP enjoyed the astronomical economic growth and quick expansion of its political power abroad. It grew so strong that many countries embraced its ambition to become the world’s top powerhouse.

When the extradition law was introduced in Hong Kong in 2019, the subsequent large-scale protests across the city and the protesters’ resilience took the CCP by surprise. While this time the CCP didn’t respond with tanks and guns, a violent incident took place on the evening of July 1, 2019, the 22nd anniversary of Hong Kong’s handover to China.

Because incidents of plainclothes police dressed as protesters had been reported, many people suspected whether those who caused the damage were again police officers in disguise. Hong Kong netizen David Ng openly expressed his suspicion on Twitter. He questioned whether the incident was staged in order to create a pretext for the CCP’s subsequent killing spree in Hong Kong.

In an interview with Voice of America, a resident from Shanxi Province in China, who requested to be anonymous, said that the millions of protesters reflected public opinion in Hong Kong and that the authorities might have been using the violence as an excuse to suppress the people of Hong Kong. He said it was necessary to investigate the identities of those who violently stormed the Legislative Council before drawing any final conclusions.

A Similar Scene at the U.S. Capitol

On January 6, 2021, just after 2:00 pm, when the U.S. Congress was about to count the Electoral College votes to certify the next president, a group of people broke into the Capitol building and caused Congress to be called into recess. Although the media described the intruders as Trump supporters based on their apparel, some were identified as Antifa members from their photos in previous Antifa protests.

Antifa is the abbreviation of Anti-Fascist, which originated in the 1930s. Participants in Antifa advocate violence and believe that violent attacks are a necessary means to promote anarchy. They oppose the government, hold positions of contempt for the law, and are regarded as an ultra-leftist group. Antifa in Italy and Spain directly pursued communism. In the U.S., they are striving to end the government and create a Stalinist state. “No more USA at all” is a slogan often used in Antifa protests.

It’s reported that an Antifa branch issued a reminder on social media before the election that they would have members wearing red Make America Great Again (MAGA) hats and disguise themselves as Trump supporters.

After the joint session reconvened in the evening, Rep. Matt Gaetz (R) from Florida directly pointed out that some of the people who broke into the Capitol were not Trump supporters but actually members of the violent terrorist group Antifa masquerading as Trump supporters.

He said to his colleagues, “This morning, President Trump explicitly called for demonstrations and protests to be peaceful… We should seek to build America up, not tear her down and destroy her.”

One video showed a number of police officers removing a barricade and letting the crowd into the cordoned-off area. Some netizens said that the protesters did not “break through” security, as the media had unanimously promoted, and that they were intentionally “let in.”

What’s more strange is that before the incident occurred, many media outlets already began to label the millions of peaceful Americans who went to express their voices as “thugs” who were planning a “coup,” as if the media knew in advance what was going to happen next. In the aftermath of the “breach,” some members of both chambers of Congress quickly flipped their positions, condemned the violence and labelled Trump as the chief perpetrator without investigation. 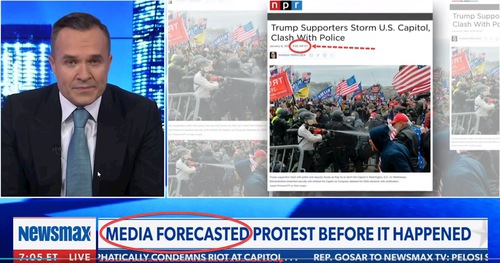 In the screenshot of a program by Greg Kelly with Newsmax, NPR reported on the clash as early as 9:33 am, hours before it actually happened.

What had happened in Hong Kong and at the U.S. Capitol are extremely similar in terms of how peaceful protesters were portrayed as violent rioters and how their voices went unheard. It’s also shocking to see how deeply the Communist Party has infiltrated the free island of Hong Kong and the beacon of democracy, the U.S.

In addition, how the police retreated and let the protesters enter the Capitol is similar to how the Chinese police directed 10,000 Falun Gong practitioners to form a line surrounding the central government compound in Beijing in a peaceful protest on April 25, 1999, three months before the persecution started. The practitioners were later blamed for trying to “besiege and overthrow” the government, which also became one of the main pretexts for the CCP to maintain the bloody persecution against them.

Throughout the thousands of years of traditional Chinese culture, people believed in the harmony of heaven, earth, and mankind. As such, they revered the divine, cherished the environment, and practiced kindness to others. In turn, they were blessed with health, safety, and prosperity for their honesty and integrity.

But the situation changed after the CCP took power in China seven decades ago. Through massive propaganda campaigns and violent political movements, the CCP forcibly pushed the communist ideology of hatred and lies and nearly wiped out traditional Chinese culture.

From Marx's Communist Manifesto to the Soviet Union and then to China, with lies on one hand and violence and trickery on the other, the communists have realized their plans step by step, trampling justice and kindness along the way.

We have seen that countries with the closest ties with the CCP have been hit the hardest in the pandemic. With the number of coronavirus cases quickly rising around the globe, humanity is facing a much more dangerous and deadly second wave.

No one can fool Heaven after all. Facing the impending calamities, one is only safe if one upholds righteous faith, conscience and justice.