(Minghui.org) Falun Gong practitioners held activities beside the Limmat River on August 22, 2020. They demonstrated the exercises and set up informational posters to expose the Chinese Communist Party’s (CCP) persecution, especially the state-sanctioned live organ harvesting from prisoners of conscience.

Many passers-by stopped to watch the exercise demonstration. Some accepted fliers, talked with practitioners, and signed the petition against the persecution. Several people learned the Falun Gong exercises. 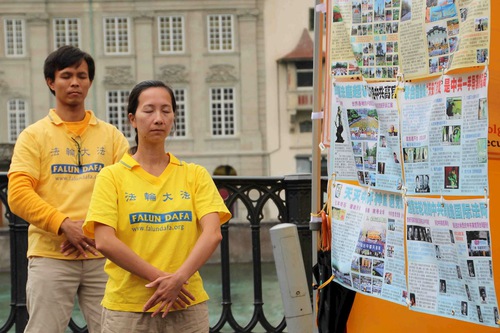 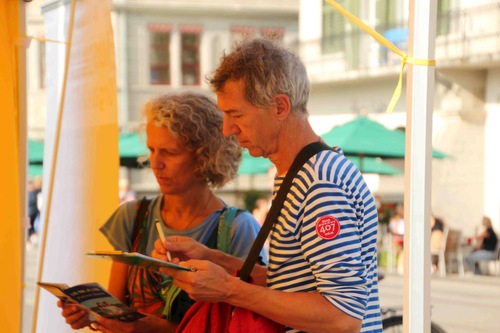 Cornelia Casutt said she'd heard of Falun Gong and the persecution before, but did not realize that it had gone on for more than 20 years.

“I think letting people know about the persecution and collecting signatures is good,” Ms. Casutt said. “I hope this can help practitioners and expose the persecution and the live organ harvesting. These things should not happen in China or anywhere.”

She signed the petition to condemn the persecution and to encourage Falun Gong practitioners. She said she appreciates Falun Gong's principles, Truthfulness-Compassion-Forbearance.

Roberto Negro was pleased to come across the practitioners' event and learn about Falun Gong.

“It's good to let people know that there are many injustices happening in the world, including in China,” said Mr. Negro. “I hope this [situation] can be improved.”

A woman who works for an insurance company stopped by to encourage practitioners and sign the petition.

“I wish to support Falun Gong practitioners,” she said. “The CCP should not disregard human life like this. Trampling human life – this really hurts me. I hope this never happens again. Human lives are very precious and should not be treated like this.”

She added, “I will tell other people about this persecution. People should pay attention to this topic. This will also support Falun Gong practitioners' efforts, so that such things [persecution of Falun Gong and live organ harvesting] will not happen again.”

Persecution of Falun Gong Is a Crime 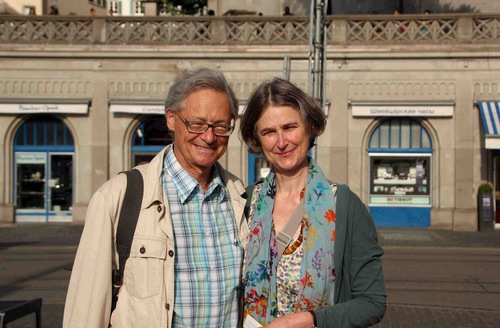 Priska Baur, an agronomist at a university, and her husband Juerg Minsch signed the petition calling on the Swiss Federal Government to help stop the persecution.

“Human rights and respect for human nature are very important everywhere in the world,” Ms. Baur said. “We know that people in China cannot express their opinions freely. Therefore, we are committed to allowing all people in the world to express their opinions freely, including the people in China to be able to decide the lifestyle that suits them, such as having their own beliefs, which is particularly important.”

“I know they [Falun Gong practitioners] cannot practice their belief in China,” she said. “Freedom of belief is very important. They are peaceful and should have their right to live freely and have their own belief. The persecution is terrible and a crime.”

She said she hoped that her signature would encourage the government to help stop the live organ harvesting. Her husband, an economist, agreed.

“I hope that more pressure can be exerted by signing the petition,” Mr. Minsch said. “The government may quickly ignore this topic due to economic reasons. I hope that this topic [live organ harvesting] can be taken seriously without [concern for] economic gains.”

He added, “Organ trading is dangerous. I am an economist myself, and organs as traded goods can cause crime, especially if the state government is also involved. It's just not feasible.” 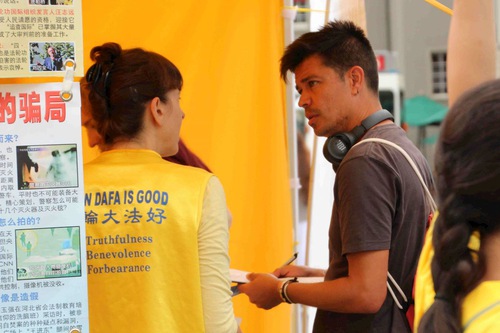 “Supporting justice is the biggest motivation for me to sign the petition,” said Fabian, an environmental scientist. “By signing it, I hope that this kind of problem [live organ harvesting] can be revealed to the world.

“This is terrible, and it really makes me feel sad. It is really despicable to treat them [Falun Gong practitioners] this way. I didn't know that such a thing was happening. I hope that more people will know that the entire country, the government, and all of us can work together to stop it.”

Fabian said that his recent experience and the changes in the whole world made him understand a lot at once. He said, “This world is not as beautiful as we thought, and there are still many diseases and injustices. We live in this world together, and it is best that we can work together and move forward together.”

He thought that the CCP persecutes Falun Gong for fear of losing control. “When the CCP notes that people are awake and do not like to be controlled, the CCP government feels this is a threat.”

Fabian appreciated practitioners’ efforts to raise awareness of the persecution. “You have done great. Thank you.” 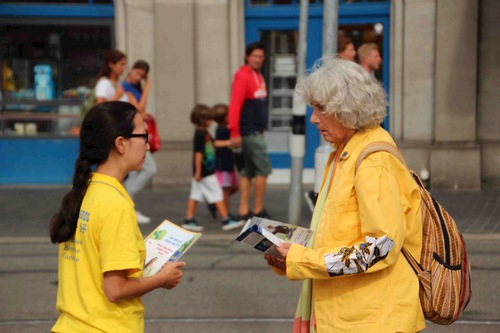 Nonnetta Tschanz, a physical therapist, said, “More people will know about this issue [the CCP’s live organ harvesting]. This is a crime!” She said she would tell people about Falun Gong and the persecution.

“Finland: Parliament Members and Citizens Support Falun Gong and an End to the Persecution in China”

“A Doctor Witnesses the Power of Dafa”