(Minghui.org) Today's news from China includes incidents of persecution that took place in 12 cities or counties in 7 provinces, where at least 32 practitioners were recently persecuted for their belief. 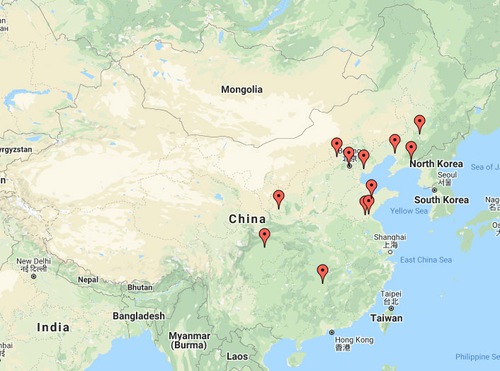 Ms. Qi Guiling from Dongtou Town, Yishui County, was being taken to the Yishui County Brainwashing Center by Yang Huanpu from the Comprehensive Management Office, led by village official Zhang Yujun in May 2020. Her family stopped the officials en route to the brainwashing center and successfully brought her back home.

On July 27, 2020, Ms. Qi was arrested and taken to the Yaodianzi Police Station. Her home was ransacked. She was released after blood samples were forcibly taken from her.

Junan County Domestic Security Division, the Chengxi Police Station, and the Chengbei Police Station dispatched a large number of police officers in a coordinated campaign, to arrest seven practitioners and their family members at about 6 a.m. on August 11, 2020.

Mao Dejun, 66, is a retired middle school physics teacher in Northeast China, whose personal belongings worth tens of thousands of yuan were confiscated by the police.

Mao’s case was turned over to the Junan County Procuratorate by the Junan County Police Department, which issued the official arrest warrant. Mao was locked in an iron cage for four days in the Chengxi Police Station and taken to the Linyi City Detention Center on the afternoon of August 14.

Ms. Yin Lanhua and Mr. Yue Changyou were arrested on July 6, 2020. The police tortured Ms. Yin in order to extract a confession and tied her to a chair for three days at the Xiangyang Police Department.

Seven people, including an official from the Cangxi County Political and Legal Affairs Committee and Yang Zuoping, head of the Cangxi County Domestic Security Division, ordered the head of the Guojihuayuan Residential Community security team to cut off Ms. Ren Xiaoqiong’s water and electricity on the morning of June 28, 2020. At the time when the water and power were cut off, Ms. Ren was taking a shower at home.

These people then coerced her to open the door. They forced their way in and searched two wooden boxes. They did not find any Falun Dafa books or materials, so they left. Before leaving, they said they would visit her again this time next year.

They returned to Mr. Dai’s home two days later, intending to force him to sign three statements they had prepared.

Na Junjie, an official from the Shengli Sub-district Committee, went to Ms. Li Lichun’s home. Na did not find Ms. Li at her home, so Na went to her child who attends high school. Na asked the child for Ms. Li’s phone number and said, “I was responsible for ‘transforming’ her.”

Several people from the Dixiongshan Village Committee went to Ms. Wang Guixin’s home and told her to sign paperwork. They threatened that if she did not sign, they would call in higher officials from outside the village.

Officers from the Xiaojin Town Police Station and judicial officers went to knock on Ms. Jin Xiulan’s door twice on the morning of July 13, 2020. Ms. Jin was not at home that morning.

They went to her home again on the morning of July 27. They forcibly took photos of her, asked for her national ID card, and confiscated photos of the founder of Falun Gong and her own photos. They also took pictures inside her home.

They came to her home for the third time on August 5 and harassed her. Ms. Jin stopped them.

They phoned and threatened her family members. They demanded they sign multiple guarantee statements to renounce Falun Gong and took photos of Ms. Li.

Mr. Lu Lifa and Mr. Zhou Zeman from the Fengnan District were arrested on August 12, 2020. Their homes were ransacked.

Mr. Jiang Tao from Fengtai District was arrested by officers from the Shangdi Police Station in Haidian District on August 12, 2020. Seven or eight officers ransacked his rented home in the morning. His mother was notified at 8 p.m. that evening that he was being held in administrative detention for 14 days.

Mr. Yi Zhiyuan, in his 70s, was arrested by officers from the Lukou Town Police Station on January 7, 2020, for talking to people about Falun Gong. He had been held in custody for over seven months. While he was away, his home was ransacked several times. His case was withdrawn four times by the Procuratorate. He was released on July 23.

The local officials demanded that practitioners and family members write guarantee statements renouncing Falun Gong. They threatened that if they did not write the statements, it would affect their children's (or grandchildren) ability to go to school, join the People’s Liberation Army, take exams for civil service positions, etc.

Ms. Wang Yulian from Huanggainao Town is in her 60s. Li Zhijun, the township head, and other people ransacked her home at noon on July 23, 2020. They confiscated five Falun Dafa books and 640 yuan in paper bills with Falun Gong messages printed on them.

Her son, who is paralyzed due to a cerebral hemorrhage (stroke), has to be fed liquid food to sustain his life. He was frightened into a convulsion when the officials ransacked the home.

Ms. Zhao Ning, in her 60s, from Fengyuandian Township, Huyuan County, was twice harassed at home by Liu Shudong, deputy Party security of the township, and other people in July 2020. They told Ms. Zhao to sign a guarantee statement renouncing Falun Gong. She refused. They confiscated a photo of the founder of Falun Gong.