(Minghui.org) Falun Gong practitioners held an event in Berne, Switzerland, on August 29, 2020, to help people learn more about the persecution of Falun Gong in China.

Nicolas, a retired physiotherapist, listened to a practitioner tell about the Chinese Communist Party’s (CCP) persecution and its state-sanctioned organ harvesting from living Falun Gong practitioners. “You [Falun Gong] practitioners are attempting to let people know about this. That makes me really admire you,” he said, as he took off his hat and bowed in salute.

Nicolas looked at the images of the positions for the Falun Gong exercises carefully. He told a practitioner he had started doing yoga and similar practices when he was 18 years old. He accepted a Falun Gong flier and said he was interested in learning more. 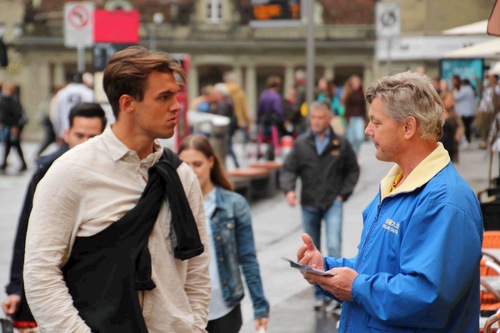 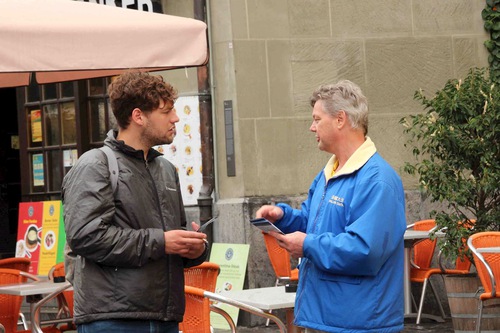 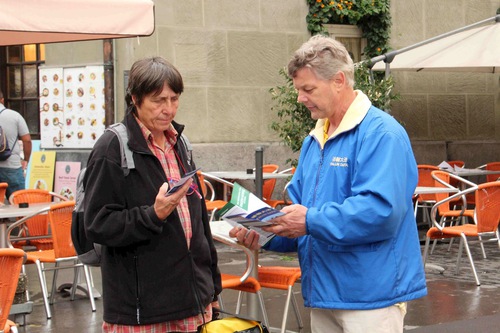 Passersby pause to learn about Falun Gong on Kornhausplatz in Berne on August 29, 2020 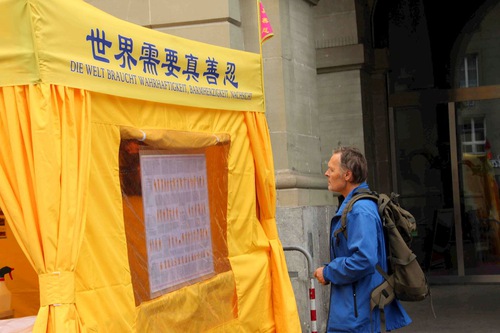 A practitioner told Nicolas that, throughout the 21-year-long persecution, the CCP has tortured Falun Gong practitioners and even killed them for their organs for profit. The brutalities in China are ongoing.

“That is cruel,” Nicolas said, adding, “We may have seen it [organ harvesting] in science fiction films decades ago but never thought it would become a reality. People really thought it was just a fantasy, but it has become a reality. In fact, this is a topic relevant to each of us. I oppose it.”

He said he would share the information with his friends and relatives. He also said that such crimes would be stopped sooner or later. 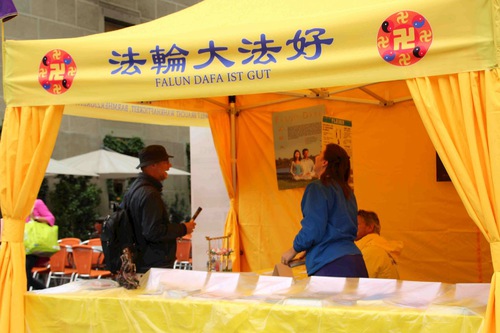 A passerby talks with a practitioner.

A man named Peter said to a practitioner. “People should not be persecuted for their beliefs. People should have their own thinking and beliefs. The persecution relates to power and paranoia. There is no reason for such fear, and people should be allowed to live freely.”

He was deeply upset to hear about the CCP’s state-sanctioned live organ harvesting. “That is inhumane,” he said. “The doctors involved should be stripped of their licenses and locked up in prison.”

Ursula, who worked in special education prior to retirement, took a flyer and talked to practitioners to learn more. She told a practitioner that she used to contribute to protecting Chinese people's human rights.

“The persecution tramples human rights and prevents people from living the way they should,” Ursula said. “Humans should abide by ethical standards and not compromise to power.”

She said the CCP’s crime of forced organ harvesting from Falun Gong practitioners is wrong. “It should not be happening. It is a violation of human rights,” she said.

She signed the petition to protest the persecution and said she did so to help all Chinese. She wished that human rights would be respected in China.

Some passersby said they knew a little about Falun Gong and then talked with practitioners to learn more. Some took photos of the large “Falun Dafa is good” banner.

“My Husband Hasn’t Always Been So Supportive of Dafa”