How Cancer Led a Businesswoman to Find Hope

(Minghui.org) When Luo Lihui was 22 years old, her goal was to make a fortune while she was young and then retire early. She worked as an IT professional for an electronic supply company. Many people admire the steady incomes IT professionals enjoy, but Luo wondered if she could continue working 12-hour days under high pressure. She began to wonder if it was really worth it.

When she was 30, someone recommended she try direct sales. She felt selling dietary supplements would not only bring her quick money but could improve her health. She quit her job and began doing multilevel marketing.

To fulfill her big dream, Luo worked day and night and put all her energy into it. Her hard work began to pay off and, within three years, she achieved a very high level in the company.

But it did not bring her happiness. “When I reached the top, I found the ugly side of human nature—you get rich at the cost of the down line distributors,” she recalled. “I made lots of money, but my good friends lost a lot. I felt very bad.”

Because of this experience, she began to doubt her dream of “Working hard for three or five years, and then enjoying life.” Just as she was debating whether she should continue pursuing multilevel marketing or listen to her conscience, a physical exam changed everything. Her doctor told her, “You have Stage IV cancer.”

Also known as metastatic cancer, Stage IV is the most advanced stage and it means the cancer already spread to other organs. This information was so unexpected and sudden that Luo did not know how to react. While lying in the hospital bed waiting to undergo chemotherapy, she felt close to death. “I felt helpless. There was nothing I could do except whatever the doctors and nurses wanted,” she explained.

Her circumstances were so dire that Luo decided to stop worrying. “I made out my will with instructions on how to handle my assets. I decided if I die, then I'll just die!” She said, “I only felt sorry for my mother. It upset me because, although I was an adult, my illness caused her to worry.”

For the first time Luo began to reflect on her life. “While doing multilevel marketing, I only thought about success and making money at any cost. But when I got everything I worked so hard for, it meant nothing without good health to enjoy it.”

While suffering agonizing pain day and night to the point where she was unable to sleep, Luo began to think about her life and who she really was. “Although everything I worked so hard for seemed to mean nothing, I felt life was giving me a hint through this illness. Instead of rushing forward for money and pleasure, I should rethink my life,” she explained. “If I didn't have cancer, there is no way I would have calmed down and thought about this.”

During those dark and gloomy days, Luo received lots of advice from her friends and relatives.

“One auntie suggested I try practicing Falun Dafa. I asked her how much it cost,” she recalled, “She said it cost nothing—not even one penny. She said Falun Dafa helps people to become better citizens and it directly targets a person’s heart. Those words touched me and I knew that this was something I had been waiting for,” she said.

In the beginning, Luo did not know what cultivation practice meant; she simply followed the others to read the teachings and to do the exercises. Soon afterwards, she learned the importance of forbearance. Especially when doing the fifth set of exercises, the final few minutes were very difficult to endure. Whenever she nearly cried because of the pain, she would remember Master Li’s words in Zhuan Falun,

“When you are overcoming a real hardship or tribulation, you try it. When it is difficult to endure, try to endure it. When it looks impossible and is said to be impossible, give it a try and see if it is possible. If you can actually do it, you will indeed find: 'After passing the shady willow trees, there will be bright flowers and another village ahead!'” (Lecture 9, Zhuan Falun)

Because she was determined to cultivate, her body was also purified. “After I began to practice I discharged dark blood. In the beginning, I was a little scared. Other practitioners shared with me Master’s words from Zhuan Falun,

“In ordinary human society, you compete with others for fame and personal gain. You cannot sleep or eat well, and your body is in very bad shape. When your body is seen from another dimension, the bones are all black. With this body, it is impossible for you not to have any reactions when it is purified all at once. Thus, you will have reactions.” (Lecture 2, Zhuan Falun)

With those understandings, I calmed down and the discharge also stopped. My entire body became healthy and I felt calm and relaxed,” she said.

After she became a practitioner, Luo decided to try to become a better person by following the principles of Falun Dafa, Truthfulness-Compassion-Forbearance. As she made breakthroughs with the sitting meditation, she also gained new understandings about life, society, and the universe.

Her parents always took care of her and Luo could get almost anything she wanted. “I had a strong ego and always expected others to listen to me,” she said. “After I began practicing Falun Dafa, however, I started to look within. I realized everything around me is closely related to my cultivation.” 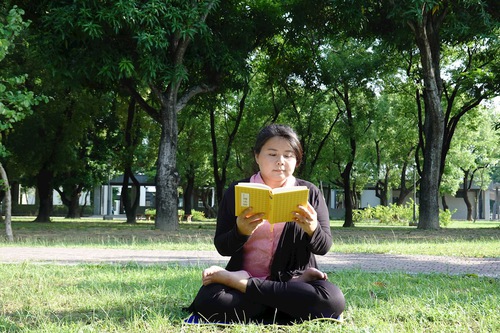 Before she began practicing, whenever she had conflicts with others Luo always thought it was the other person’s problem. “Now, my first thought is: Is there something I could have done differently? Do I have any issues that caused this?” she explained.

Looking back at her life, Luo now understands nothing she experienced was accidental. “There are deep reasons behind why things happen,” she said.

Her heart broadened and she even forgot the cancer she had about 10 years ago. Although she's now 40, she looks younger than when she was 30. Her parents are also very pleased. Her father often exclaims, “Falun Dafa is really awesome!”

“Learning to Stand on My Own in Cultivation”