Stockholm, Sweden: Police say, “You Should Practice Falun Dafa as the Practitioners Are Always Peaceful and Calm.”

(Minghui.org) Falun Dafa practitioners in Sweden held introductory activities at Mynttorget in Stockholm on August 21, 22, and 25, 2020. Many people stopped to talk with practitioners and learn about this ancient spiritual practice. 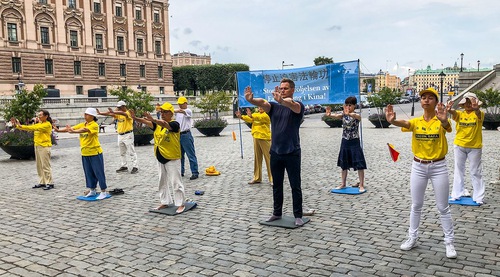 Practitioners demonstrate the Falun Dafa exercises at Mynttorget in Stockholm. 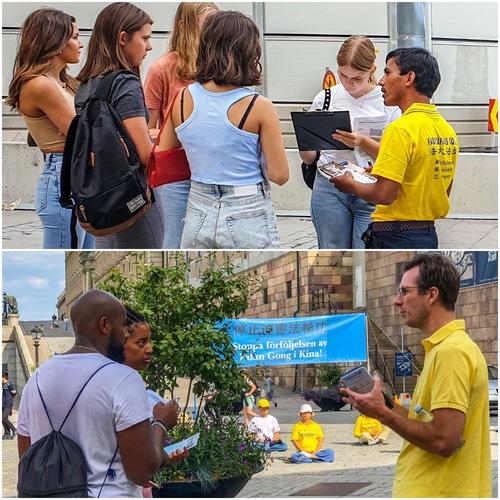 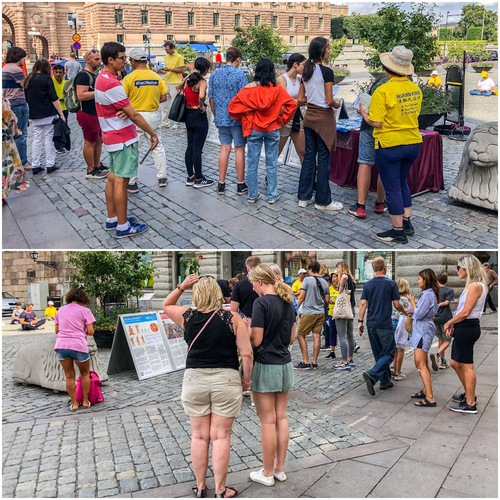 So that more people could learn about Falun Dafa and how the Chinese Communist Party (CCP) is harming mankind, practitioners applied for a police permit to hold additional activities on Fridays at Mynttorget. The application was quickly approved. Because practitioners’ activities have been so peaceful throughout the years, the Swedish police trust them. The officers on duty have often praised Falun Dafa practitioners and told other groups of protesters, “You should practice Falun Dafa, as the practitioners are always peaceful and calm.” 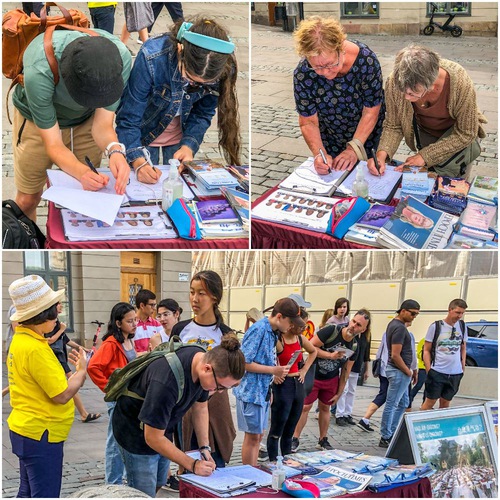 People sign a petition to encourage and support practitioners’ efforts to end the persecution.

Several groups of middle-school students happened to be doing some social research on Friday. They carefully read the practitioners' informational posters, watched them meditate, and also listened to a practitioner talk about Falun Dafa. They lined up to sign the petition calling for an end to the CCP’s persecution and took several photos to help spread the word. A student named Amira said she was happy to meet practitioners and learn what was happening in China. She said that signing the petition to stop the persecution made her day more meaningful.

A young man stopped and read every display board about Falun Dafa. He said he couldn’t imagine that the CCP so terribly persecutes such a peaceful group of people. “The Communist Party is so evil,” he said. The young man signed the petition and said he wanted to learn to practice Falun Dafa.

A group of young ethnic-Russian people was angered by the CCP’s atrocity of harvesting organs from living Falun Dafa practitioners. All of them signed the petition. One of them said, “All Chinese people should step up and drive out this totalitarian government!” They encouraged practitioners to never give up.

A woman told a practitioner, “I've personally experienced living under a dictatorship. Beliefs are not allowed because a regime is most afraid of the power of beliefs...The Chinese Communist Party is a demon. The way they treat people is absolutely appalling. I understand what you are doing and I admire your courage!” The woman signed the petition and took copies of the introductory flyers so she could tell more people about it.

Upon hearing about the CCP’s organ harvesting crime, a couple from Iraq said they had heard that some children in China were kidnapped and had their organs stolen. The couple was saddened to know that people living under Communist rule have lost their conscience. The wife said, “Such a large, state-sanctioned murder is very serious! People should know about it.” They said they fully support practitioners’ call for the Swedish government to take action.

“Arrested While Studying Book of His Faith, Hunan Man Sentenced to Four Years”