Belgium: People Condemn the Persecution of Falun Dafa During Event at Chinese Embassy

(Minghui.org) Falun Dafa practitioners held a rally in front of the Chinese Embassy in Brussels on September 22, 2020 to protest the recent escalation of the persecution. In April, the Chinese Communist Party (CCP) initiated the “zero out” campaign, an effort to arrest and detain practitioners and force them to stop practicing.

At least 5,313 practitioners were arrested and harassed in over 28 provinces in China in the first half of this year.

The practitioners called on the international community to pay attention to the CCP’s 21-year-long persecution. They also called for disintegration of the Party to end the persecution. 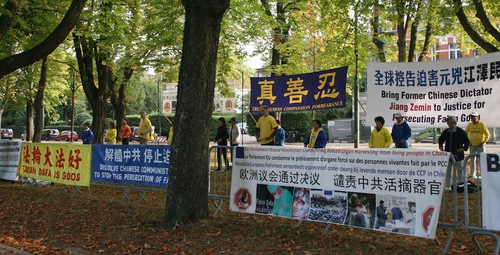 Practitioners peacefully protest the CCP’s persecution in front of the Chinese Embassy in Brussels on September 22, 2020.

Guillaume and his friend frequently travel, and they've seen practitioners’ events in Canada and Hong Kong. They were in Hong Kong when the CCP implemented the National Security Law and witnessed the CCP’s suppression of freedom.

“The CCP is a disaster for free countries,” Guillaume said, “It targets both individuals and society. Some governments do not dare resist the CCP regime, as they depend on China strategically. Many bad things happen in China. Every one of us needs to do something.” 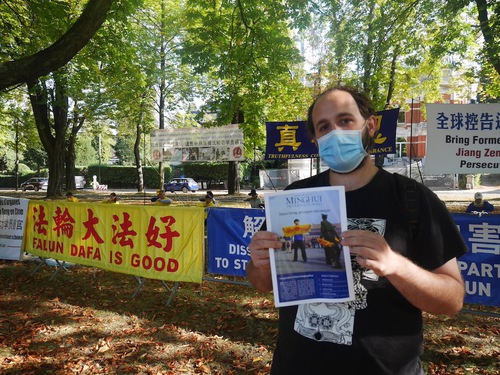 Guillaume said he witnessed how the CCP suppressed freedom while he was in Hong Kong.

“The CCP regime conducts live organ harvesting for lucrative profit,” Guillaume said, “What kind of government does such things? Only demons do this.”

“Persecuting groups who have spiritual beliefs. Freedom of belief is first, followed by government power. The CCP regime does not allow freedom of belief, but destroys temples and suppresses Muslims in Xinjiang. Because of this behavior China is a dangerous country,” Guillaume said.

Two police officers, Sylvie and Isabelleur, passed by and were curious about the persecution of Falun Dafa in China. A practitioner explained that Falun Dafa is a self-cultivation practice that the CCP has targeted for persecution, especially the state-sanctioned live organ harvesting for lucrative profit.

“Do your events have any impact?” one officer asked. When they were told the European Parliament passed a resolution calling for an end of the persecution and the live organ harvesting, and that Belgium's government blocks citizens from having organ transplants in China, they encouraged practitioners to keep up their efforts and help end the persecution as soon as possible. 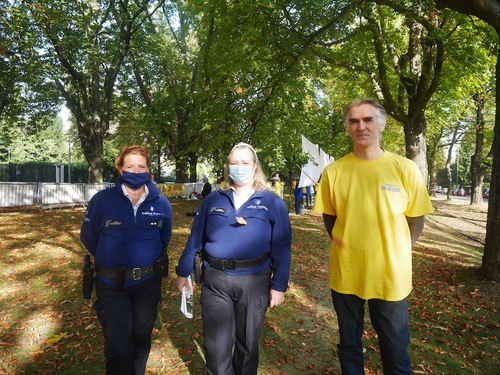 People Learn about Falun Dafa and the Persecution

While riding near the event on his bicycle, Geert read the banners. He said, “The CCP uses economic interests to subdue the international community. You are courageous to stand up to them. I support your efforts against the persecution. Good luck!” 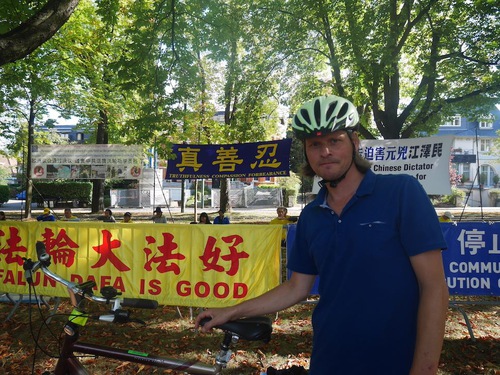 Marianne Douyot noticed the event on her way to work. She listened as a practitioner told her about the 21-year-long persecution. She said, “I have heard about this before. I will read the flier and browse the Internet to learn more.”